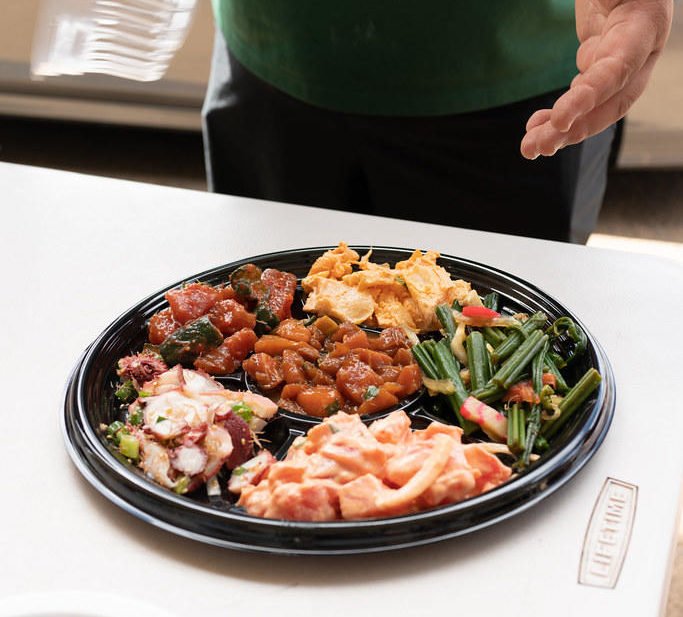 You are here: Home / Places to Eat in Hawaii / What Is Poke?

Poke is Hawaiian dish of diced raw ahi tuna mixed with Hawaiian sea salt, inamona (kukui nuts), and ogo (seaweed). There are many variations. Poke is so trendy now, but we ate this often growing up in Hawaii! 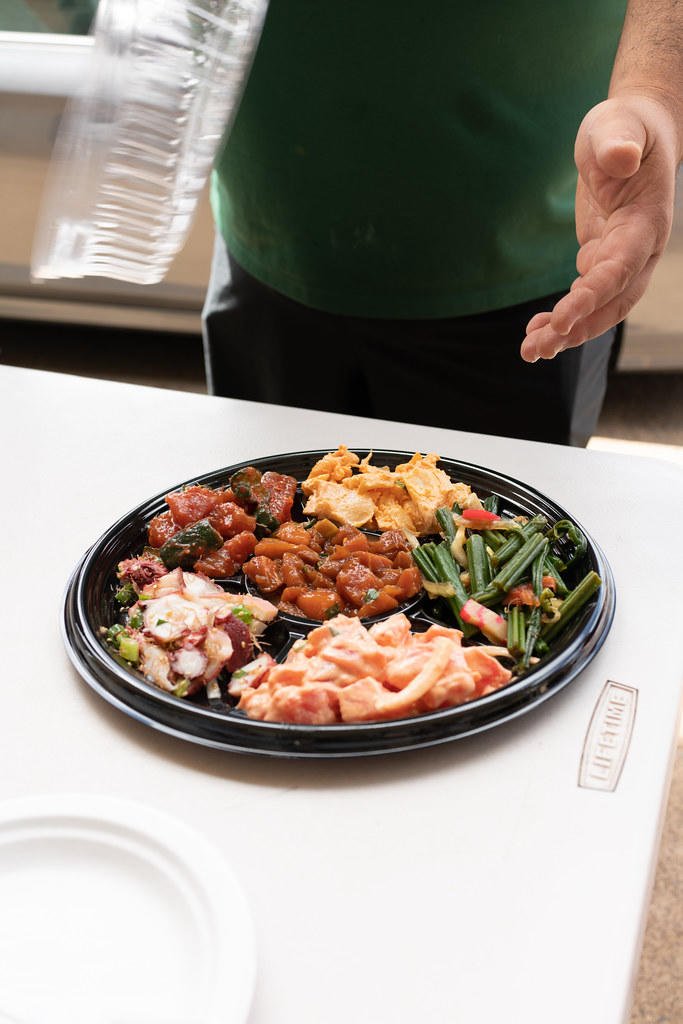 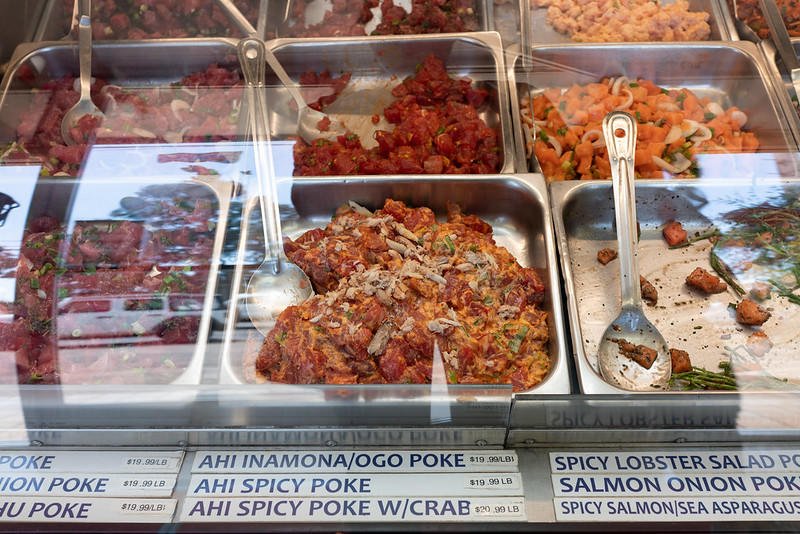 Poke is all the rage these days, which is funny because we ate (and still eat!) poke all the time in Hawaii. Poke isn’t considered rare or exotic, it’s just another onolicious food item that we find everywhere in Hawaii. #LuckyWeLiveHawaii 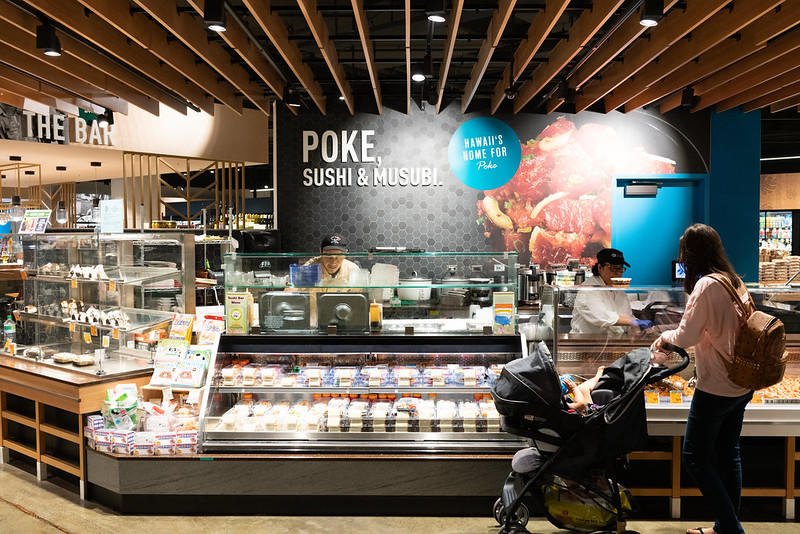 The Main Ingredients In Poke

Let’s take a look at the four main ingredients:

The raw ahi is diced into small, bite-sized squares. Then mixed with the other three seasoning ingredients and served chilled. 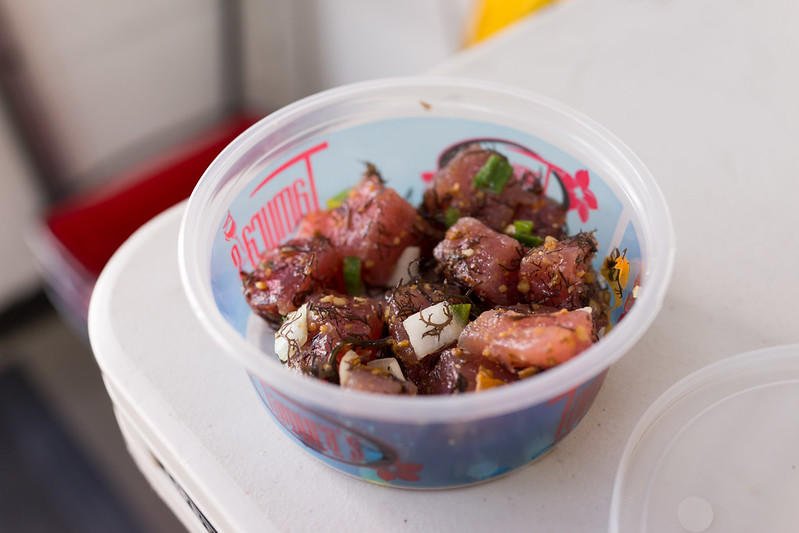 Poke has always been around (perhaps taken for granted) here in Hawaii. Around 2012, poke started suddenly appearing everywhere. Mainland media publications published poke recipes, television cooking shows featured poke, all these poke shops opened on the mainland (and even in Asia and Europe), and poke started appearing at fancy restaurants. It was like going zero to a hundred…poke everywhere! It happened fast (and it’s still happening now, just at a slightly slower pace).

In Hawaii, we marinate the fish with the seasonings/toppings. Everything is mixed in together.

On the mainland, the fish is: 1) often not marinated, and 2) the toppings are put on top of the fish (not mixed in). 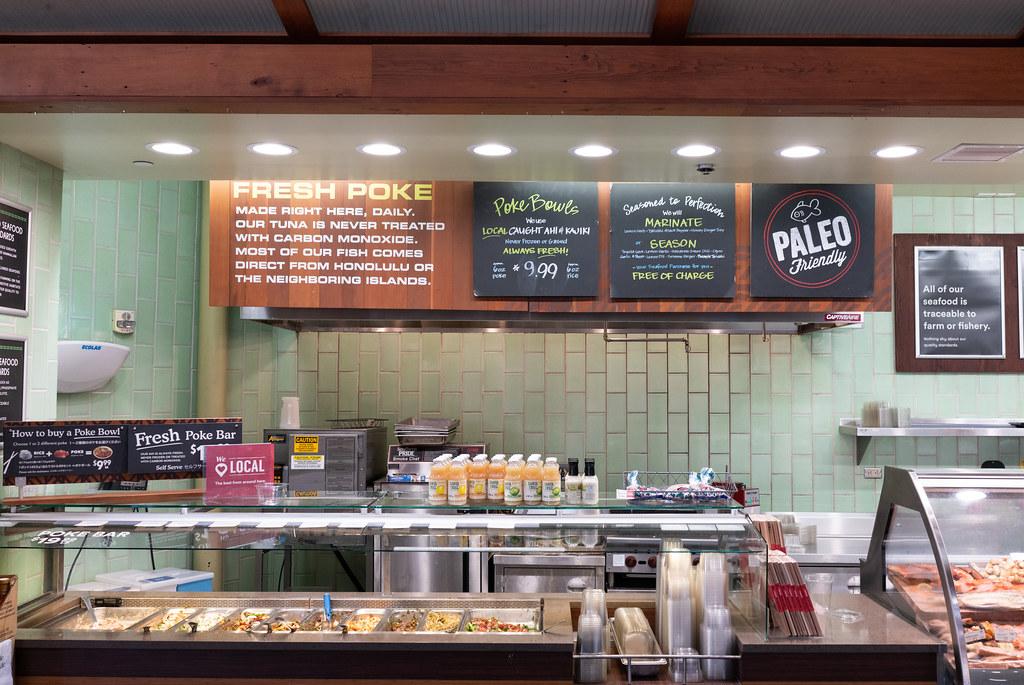 When we eat poke in Hawaii, its because it’s delicious and so fresh. But when all the mainland poke shops opened, they advertised “poke bowls,” as a healthy alternative to whatever else you were planning to eat. Now all of a sudden poke was health food! So strange. I think for many Hawaii people, to see this huge, worldwide (we recently saw “Hawaiian poke bowls” offered on the restaurant menu of Paris hotel) poke craze take off was part flattering and part insulting (man the way some places bastardized poke, it was enough to make you furious!) There was, and still is, some drama over how poke has been interpreted outside of Hawaii.

Who knew right?? All we just wanted was poke and rice for lunch ^_^ 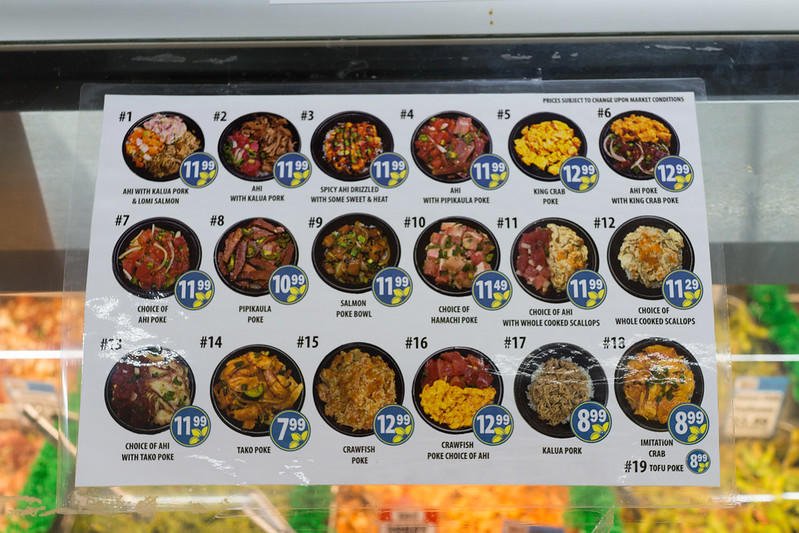 How to Pronounce Poke

Poke is a Hawaiian word. You must pronounce each syllable for Hawaiian words. There are two parts/syllables to poke:

Poooooh-keh! (Not poke, like when you poke your sister 🙂 ). 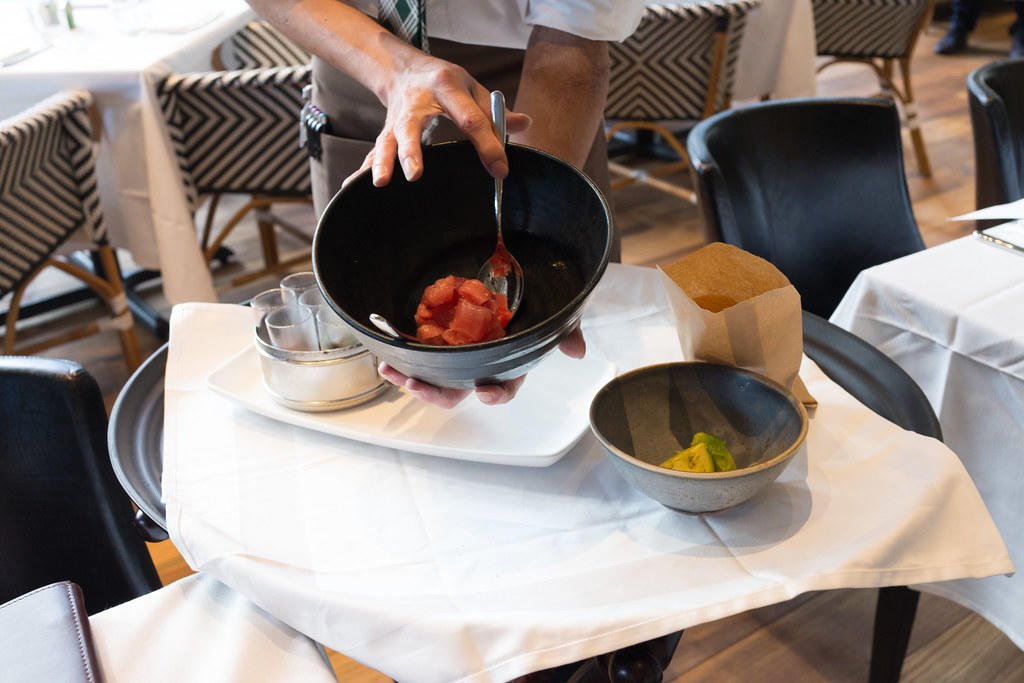 Where Did Poke Come From?

There is no definite answer, but it’s understood that poke “descended” from other types of Polynesian raw fish dishes like Samoan oka i’a and kokoda from Fiji. 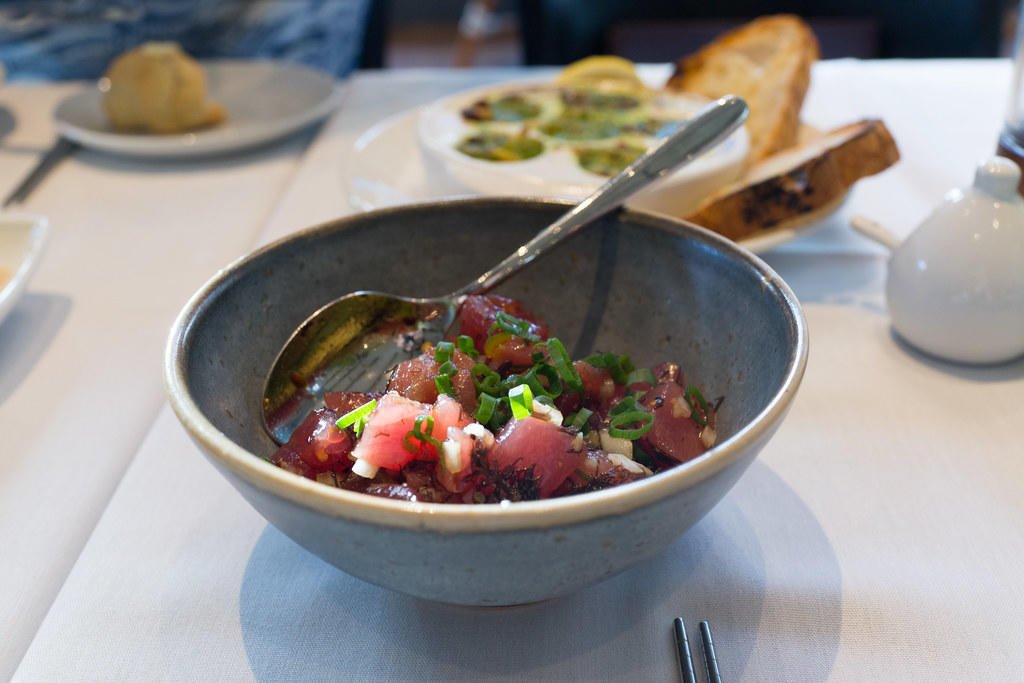 How To Eat Poke

You eat it with rice! “Poke bowls” are trendy. 99% of the time when you see poke on the mainland, it’s in the form of a “poke bowl,” aka poke over a bowl of rice (or salad – which is weird!)

It’s different in Hawaii. Yes, you can have poke bowls. But it’s more common to buy poke by the pound and eat it from the container. Rice is served on the side.

Example? My friend Steph and I are going to get poke for lunch, and we’re going to eat at her house (because many poke shops don’t have seating). We’ll go to a poke shop, order 2-3 types of poke (usually two kinds ahi poke and one kind of non-ahi poke like salmon or tako poke). We get 1/2 pound order of each. Then drive to Steph’s house and cook rice. We keep the poke in the fridge while rice is cooking. Once the rice is done, we scoop it into bowls and eat it with the poke! That’s how you eat poke.

Another way poke is eaten is at family gatherings, garage parties, and potluck parties. Guarantee someone will show up with a big platter of poke (it’s not a party without poke). The poke goes on a big table (along with lots of other food) and everyone will eat it like an appetizer. You have a can of beer in one hand, and a toothpick in the other (to pick up the poke 🙂 ). It’s a shared experience. 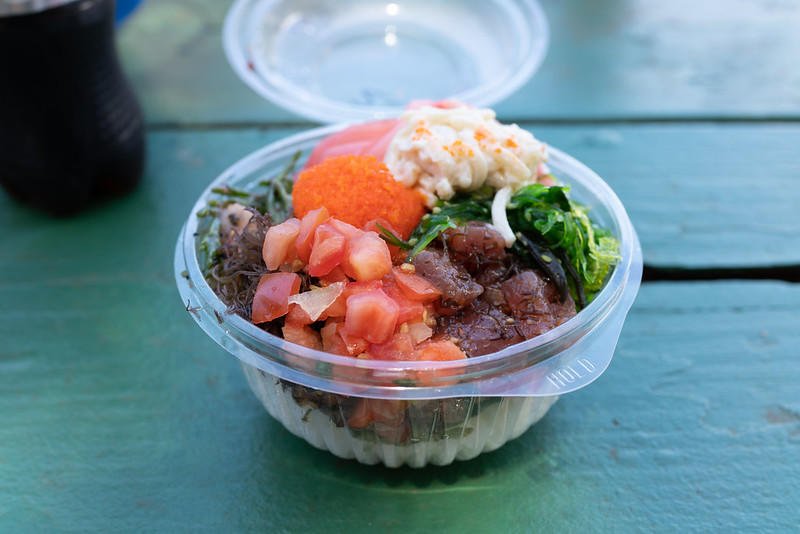 The only times we eat “poke bowls,” is when we eat poke on the spot/at the poke shop/office lunch. Other than that, we buy poke by the pound and take home. Even when we take poke to the beach, we purchase by the pound and keep it in the cooler. The rice goes in a separate container. We want warm rice and cold poke! 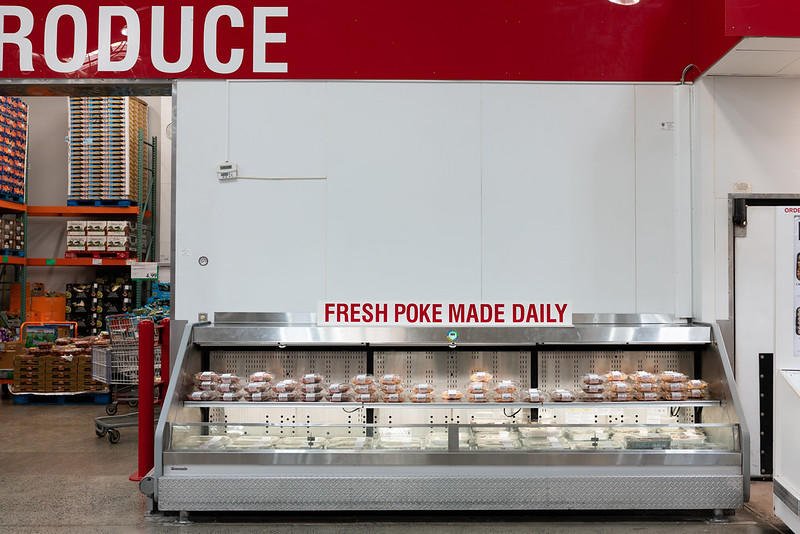 There are SO many kinds of poke. There is classic poke with sea salt, inamona, and ogo. There’s shoyu (soy sauce) poke. Or you can get a spicy ahi poke (plenty of mayo involved, but you know how we love mac salad)… 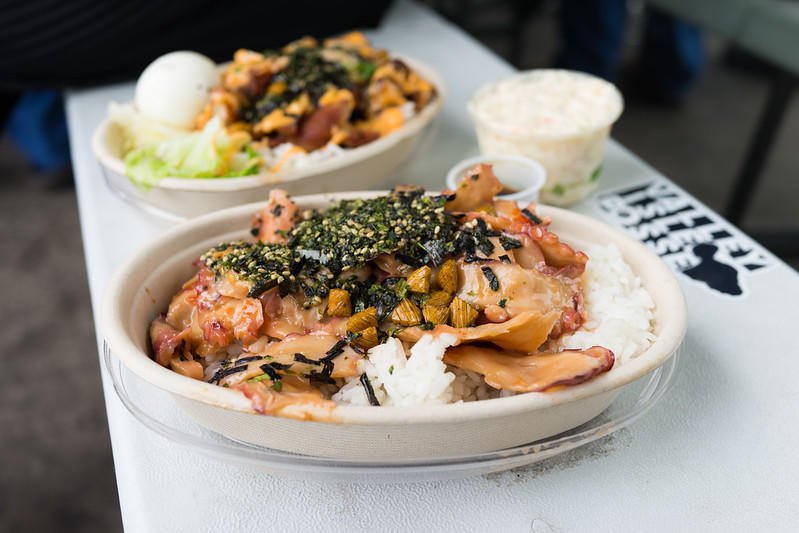 Then there is a whole different category of “new/modern” poke with all sorts of unexpected ingredients. Most poke is made from raw ahi, but you’ll also find salmon poke, tako (octopus) poke, etc. See below for popular types of poke in Hawaii! 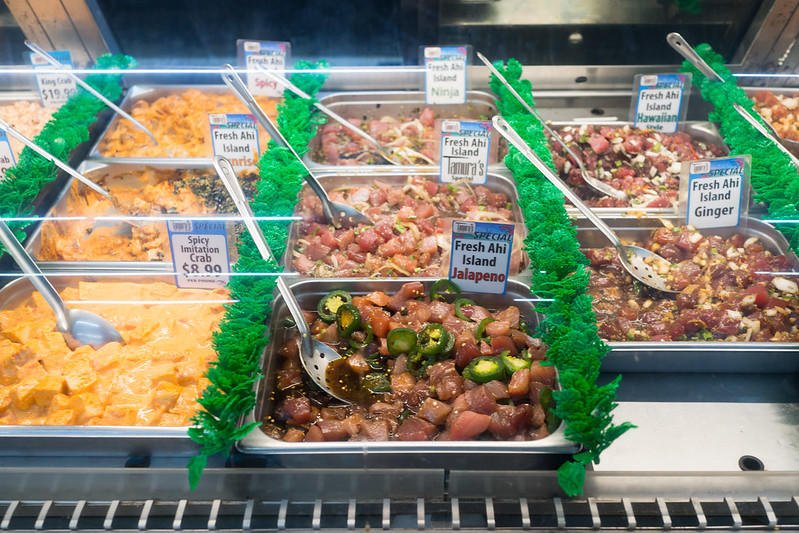 Hawaiian-style poke – The traditional poke featuring ahi with sea salt, inamona, and ogo. You rarely find this at poke places on the mainland. It’s a must-try when in Hawaii.

Spicy poke – Ahi tossed with a mayo-based “sauce,” made spicy with Sriracha and speckled with tobiko or masago. This is an indulgent and fatty poke. I love all the mayo, and my mom can’t stand it haha. 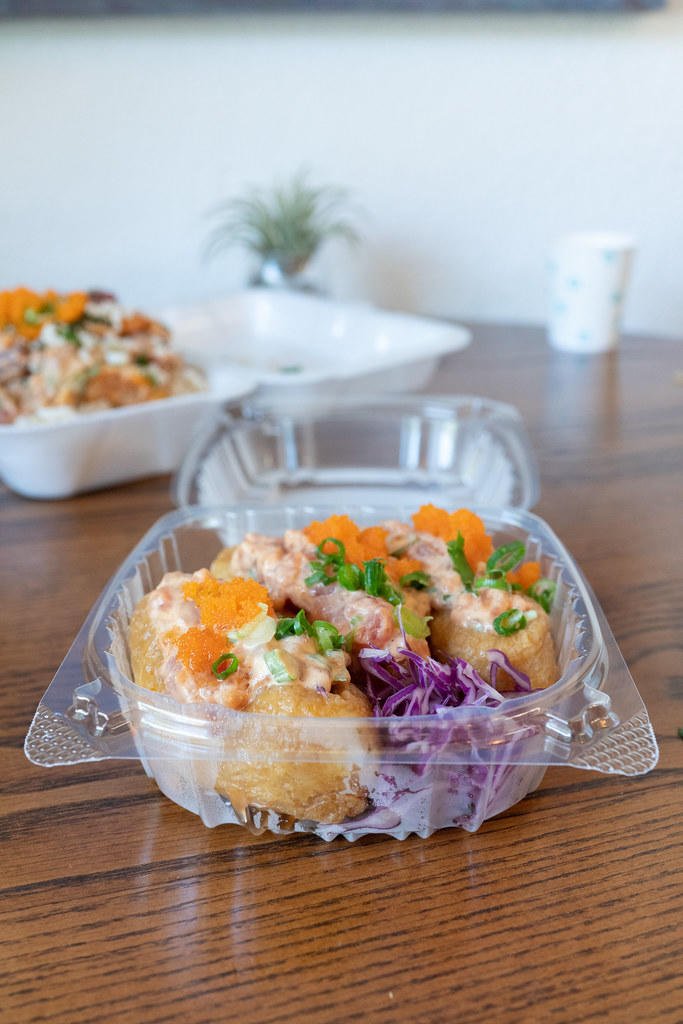 Cold ginger poke – You know that famous “cold ginger chicken” dish (similar to Hainan chicken)? It’s poached chicken with a ginger/scallion sauce. But here the chicken is replaced with ahi! You can find this at Off the Hook Poke Market in Manoa (Oahu).

Wasabi masago poke – Lots of the newer/modern types of poke are more saucy/wet, but not wasabi masago poke! This one is packed with lots masago on every surface of the ahi and just a hint of wasabi in each bite. This is one of my all time favorite poke creations. Find this at Yama’s Fish Market (Oahu).

Many toppings – You see all those colorful poke bowls on Instagram? The ones with a million different (always bright and eye catching) toppings? Like corn, jalapeno, mango, cucumber, etc. Those photos come mostly from mainland poke shops. In Hawaii, it is traditionally fish on rice, none of these “extras.” But since poke got so popular on the mainland, some of the new poke places in Hawaii started incorporating these extras. It’s crazy. Poke started in Hawaii. Then the mainland “took” it, and added a mainland twist. Then poke “came back” to Hawaii. Now some Hawaii poke has some mainland elements. Circle of life. 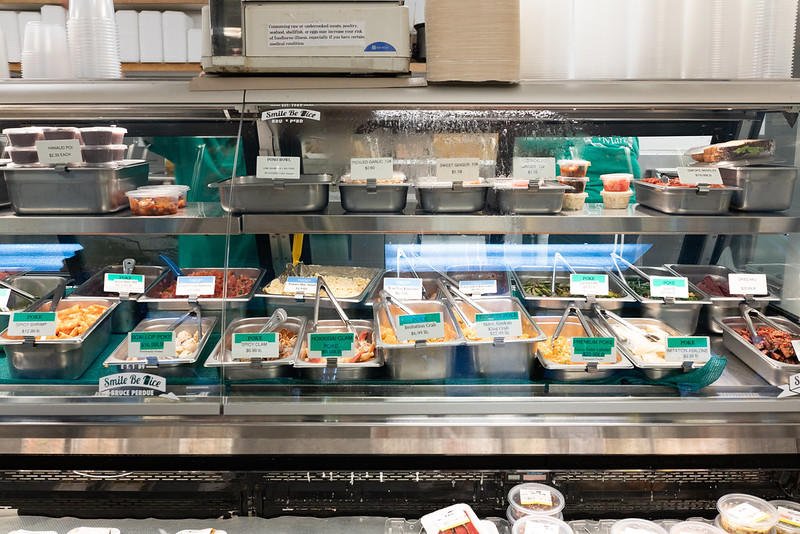 There are base “rules,” to follow but there’s no definite right or wrong recipe (I say this on many Hawaii food posts, but it’s true 🙂 ). What are the rules: 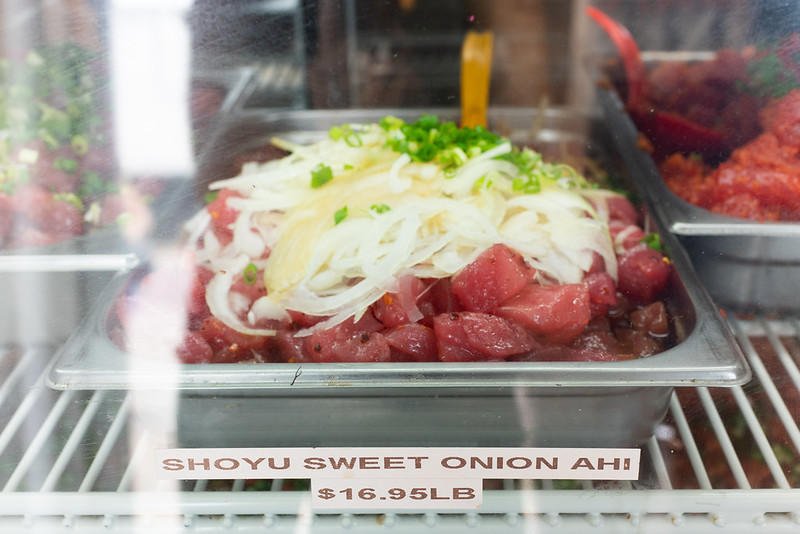 Once you have that down, then you can start making poke. There’s no real cooking involved in making poke. It’s just chopping and assembling good raw ingredients.

Here’s how to make a basic Hawaiian-Style Poke:

Here’s how to make a basic Shoyu Poke:

If you want to get fancy, consider adding these ingredients to either recipe: tobiko/masago, oyster sauce, togarashi, furikake, garlic, ginger, and chili oil. 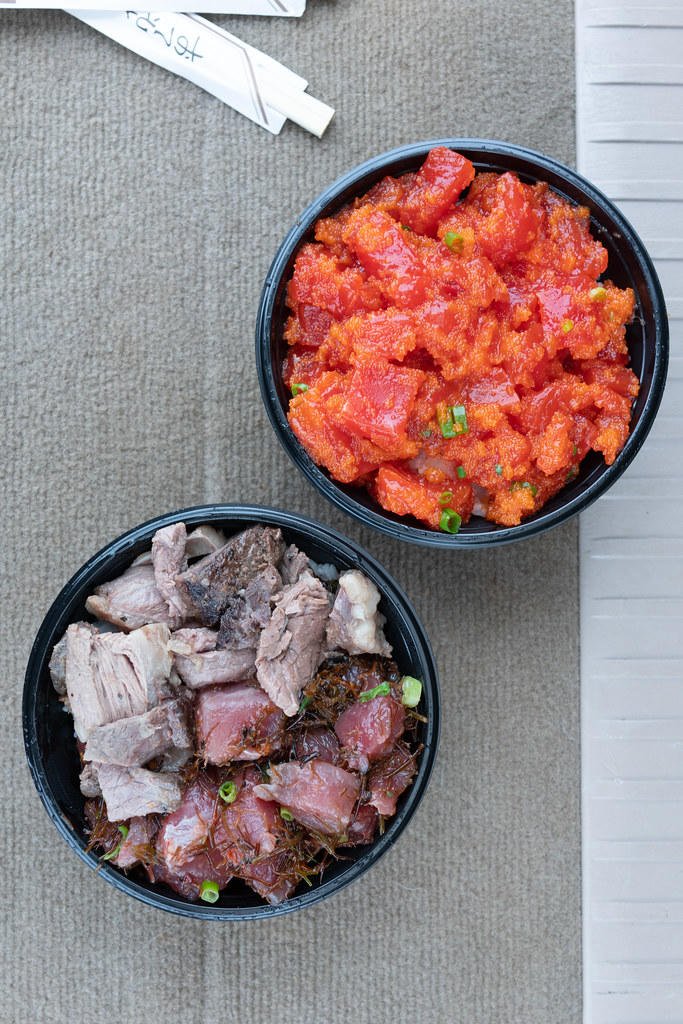 If you want to simplify things, use this poke seasoning packet from Noh. You still need to get fresh ahi, but this small packet has key seasoning ingredients (minus inamona) for Hawaiian-Style Poke. It comes in handy if you don’t make poke often (and don’t want to be stuck with extra Hawaiian sea salt or limu that you won’t use). I went though several of these packets when I first moved to NYC. 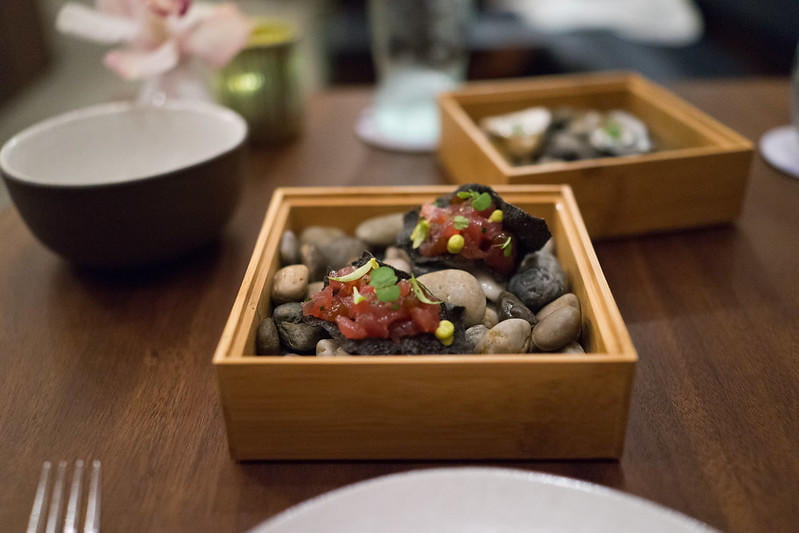 Everyone has their own style and way of making poke. It’s not complicated. Try different proportions and ingredients till you find one you love. It can be your signature poke ^_^ 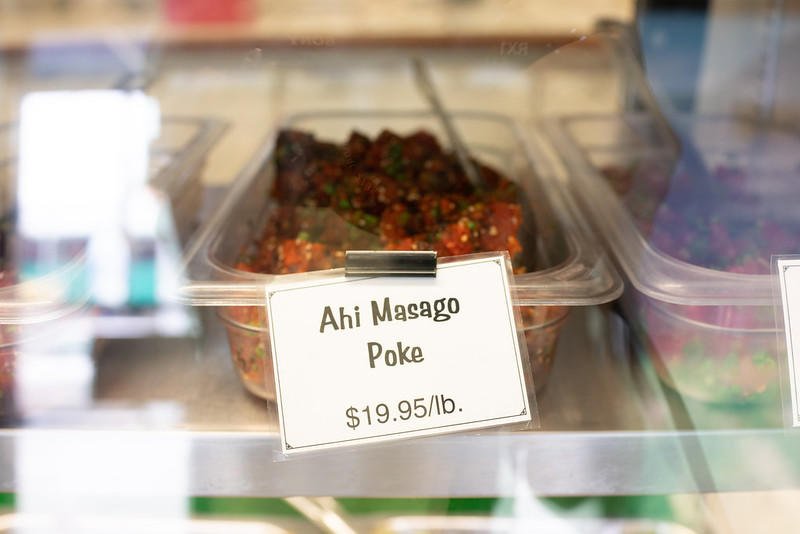 Where To Get Poke In Hawaii

The below list covers the poke spots I frequent often, but you can find poke everywhere (many places!) throughout Hawaii. The breadth and variety is amazing. You’ll find poke at supermarket counters (always look for poke made with fresh ahi instead of previously frozen ahi), dedicated poke shops, and poke at fancy restaurants and hotels.

Poke is a true Hawaii treat so I hope you’ll eat lots while you’re in town. 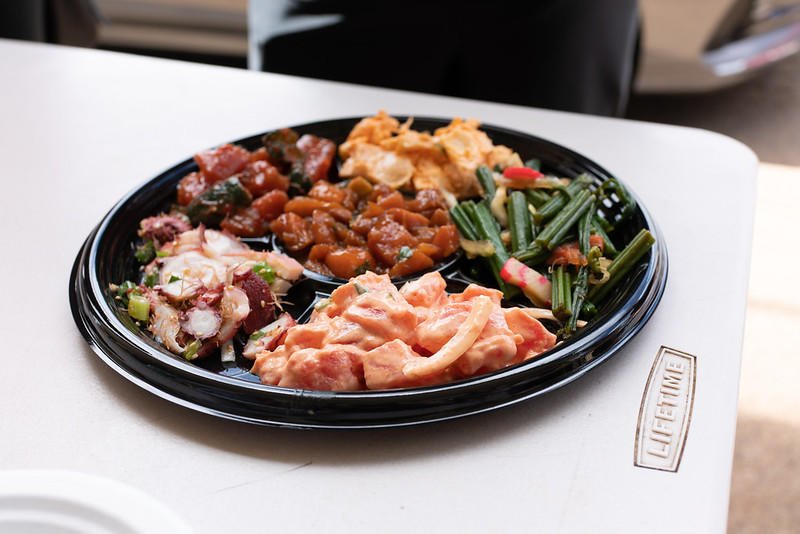 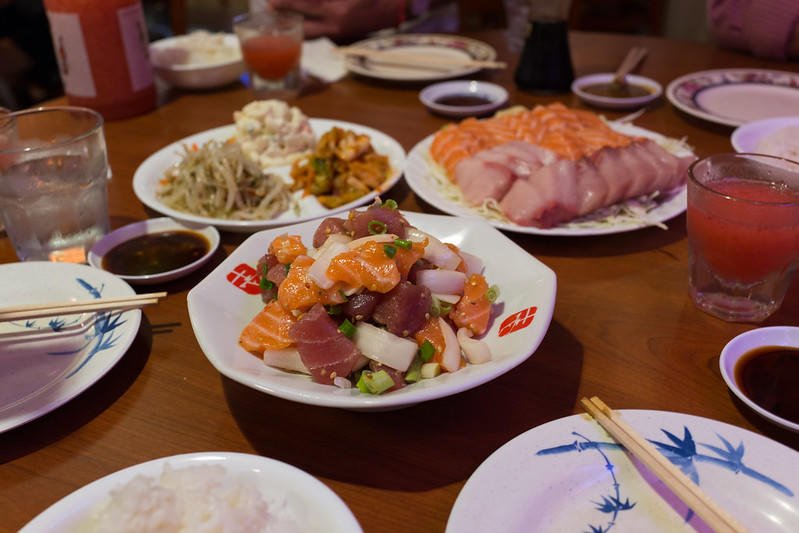