[This post was originally published July 22, 2019. It was updated September 26, 2019 to include a step-by-step photo recipe on how to make Lomi Lomi salmon at home.]

Lomi Lomi Salmon is a Hawaiian side dish (made from salted salmon, tomatoes, onions, and green onions). It’s a must-have for any Hawaiian meal or luau. Here’s everything you need to know about Lomi Lomi Salmon, plus a step-by-step photo recipe! 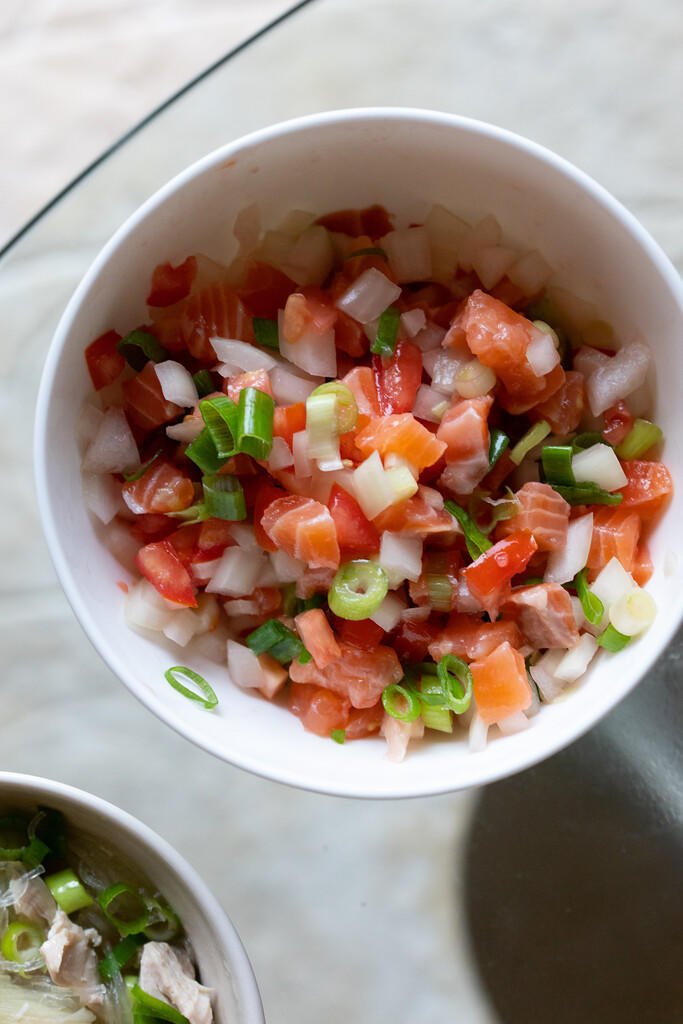 No real Hawaiian lunch/dinner is complete without lomi lomi salmon. 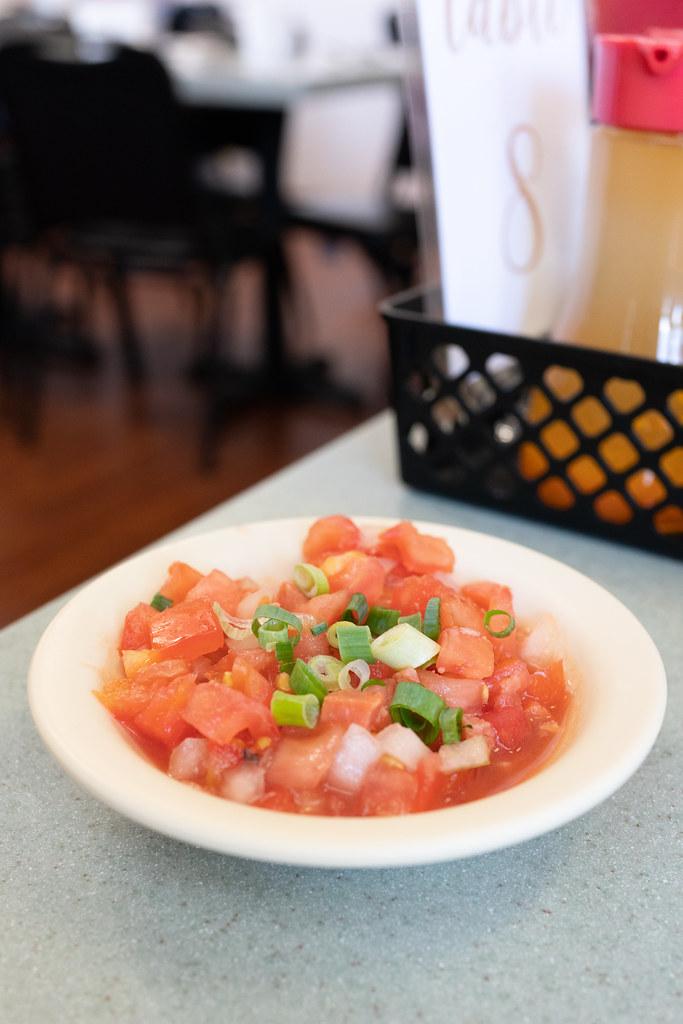 What is Lomi Lomi Salmon?

Lomi lomi salmon is a very popular traditional Hawaiian side dish. It is made from mixing together: salted salmon, tomatoes, onions, and green onions. 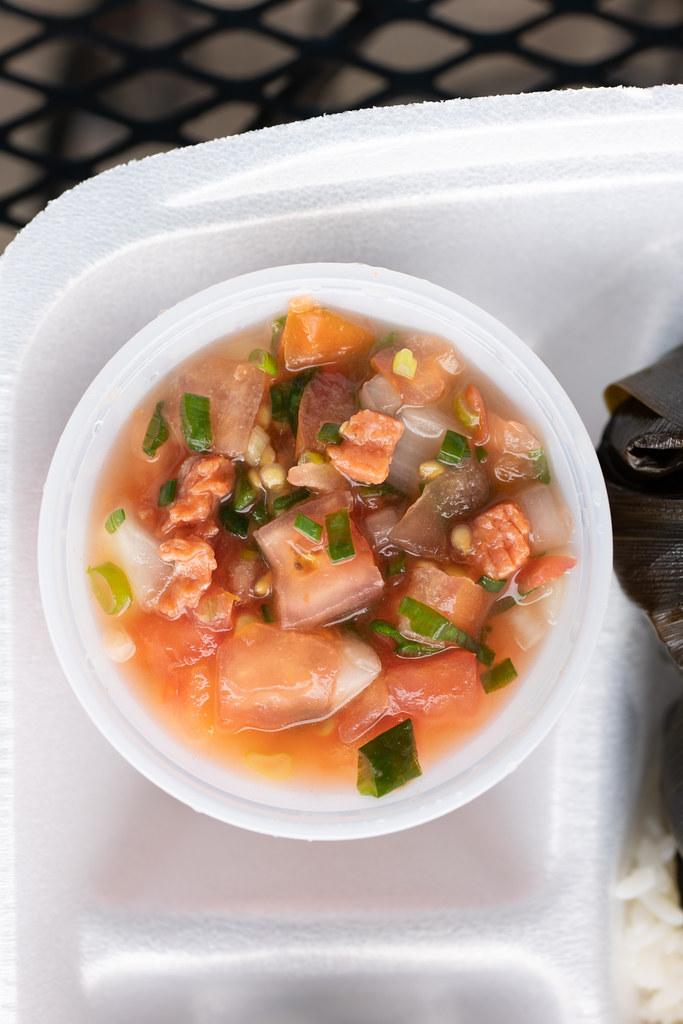 All the individual ingredients are chopped into bite-size pieces, and it’s a dish you can eat with a spoon. Think of it as a refreshing salmon-tomato salad. 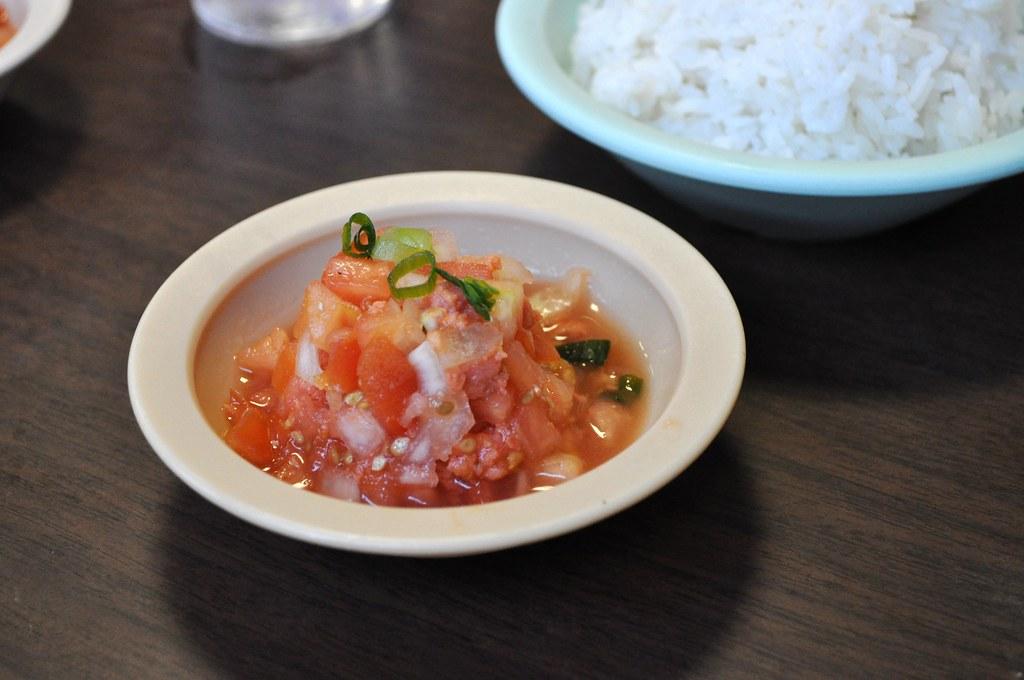 Lomi lomi salmon is always served chilled (the colder the better!), and alongside many other Hawaiian dishes like kalua pig, poke, lau lau. Don’t forget to splash some chili pepper water on top for some heat! 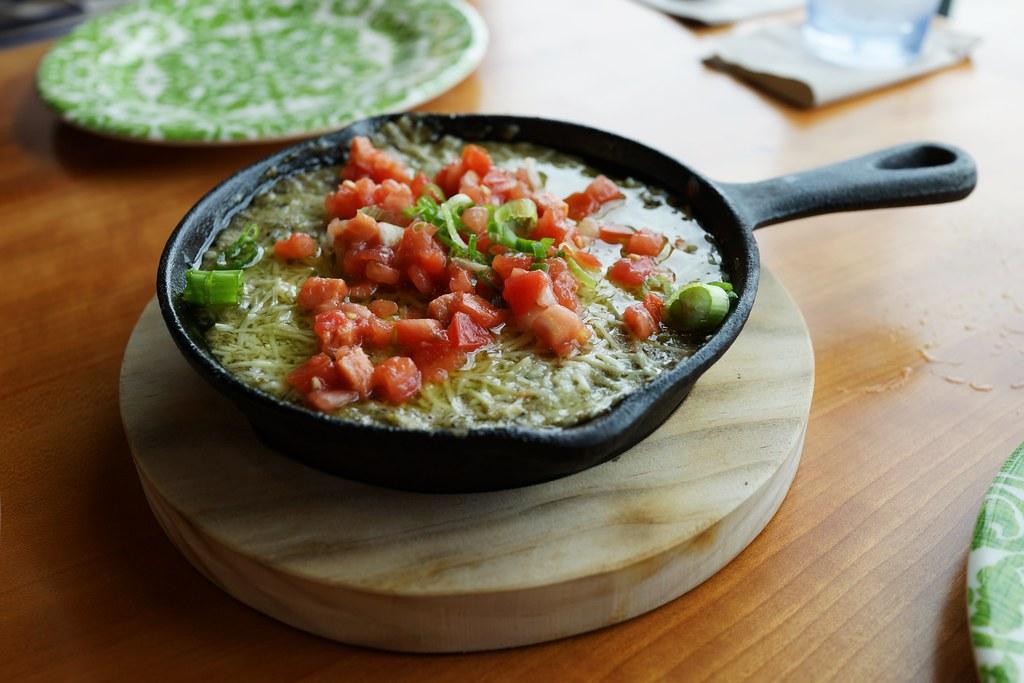 What Kind of Name is Lomi Lomi Salmon?

First we have to understand where the name comes from! Lomi lomi is the Hawaiian word for to knead or massage. Have you heard of deep tissue / lomi lomi massages before? It’s the same word ^_^

So lomi lomi salmon refers to the act of mixing or kneading (very lightly) the salted salmon together with all the other ingredients. 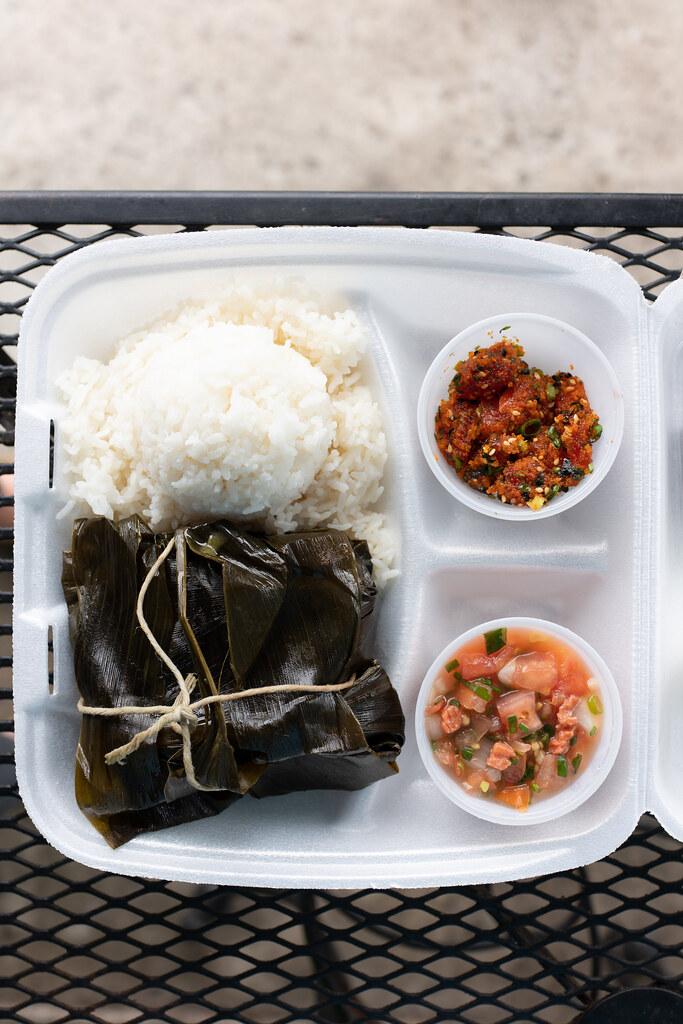 How To Eat Lomi Lomi Salmon

For me, an ideal Hawaii lunch plate would have: rice and poi, kalua pig, pork lau lau, luau stew, chicken long rice, and lomi lomi salmon. And fresh opihi if I’m lucky. A little of all the good stuff. You alternate bites of everything…

…then you make one “combo bite” that has a spoonful of poi plus kalua pig and lomi lomi salmon. All in one bite! That would be a SUPER onolicious bite, heheh. 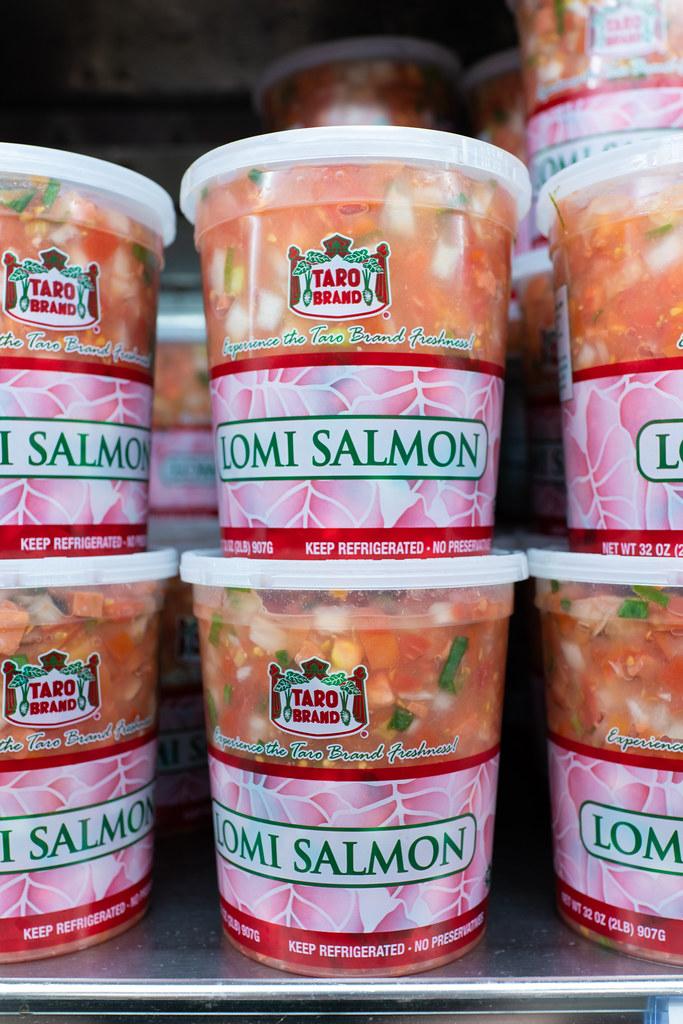 Where to Get Lomi Lomi Salmon

If on the mainland, you’ll can make lomi lomi salmon or find a Hawaiian restaurant (so many Hawaiian and/or Hawaii-inspired restaurants seem to be opening around the world which is very cool).

In Hawaii we are lucky to get lomi lomi salmon at many places! Here are a few I love: 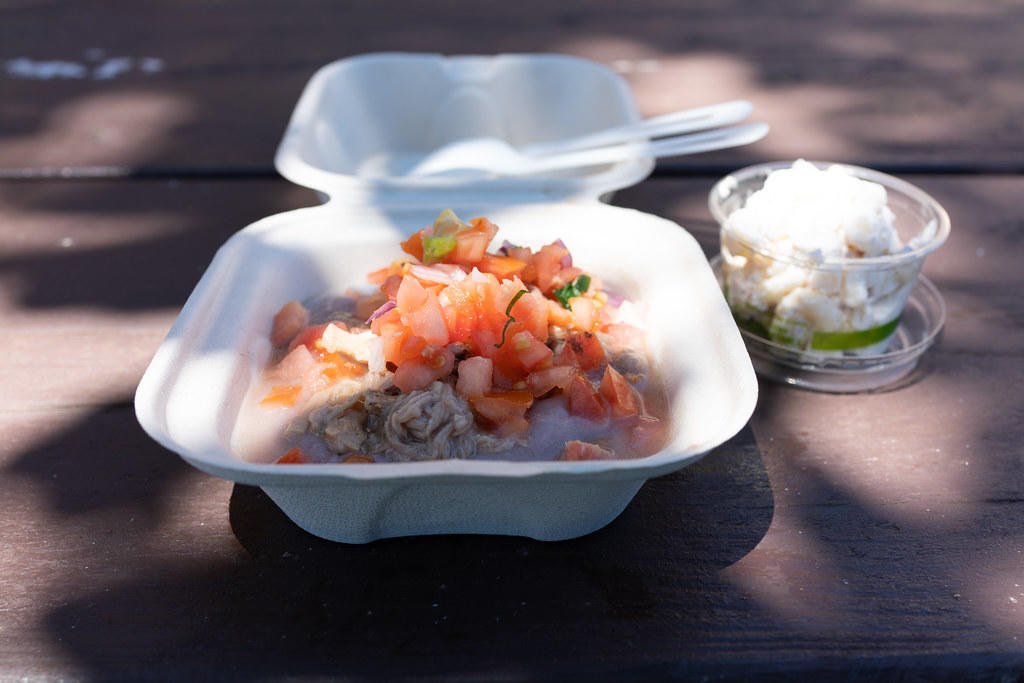 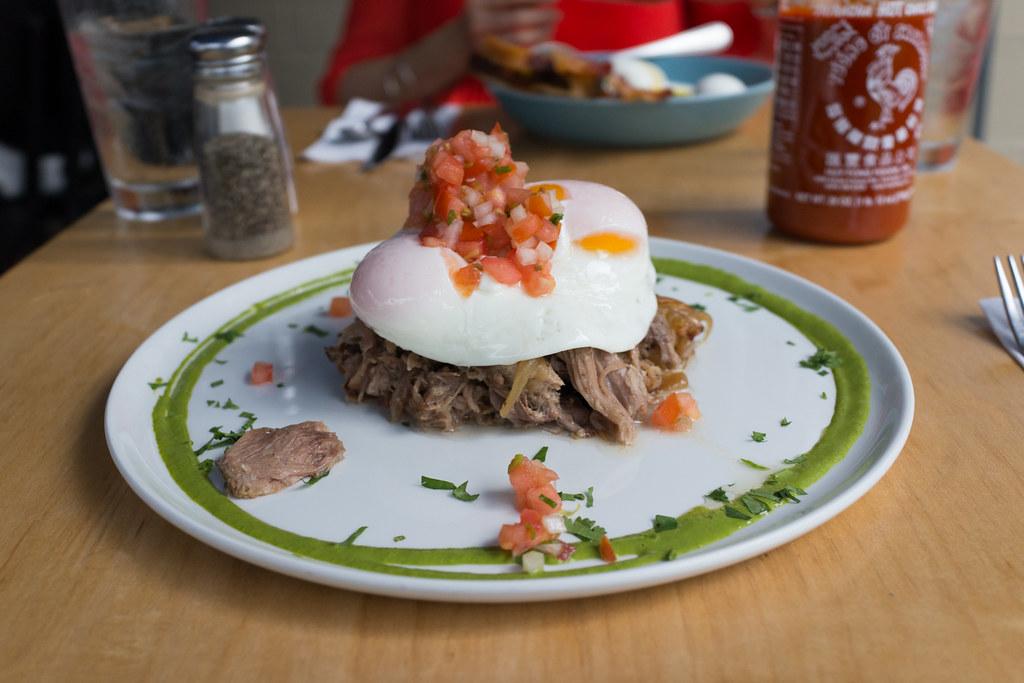 Restaurants LOVE to fancy up all the good local and Hawaiian dishes. Evidence: saimin, kalua pig, haupia, loco moco. And why not, as long as it is still tasty.

Highway Inn in Kaka’ako makes a lomi lomi salmon dip (fourth photo from top). It’s made from shredded pork lau lau mixed with cheese and mayo. It’s then baked till bubbly hot, and top it with lomi lomi salmon. Served with chips.

Over Easy (a great breakfast spot in Kailua), serves lomi lomi tomato (which is basically lomi lomi salmon minus the salmon) on top of a kalua pig hash with eggs!

Even if you aren’t in Hawaii to try these dishes, you can try make a version them at home. It neat to see the different possible uses for lomi lomi salmon. Good inspiration!

How to Make Lomi Lomi Salmon 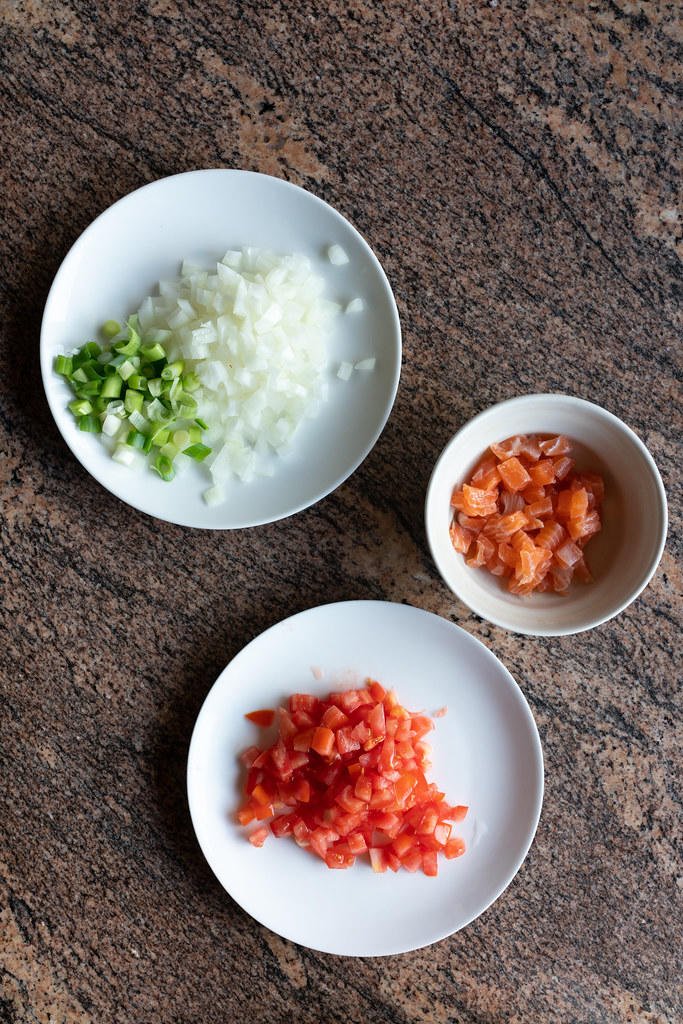 You can add more/less of any ingredient if your prefer. My dad loves tomatoes so he uses more tomatoes. I love salted salmon, so I often increase the amount of salmon. Feel free to change up the ratios till you find the one you like best. 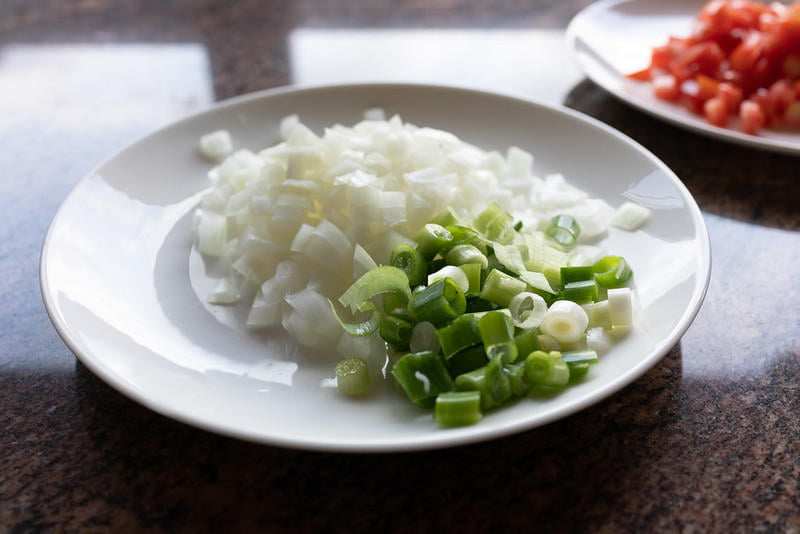 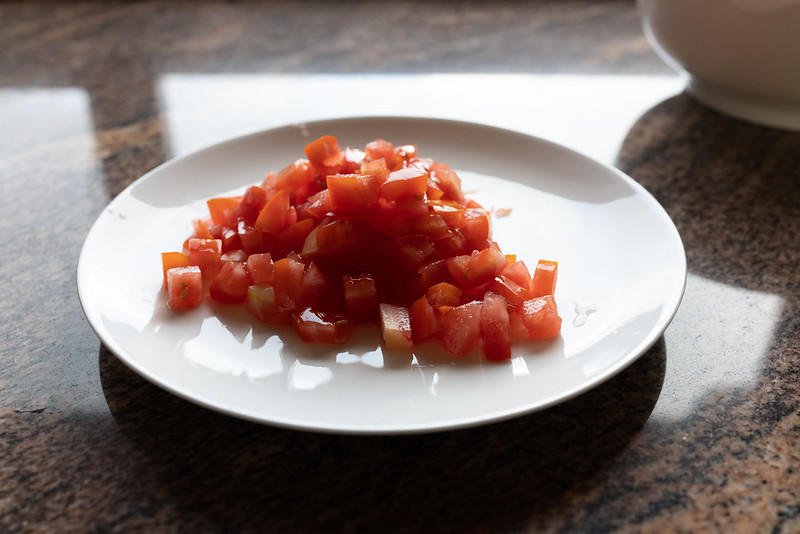 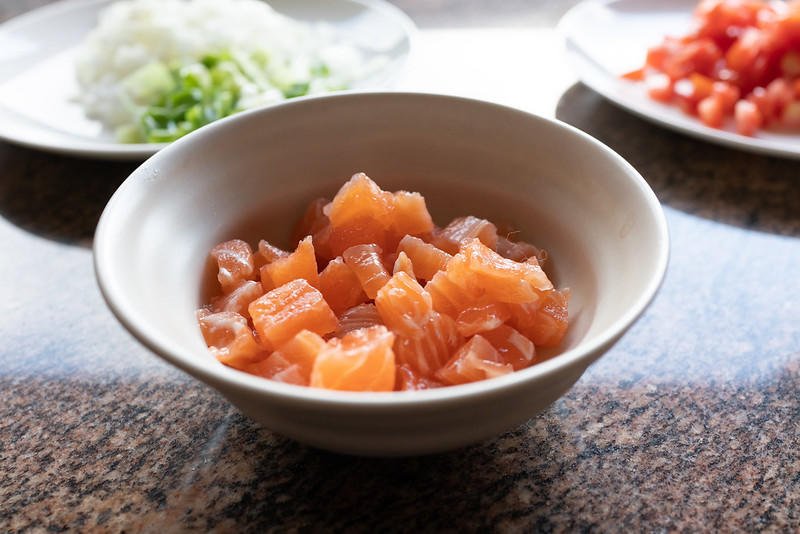 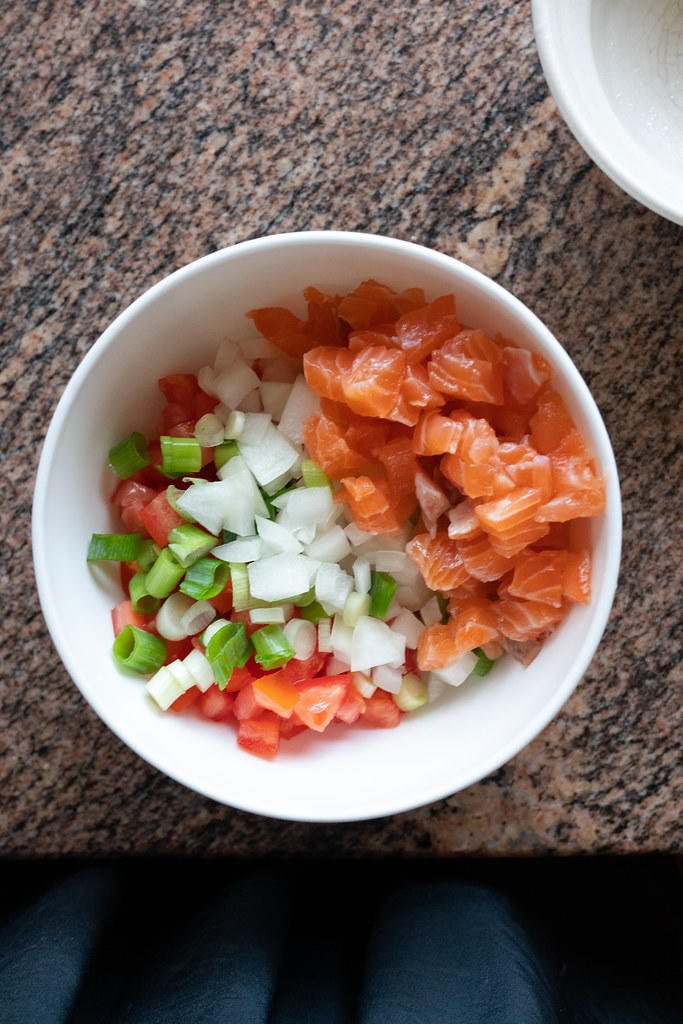 Put all the diced ingredients together in a big bowl. 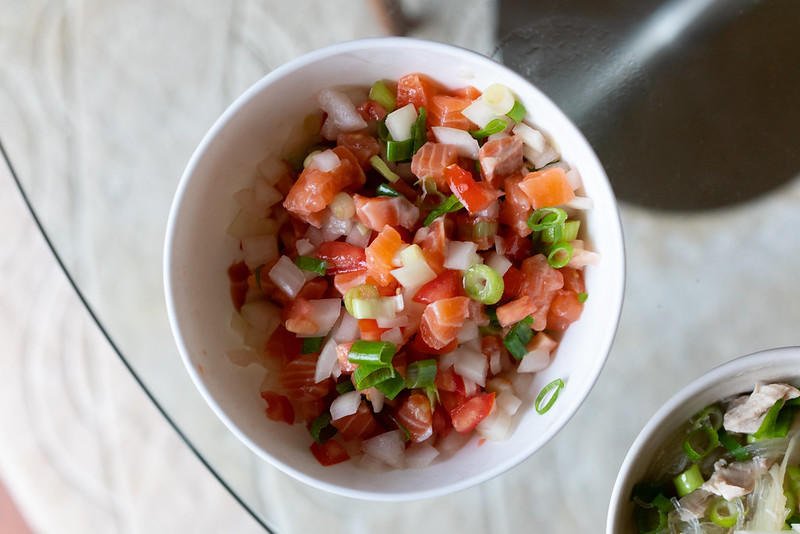 Then lomi (aka gently knead) the ingredients together until well mixed. Keep in the fridge for an hour or so to marinate/let the flavors combine. You want to eat lomi lomi salmon cold. There is no need to salt or season the dish because the salmon is already salted. Eat and enjoy! 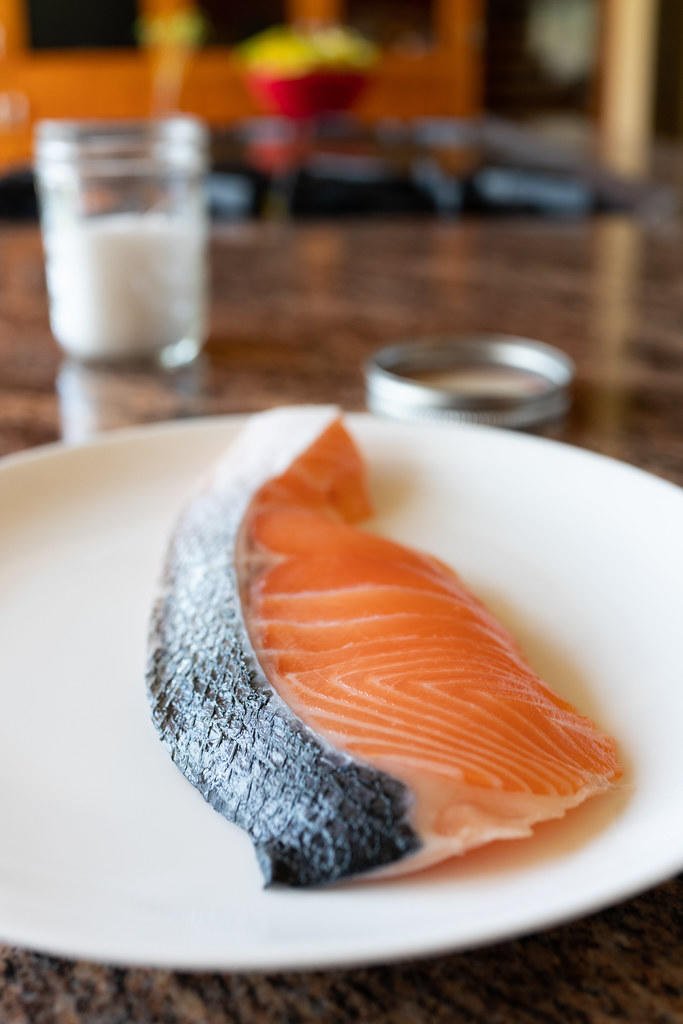 Where To Buy Salted Salmon 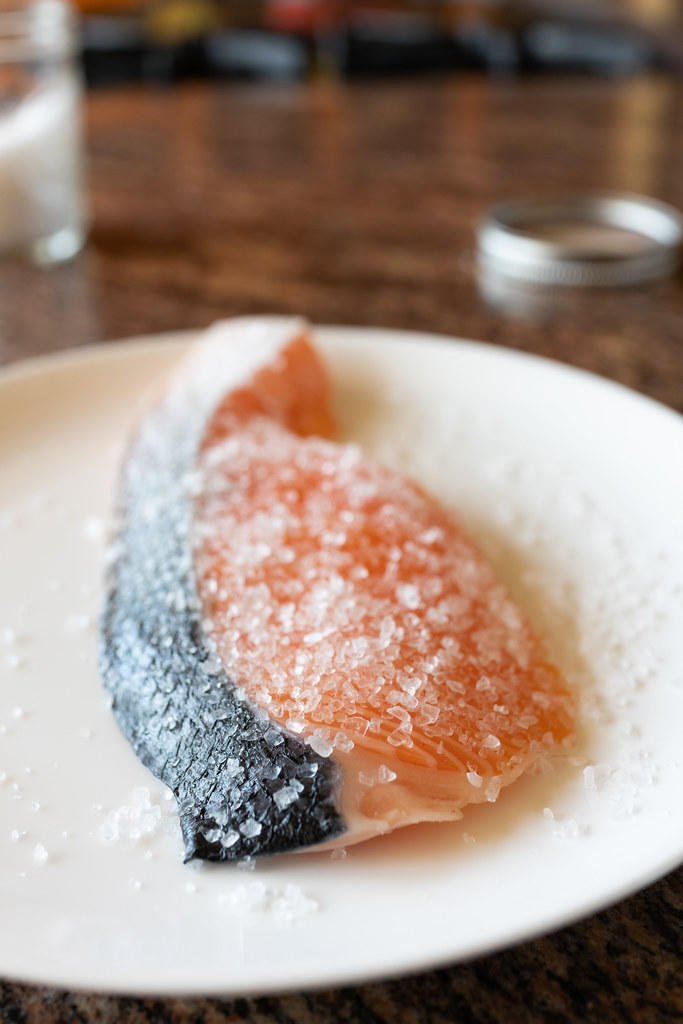 How To Make Salted Salmon

If none of those options are possible, you can make salted salmon! It is easy. Here’s how:

Hooray, you made it to the bottom of this post! See above for up for step by step photos of how to make this recipe. See below for the official Lomi Lomi Salmon recipe ^_^

In Hawaiian, lomi lomi means to knead or massage. Lomi lomi salmon is salted salmon that is gently kneaded aka mixed together with other ingredients (tomatoes, onions, and green onions).

Regarding the onions: if you can find sweet Maui onions, definitely use that (I know it's hard to find outside of Hawaii).

If you can't find salted salmon, make your own:

What kind of salmon can I use there are different types out here in WA? Like Atlantic salmon, Sockeye etc…

@Kanoe, Anykine is best....I personally would steer far away from "farm raised". Traditionally salmon was shipped in on sailing vessels in kegs which necessitated it had to be preserved in salt (salmon is not a tropical fish). Prior to this the Hawaiians made lomi lomi fish of various sorts where they preserved the fish with salt. The salmon was already salted so was easier to prepare.

The salting was a preservation technique and other mainland fish were also shipped in. Another famous salted mainland fish is Butterfish which is Black Cod from the pacific northwest. Today you can get a pound of refrigerated Black Cod for a couple of bucks a pound......add 25 cents worth of Hawaiian salt and the resulting product currently sells in excess of $16.00 per pound locally . Lucky we live Hawaii...eh!

I can only get Smoked Salmon, could I use that?I'm from Hawaii and I miss the Hawaiian food.

Hi Peggy! Smoked salmon isn't a perfect substitute, but it will work in a pinch! And hopefully satisfy that Hawaiian food craving :) Hope you enjoy! - Kathy