Kulolo is a super good Hawaiian dessert made from taro, coconut, and sugar. It has a texture like pudding crossed with fudge. Eat it at room temperature (or warm, with ice cream!) You can find kulolo all over Hawaii, but it is most famous in Kauai. 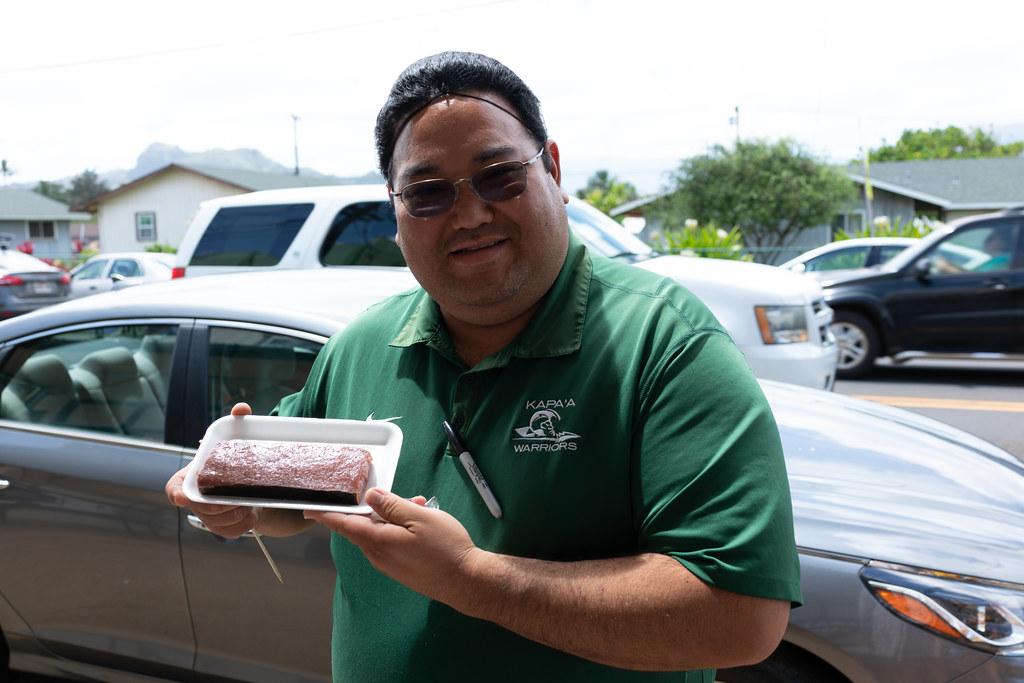 I'm going to go with the latter because... 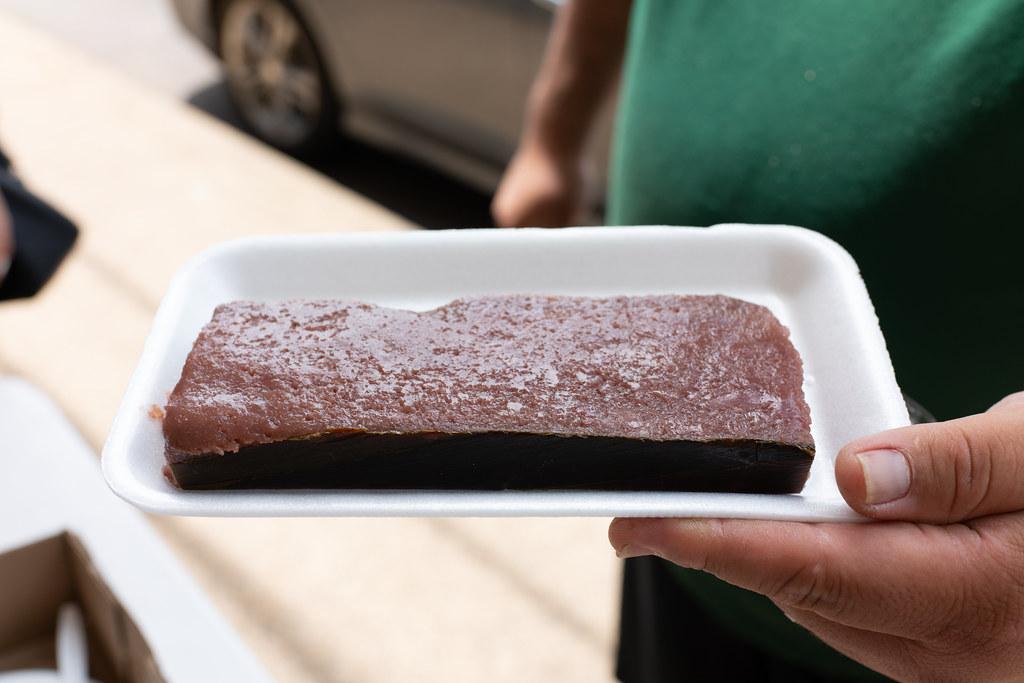 1) It's no fun to read about a Hawaii food item/dish without understanding what it is. Hawaii is part of the US (I've been asked this question so many times), but sometimes it feels like another country.

2) Most of you know that I've had another blog for a long time (15 years). That blog started as a Hawaii blog, but then took many turns (more here). I'm keeping Onolicious Hawaii-focused, and I hope it will be a resource for Hawaii food and travel. I want the blog to be useful whether you're a local or visiting Hawaii for the first time. 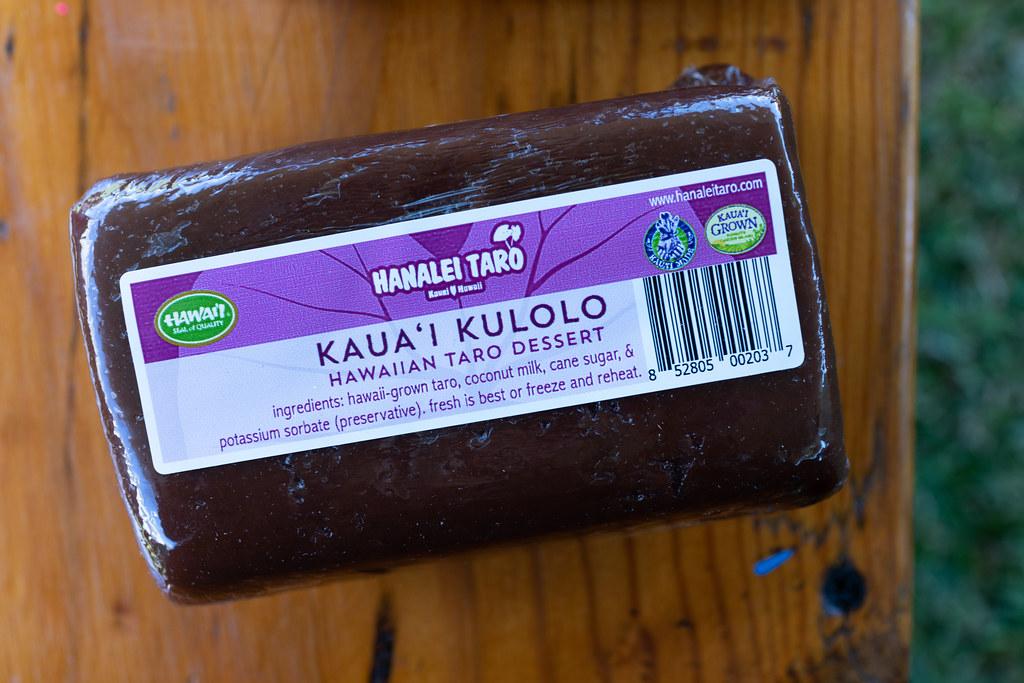 Kulolo a traditional Hawaiian dessert made of two main ingredients: taro and coconut. 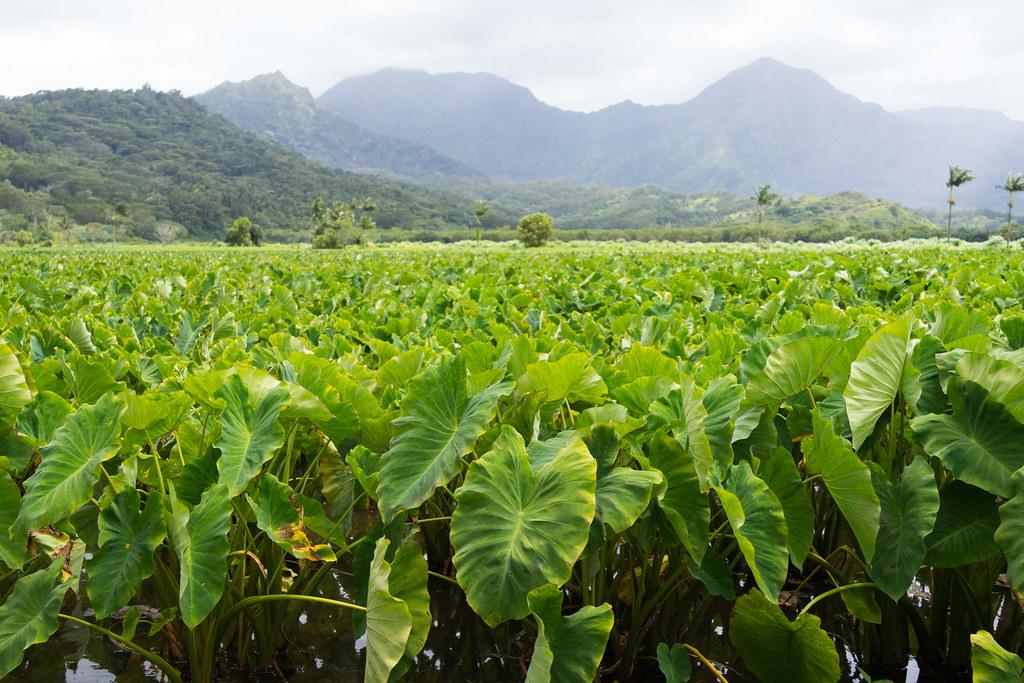 We grow beautiful taro in Hawaii and use it in a lot of cooking. 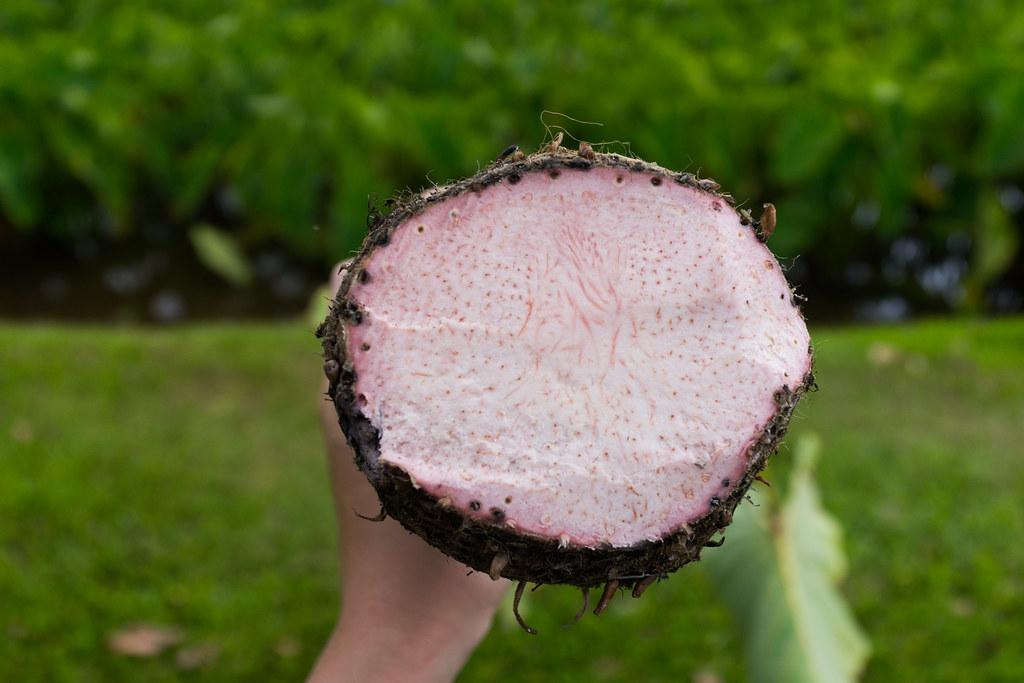 For kulolo, the raw taro is grated and mixed with fresh coconut milk (and sometimes also coconut meat), and sugar. It's pressed into a tray (lined with ti leaves), and steamed for several hours. Once set, it has the texture of pudding crossed with fudge, some say it's mochi-esque. Kulolo is rich and sweet, and a small slice goes a long way. You eat it with your fingers. 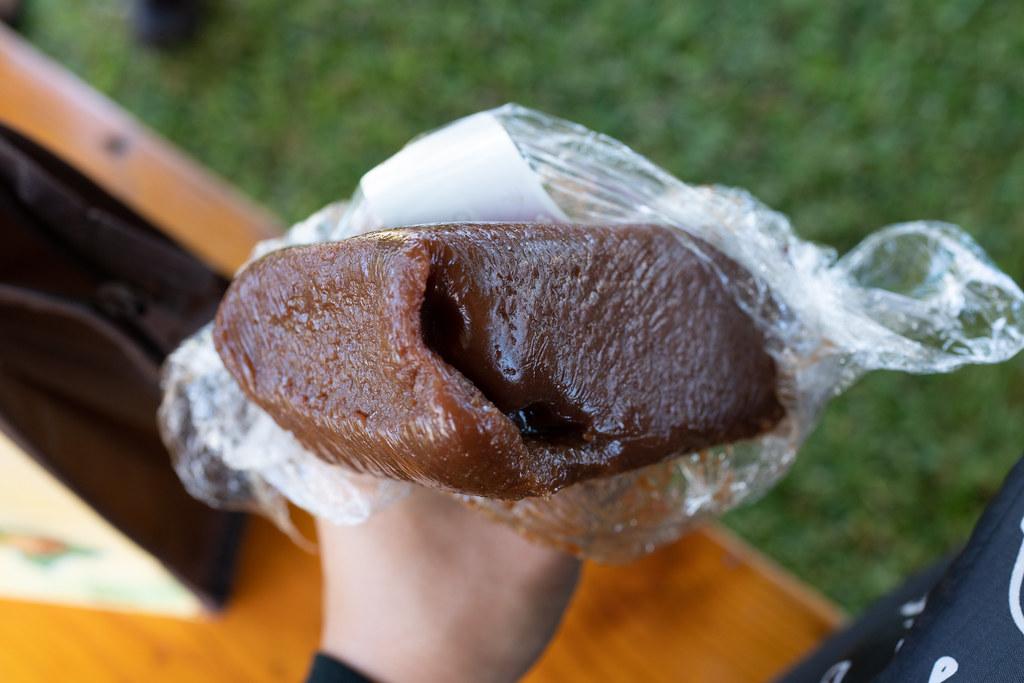 You can make kulolo at home but it is labor intensive and time consuming. I prefer to purchase it from someone who specializes in kulolo. Kulolo is typically sold in one pound bricks, and the best kulolo comes from the island of Kauai. Why Kauai? That's because Kauai grows all the good taro, and you need the best taro to make the best kulolo! 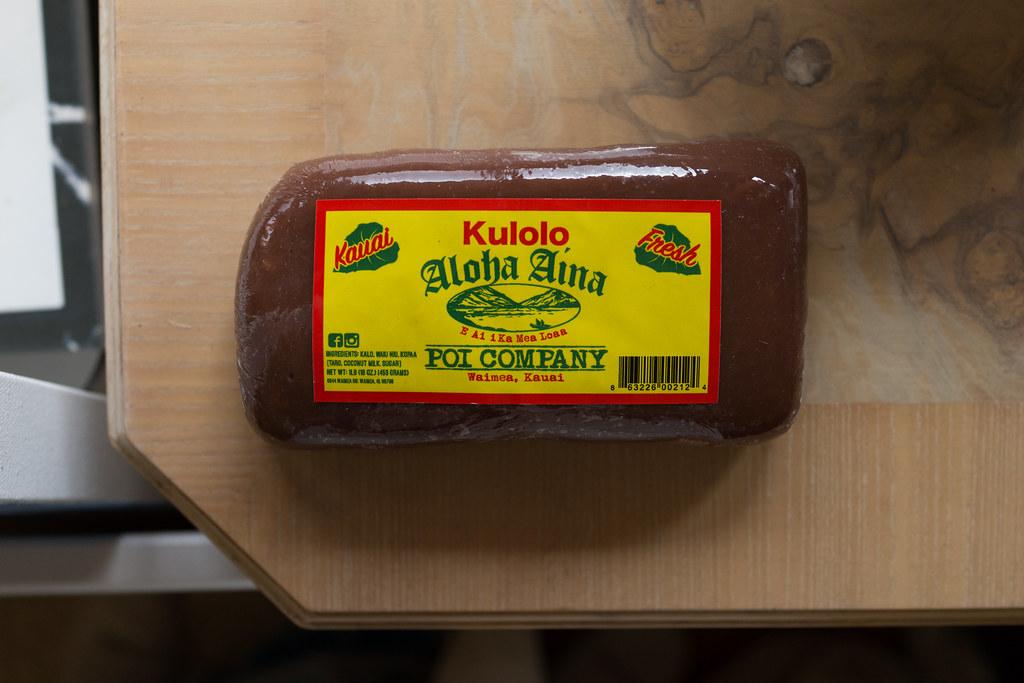 Funny tidbit, my grandma tried kulolo for the first time last month (even though she's been living in Hawaii since the 1970s). I asked her how she liked it. She said, "it's like Chinese nian gau, but Hawaiian-style. Hawaiian gau! I love it."

That made me so happy. She's right, it is a lot like Chinese gau. It has that same thick, fudge-pudding texture and rich flavor. You know what we do with leftover gau? We stick it in the fridge overnight to let it get hard. Then slice into ½-inch thick pieces (like when slicing Spam haha). Then pan-fry slowly over medium-high heat. A few minutes on one side, then flip and a few minutes on the other side. The outside gets dark golden and crisp, and the inside turns all molten and warm. It is HEAVENLY. 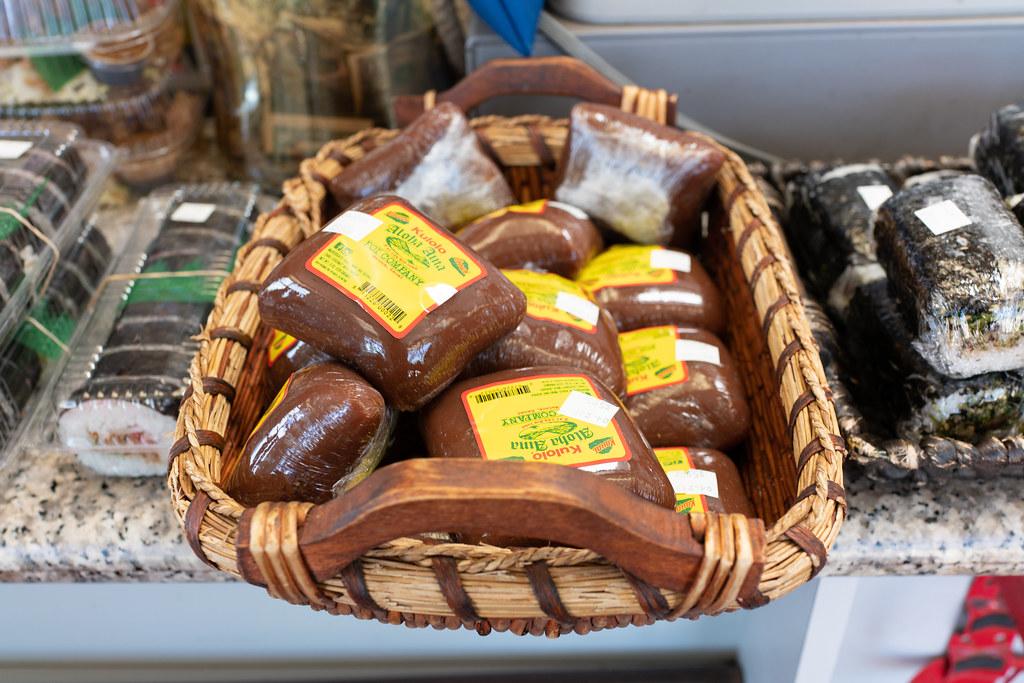 Where do you get Kulolo?

All over! There are four main companies that make kulolo. Three are based in Kauai and one in Oahu. These brands wholesale to retail stores so you can find them in many places throughout Hawaii. This includes supermarkets, local mini marts, farmer's markets, fish/poke markets, etc. Below are brands/places to look out for.

PLACES (they don't make it in house, but stock kulolo from different brands). I've listed the main places, but lots of small mom and pop plate lunch/poke/fish stores also carry kulolo. Keep your eyes out and you'll be rewarded.

How do you store Kulolo?

Keep kulolo wrapped tight, and at room temperature. Fresh kulolo is good for 3-4 days. If you have a leftovers, put the kulolo in the fridge to firm up, then slice and pan fry like we do with Chinese nian gau!

How do you eat Kulolo? 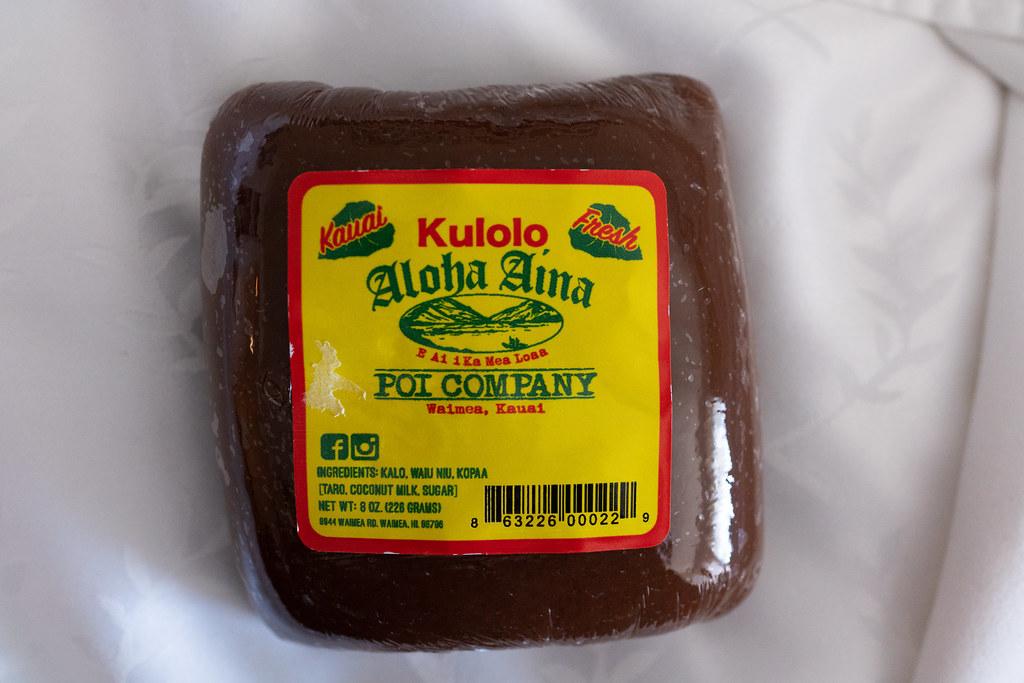 ...(sometimes you can find smaller half-pound sizes), wrapped in plastic. You just unwrap, slice off a piece and eat it. Super simple, makes great picnic food. 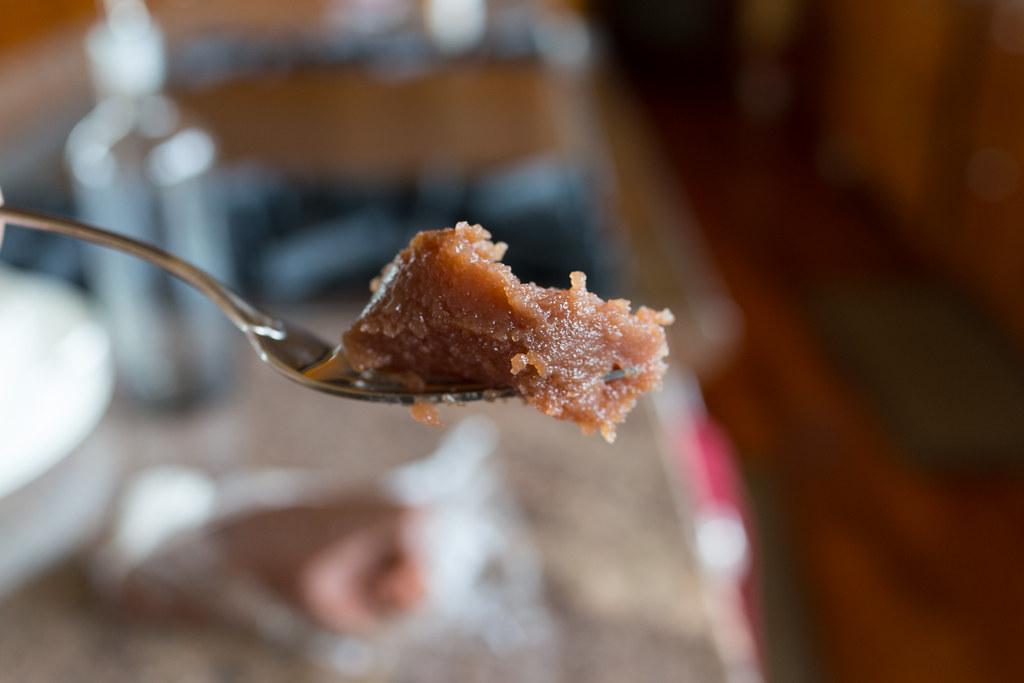 Some people like one thick piece to hold and nibble. I like to have lots of thin pieces. I like to put it on my tongue and let it melt a bit...oh so good. A one-pound serving goes a long way, but leave kulolo at your desk and you'll be surprised by how quickly you finish it! Just one more slice... 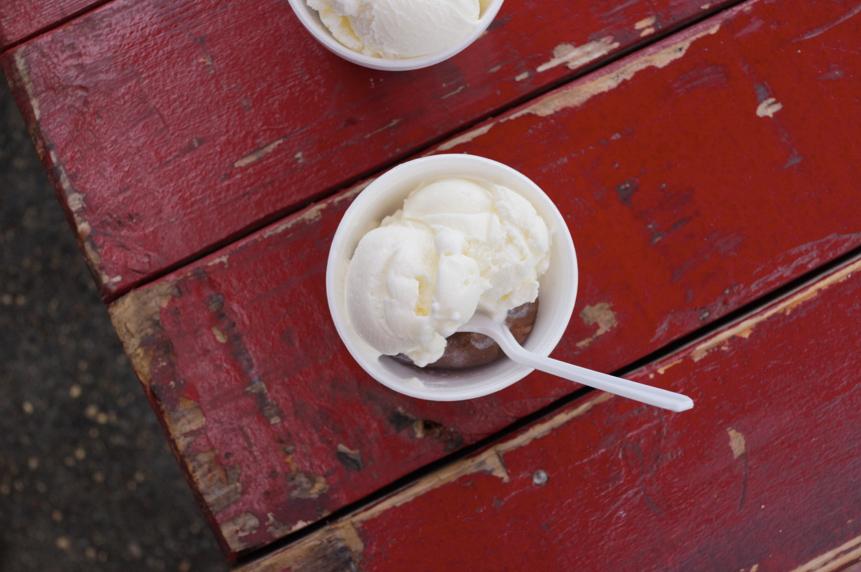 There's a great Hawaiian food place called Waiahole Poi Factory in Kaneohe. Their signature dessert is called Lady of Waiahole - it's a cup filled with haupia ice cream and warm (almost liquified!) kulolo. Hot kulolo, cold ice cream. Super luscious. I think they microwave or steam the kulolo to get it that way. 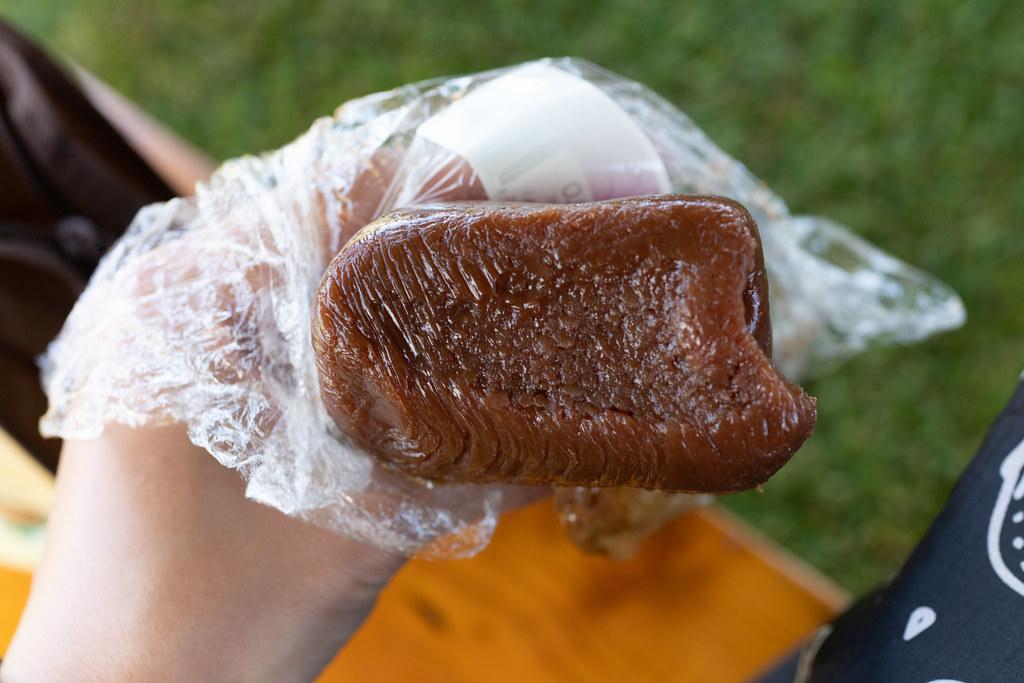 Either way. Do not miss! Make sure you try kulolo at least once.

I would NEVER have known about kulolo if not for your post, and it ended up being my absolute favorite treat this trip (even more than strawberry mochi, or coco puffs, or even furikake Chex mix!!). I picked up a tiny block at Yama's and kicked myself for not buying like, four more. 😂 I didn't expect the caramelized coconut flavor, and I just couldn't get enough.

Amazing to hear!! Yes! That caramelized flavor is what makes it special. Kulolo is one of those sleeper favorites...it's so good that locals keep this one for themselves hahaha. You hear about all the other local/Hawaiian desserts in national press, but kulolo is for the locals ^_^