McDonald’s Hawaii offers a special menu of items you can only find in Hawaii. There are breakfast platters loaded with Spam and Portuguese sausage, a dessert menu with hot haupia (coconut pudding) and taro pies, fried apple pies (only state where you can get the pies fried in the US!), and much more. Below are our favorites, ranked. 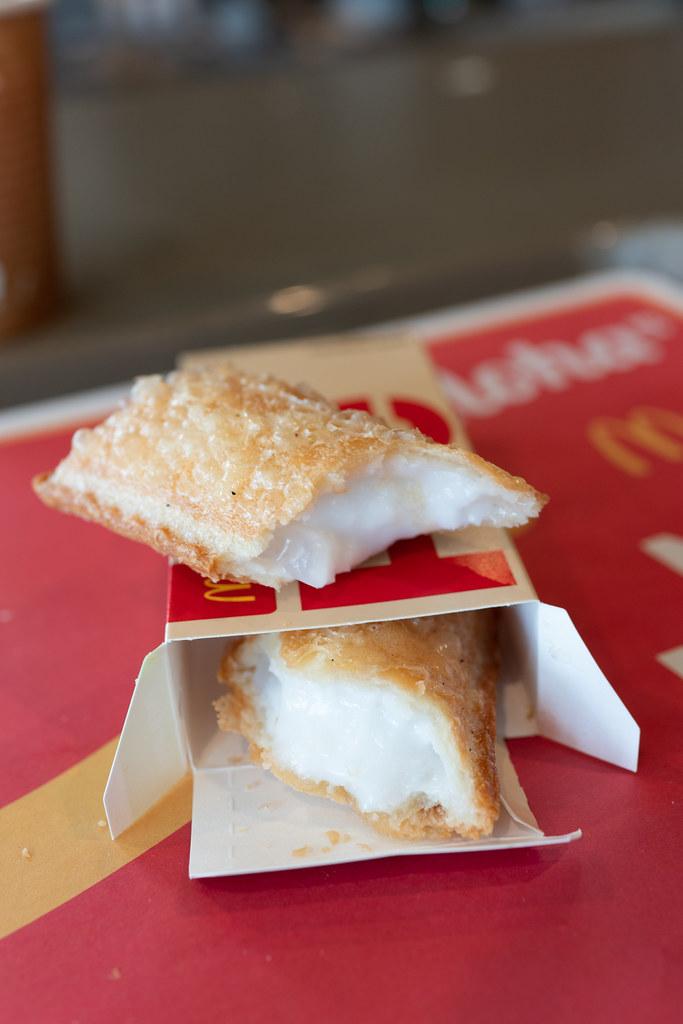 The only time I eat fast food is in Hawaii. Fast food places here are clean, service is friendly…and the Hawaii-only menu items are a treat. There are breakfast platters loaded with Spam and Portuguese sausage. The dessert menu offers haupia (coconut pudding) and taro pies. Bonus: did you know Hawaii is the only state where you can get McDonald’s fried apple pies (not baked!) in the US?

Haupia (sometimes called “coconut pudding”) is a traditional Hawaiian coconut dessert that has a consistency halfway between pudding and jelly. At Mcdonald’s Hawaii, they stuff haupia into the pie crust and deep fry the whole thing. It’s really good, the haupia is all hot and molten, and that fried pie crust is familiar in all the right ways.

They also make Fried Taro Pies! But you’ll never find both Fried Haupia Pies and Fried Taro Pies on the menu at the same time. It’s always one or the other, and they keep rotating them back and forth…. 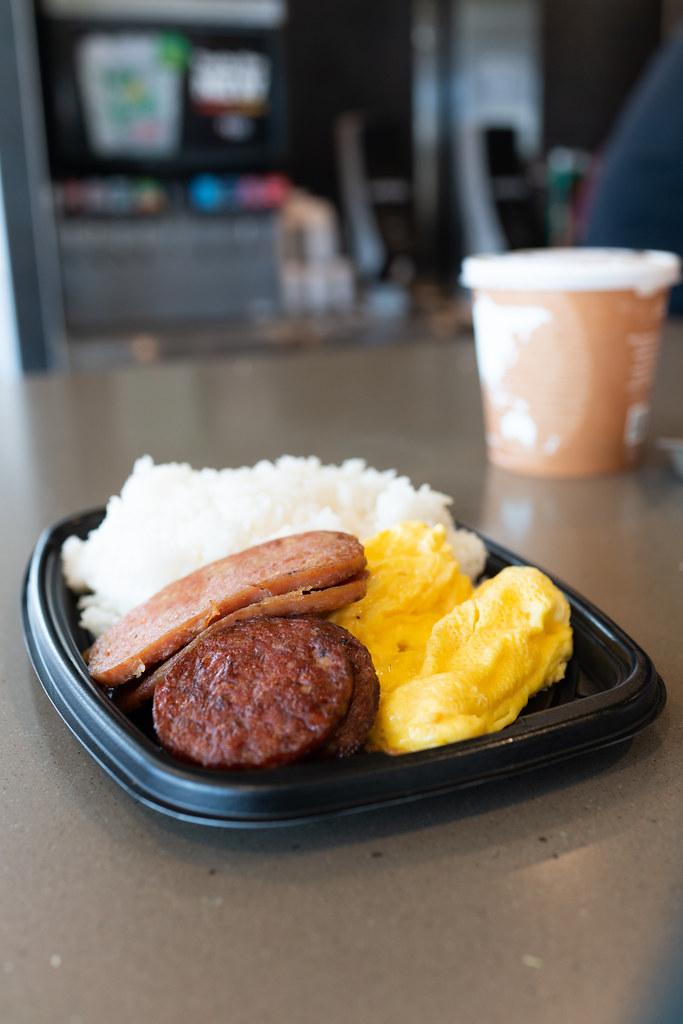 My favorite savory thing to get at McDonald’s Hawaii are the breakfast platters!! You can mix and match, pick only Spam or only Portuguese Sausage. Or you can have it all…which is what I prefer. This is my go-to combo breakfast platter. Lots of rice (most essential part!), scrambled eggs, two slices of Spam (which are pan-fried), and three slices of Portuguese Sausage (also pan-fried). 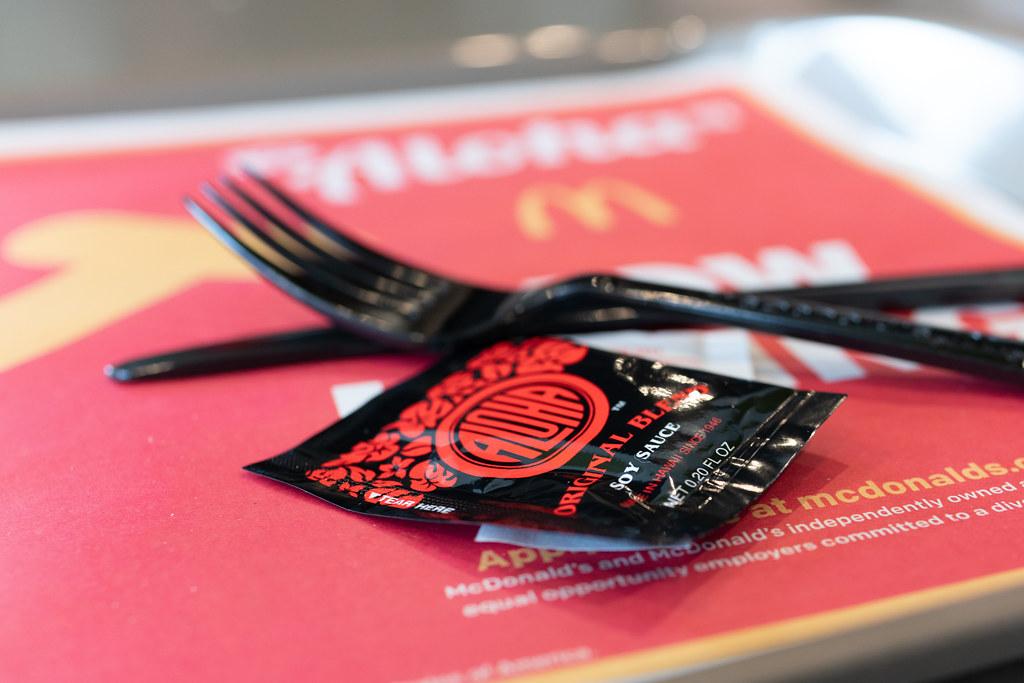 And don’t neglect the Aloha brand shoyu (soy sauce) packets that come with the breakfast platter. You know how some people like to put ketchup on their eggs? In Hawaii we put shoyu. Just open the packet and drizzle it on top of your eggs and rice. The best is when you can get everything (a bit of rice, egg, spam/sausage) in one bite. FYI, breakfast is now served all day. 🙂 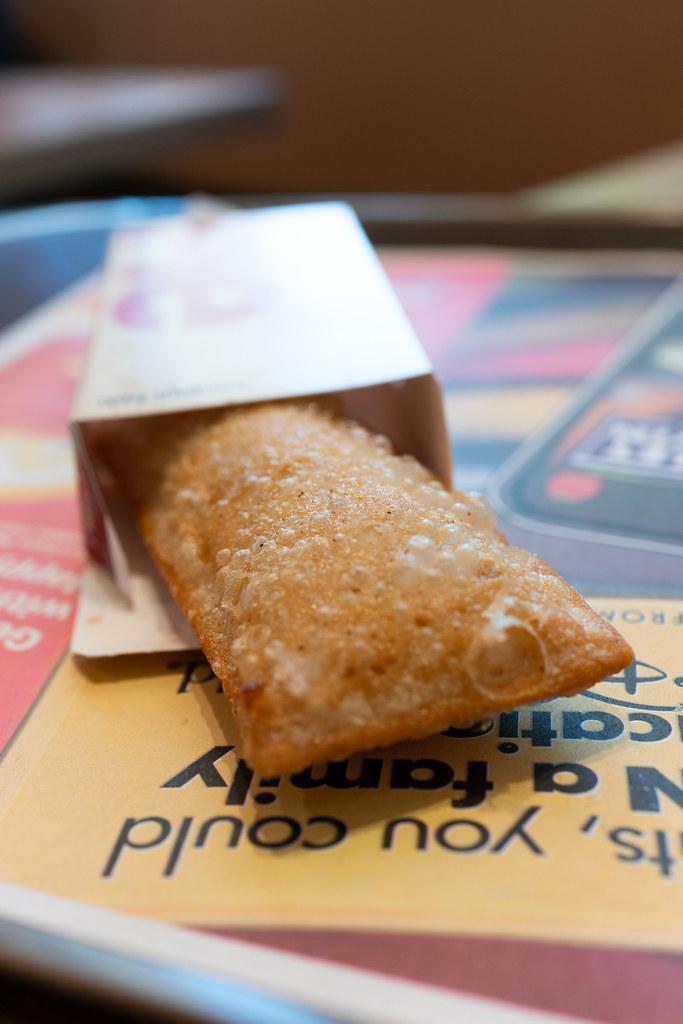 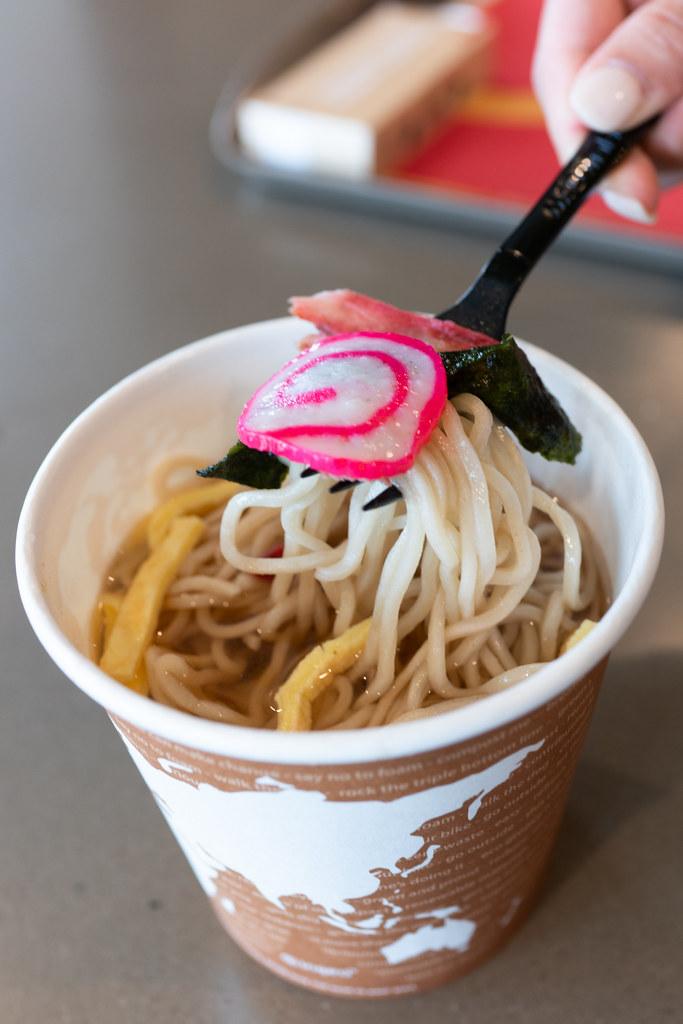 Saimin is Hawaii’s answer to ramen. I enjoy saimin more than ramen because it’s lighter (and won’t make you feel all tired and heavy after) but just as flavorful. Ramen soup is made out of a dashi-based broth, and the noodles are wheat noodles. There are many places to eat saimin in Hawaii (you can even find saimin at 7-11, but my go-to is Zippy’s), and McDonald’s offers a solid version that will do in a pinch. 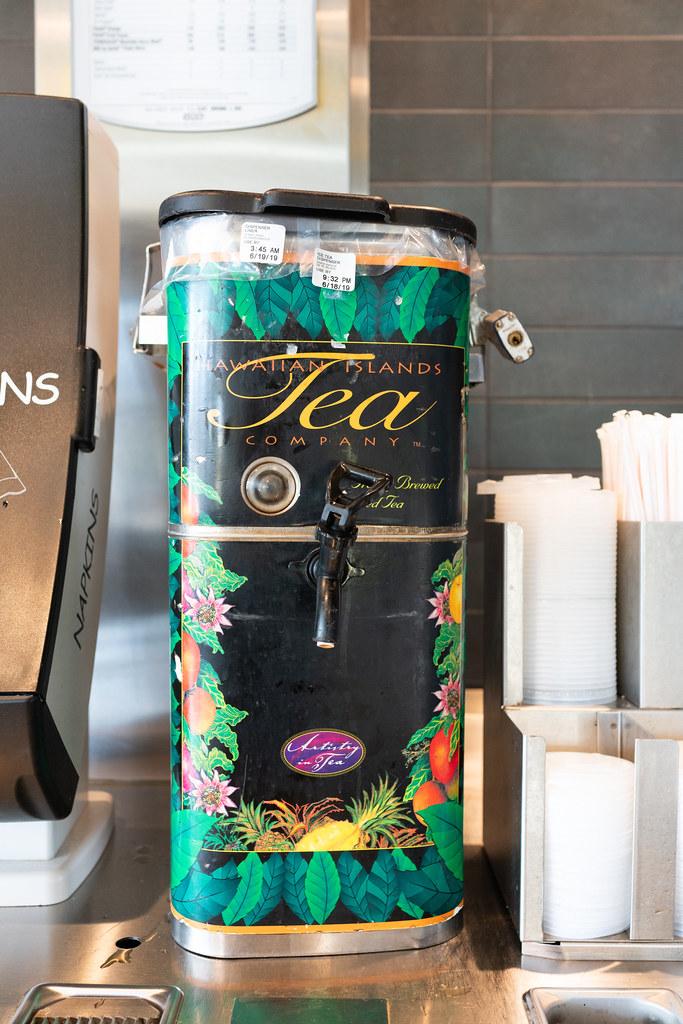 Of course we didn’t forget about the drinks. Only in Hawaii can you try McDonald’s Kona coffee and Hawaiian Islands Passion Fruit Na Pali iced tea. Some McDonalds Hawaii locations also offer Fruit Punch…if you see it, make sure to try it. 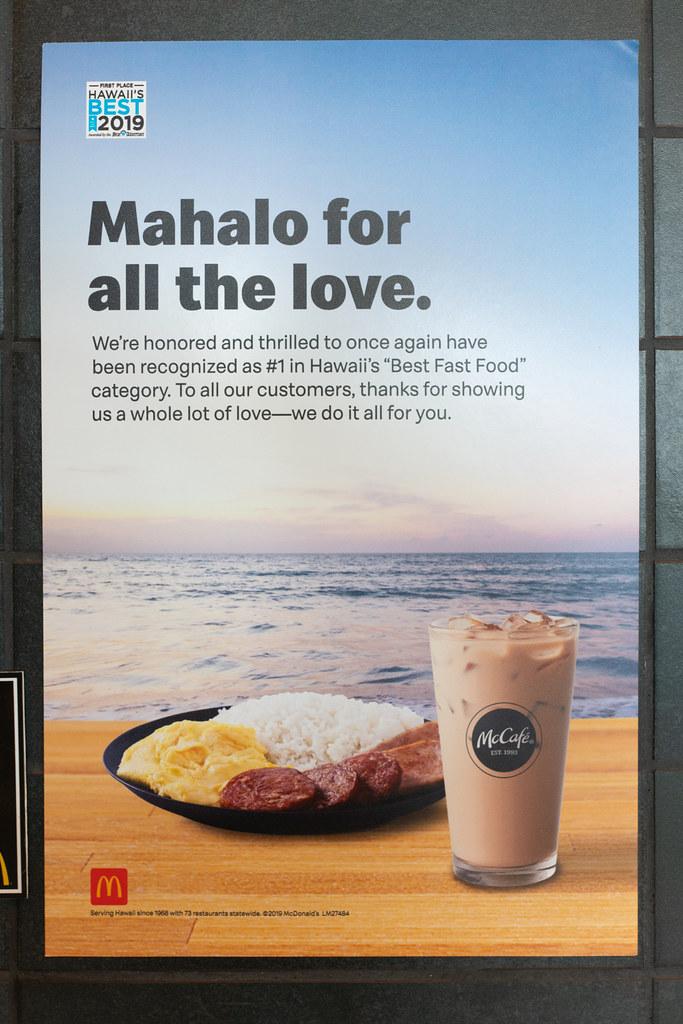 McD's used to serve ChiliGhetti...do they still do? I've been making my own ever since we lived there 40+ years ago.

I would love to see the mainland states (Continental USA) have a summer menu of the basic platter and add on a morning tropical frozen yogurt smoothie option. Coffee can be an option. Tired of seeing people choose only a soda or fizzy drink, as we know that milk or juice is a better option. Even water is a better option. Not complaining, I just think the rest of us here in the states (including Alaska) would love to have a simple platter like this. The summer menus are nice and all on the mainlands (Continental USA), but for those whom can't travel to Hawaii and don't want to make breakfast, I think it would be nice to have a Hawaiian menu. Maybe the following year we could have an add on of New Zealand and Australian breakfast menu.

The last statement should have read: "Maybe the following year, we could add on a New Zealand and Australian most popular breakfast menu items."

Aloha from da mainland,I was born & raised in Hawai’i and let me tell you there is no McDonalds like Hawai’i McDonalds, I remember the 1st time I went to Mc’s (this was in the 80’s) I was ordering breakfast and the girl kept asking me am I ready,am I ready and I asked I don’t see where your potogee sausage w/rice is,of course she had no idea what I was talking about and I said yah but we have it at all the McDonalds back home in Hawai’i(she apologized still not knowing what I was talking about)so when I go home it’s nice to go to Mc’s and have a variety of options to choose from,more importantly tho is when I go to the 1in Kane’ohe and order the infamous teri burger w/mayo and fries 🍟 da bess w/a side of Saimin,to bad other franchises wouldn’t want to look into some of the menu items we have in Hawai’i I can guarantee there business would “boom”especially in areas where Hawaiian/Polynesians/Asians/Pacific Islanders etc. residents resides in. Mahalo Nui Loa (thank you very much)Aloha No’

Aloha Aku! I love your story, thank you so much for sharing :) Agree 100% there is no McDonalds like Hawai'i McDonalds! Now I am craving teri burger heheheh. If only everyone knew what they were missing out on. - Kathy

My first meal in Hawaii 3 years ago during our honeymoon was McD takeaway bought from Waikiki branch... we ate at the sidewalk, looking at the beach, enjoying sunset... what a wonderful memory! Been following your blog since you were studying and dreaming on eating all the Hawaiian food from your posts and finally gotten to be there with my husband, dream come true!

The last time I was in Honolulu (2005) a side of sliced pineapples came with every combo meal. I didn't like pineapple before then but I ate it so often while there that even 15 yrs later, every single time I eat a combo meal at McDonald's, I crave pineapples lol

Hi Liv! Amazing!! Thanks for reading all this time, amazing how the years pass ^_^ So happy you got to come to Hawaii! McDonalds on the beach...I love it. Happy belated honeymoon! - Kathy