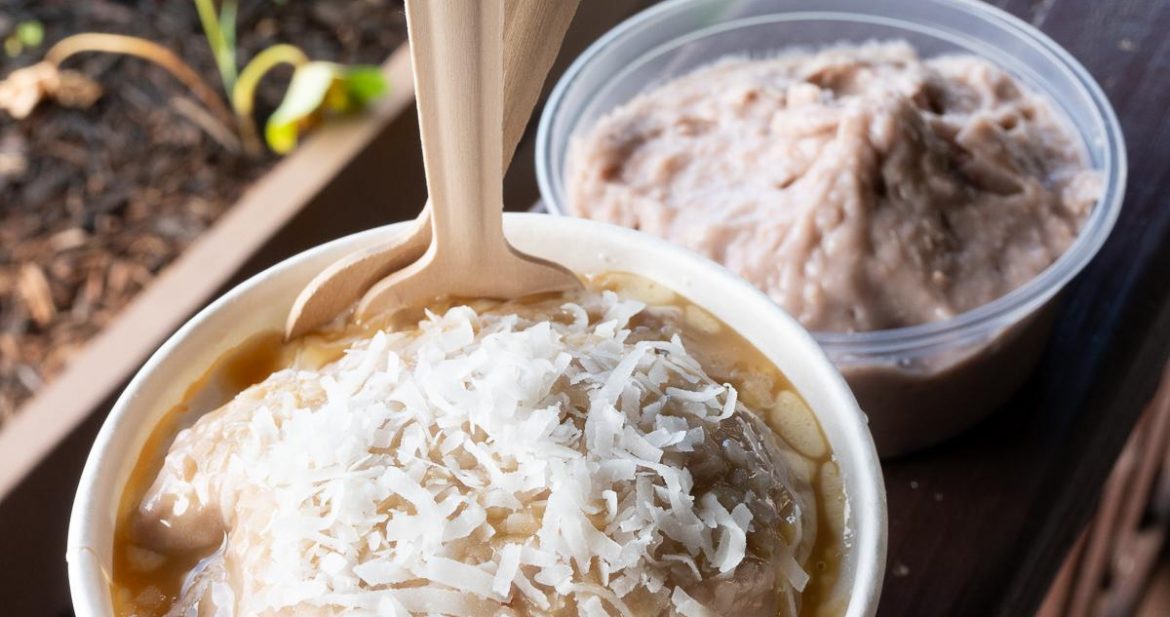 Kalo Bombs is a must visit if you have a sweet tooth and a love for ice cream and fresh kalo (taro).

This tiny take out shop is famous for a dessert that layers ice cream (in popular local Hawaii flavors like kulolo, ube, and haupia) with paiai (which made from fresh kalo), silky coconut cream, and coconut flakes.

Key word here is fresh. Everything is super fresh.

Kalo is the Hawaiian word for Taro.

Paiai is kalo that has been cleaned, steamed, and mashed. (At Kalo Bombs, the scoops of ice cream are topped with fresh paiai.)

Poi is paiai with a bit of water added (for a more loose and smooth consistency). Learn more about Poi in this post.

Kulolo is popular dessert. It's made by combining raw Kalo with coconut milk and sugar. It can be steamed or baked. Learn more about Kulolo in this post.

Kalo Bombs is located on the west side of Oahu (about an hour drive if you're coming from town or Waikiki area). It's located right off Farrington Highway in Waianae.

Heading to any of the beaches on the west side or doing the Kaʻena Point Trail? Definitely stop by Kalo Bombs before or after.

The menu board is short and sweet. Pick the type of "bomb" you're craving and an ice cream flavor to pair with it.

If you're feeling indecisive, just order the Paiai Bomb (or Keiki Bomb for a smaller portion) with kulolo ice cream. It is onolicious ^_^

Paiai Bomb / Keiki Bomb
Paiai Bomb is THE thing to order at Kalo Bombs. It's a cup filled with housemade ice cream (take your pick of Kulolo, Ube, or Haupia). The ice cream is topped with a scoop of fresh paiai, coconut cream, and coconut flakes. Dig in and devour ^_^

I usually order it with the Kulolo ice cream so that you can basically get a double dose of kalo! My sister prefers it with Haupia ice cream because she feels that the haupia's coconut flavor better compliments the paiai. She says it's too repetitive to do kulolo ice cream (but I think it's brilliant heheheh).

This idea of combining ice cream with paiai is a relatively new thing...I've only seen it around Oahu the last several years (wish it was this popular when we were kids!) It is a delicious combination and a fun way to introduce friends to the versatility of kalo.

P.S. Keiki means child in Hawaiian. The Keiki Bomb is a smaller/kid's size of the Paiai Bomb.

Kalo Bomb
Same thing as the Paiai Bombs, but without the ice cream.

Acai Bomb
Same thing as the Paiai Bombs, but the ice cream is replaced with acai. They also top the bomb with granola and almonds.

Paiai (By The Pound)
Super fresh and sweet. Get a scoop for $4, a half-pound for $10, and a pound for $20. I usually get a half-pound container to take home.

How to eat it? Just eat it plain! I love with it a tiny bit of sugar sprinkled on top for breakfast. Or for dessert, scoop a 1:1 ratio of ice cream and paiai into a bowl and devour. For lunch/dinner, paiai serves as the starch (alongside rice) with a nice hot lau lau or luau stew. And maybe even some kalua pork and lomi lomi salmon!

Going on the weekend?

Go early! They close at 6pm but often sell out before.

Kalo bombs is located in a complex with several other shops (nail salon, bakery, etc). The complex has free parking right in front of the shops.

Where to eat it?

Kalo Bombs is take out only, and because most people order with ice cream, you'll want to eat it right away! There's a small bench adjacent to the shop that can seat 2-3 people...we always try to get that seat. But if the bench is taken, we'll just eat it in the car.

Another option (if you plan to head to the beach afterwards) is to bring a cooler with you. Pack the cooler with ice packs. Put your order inside the cooler and drive to the beach. Eat at the beach! So good (just make sure the sand doesn't blow into your cup ^_^)

Oh man, Hawaii is the best place on earth to be. Also check out Waiahole Poi Factory for a similar dessert called Sweet Lady of Waiahole. It's a single serving cup of haupia ice cream topped with warm kulolo...bliss.