Whether you call it coconut cake or haupia cake or coconut-haupia cake, all you need to know is that Hawaii loves these cakes. Here’s where to find the best of the bunch. 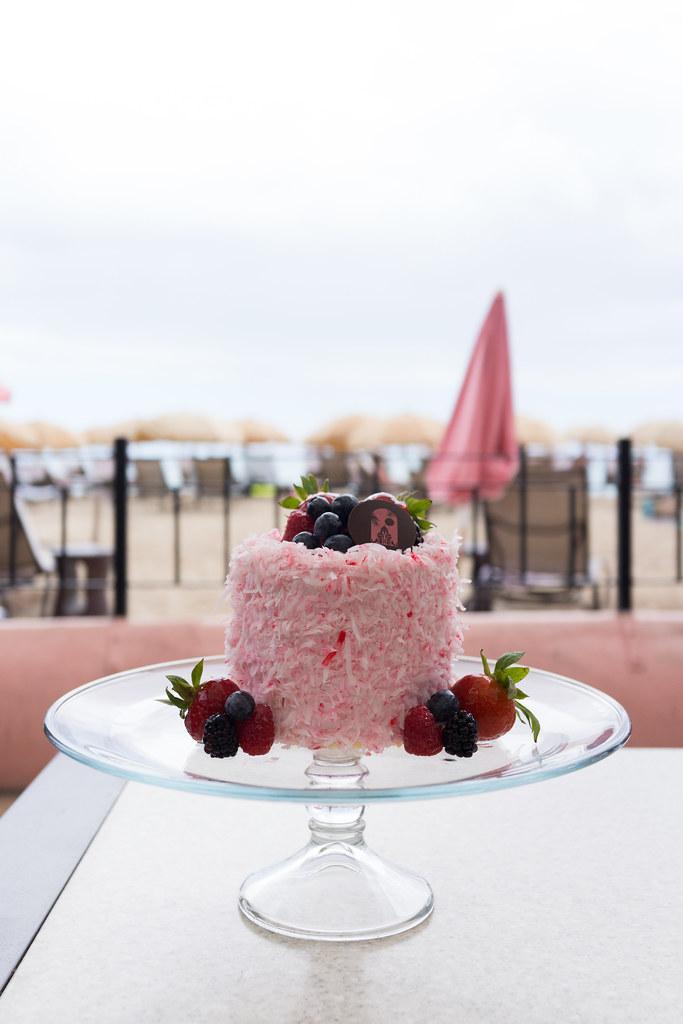 Coconut cakes in Hawaii are EXCEPTIONAL.

Sometimes they’re called coconut cakes, sometimes they’re called haupia cakes. To make things even more confusing, you’ll also see the name coconut-haupia cakes. They’re all pretty much the same thing. Haupia is a Hawaiian coconut pudding/custard. So if you make a coconut custard for your cake, it’s technically also a haupia cake. But let’s not get bogged down with these details. Point is, order the cake. Eat the cake. They are so good! Coconut haupia cakes are made of three main parts:

Spend enough time in Hawaii and you’ll see coconut haupia cakes all over the island. From hotels to fancy restaurants and local bakeries, there is no shortage. But if you’re going to eat them, might as well eat the tastiest ones, yes? These are the best spots. 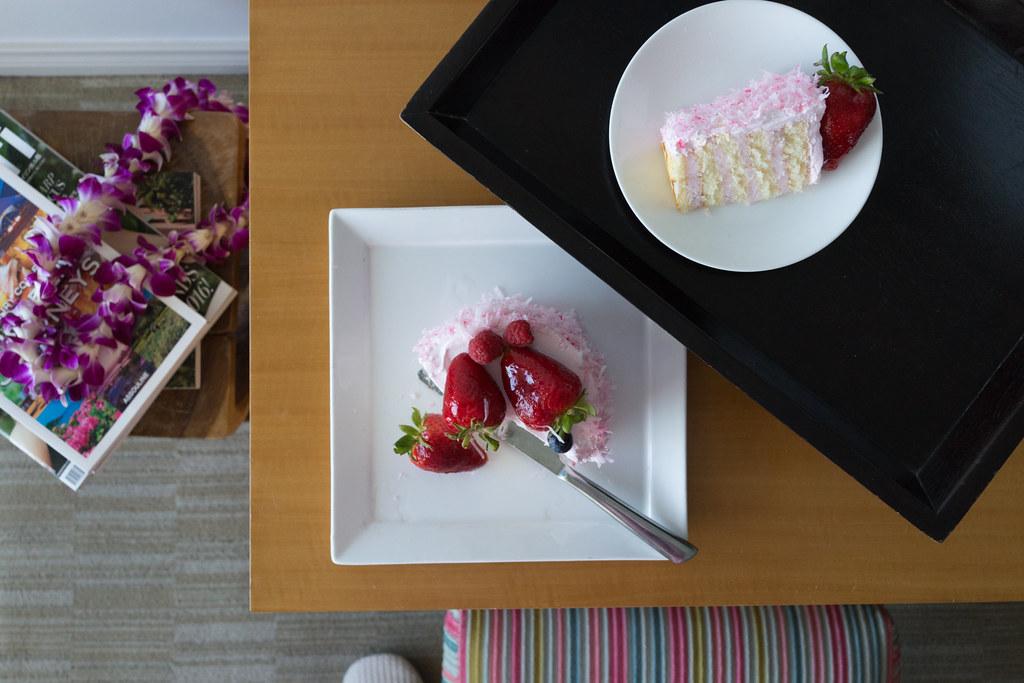 Royal Hawaiian Hotel is famously known as the “Pink Palace of the Pacific,” so it is fitting that their signature coconut haupia cake is also pink! The official cake name is: Only at The Royal Signature Pink Haupia Cake. You can find this cake in many different forms throughout the hotel. Pictured above is a whole mini cake that you can special order.

If you just want a slice, visit Surf Lanai restaurant where they have it on the lunch dessert menu and at Azure where it appears on the dinner menu. The cake is made from vanilla sponge cake, pink haupia cream, and pink coconut flakes. 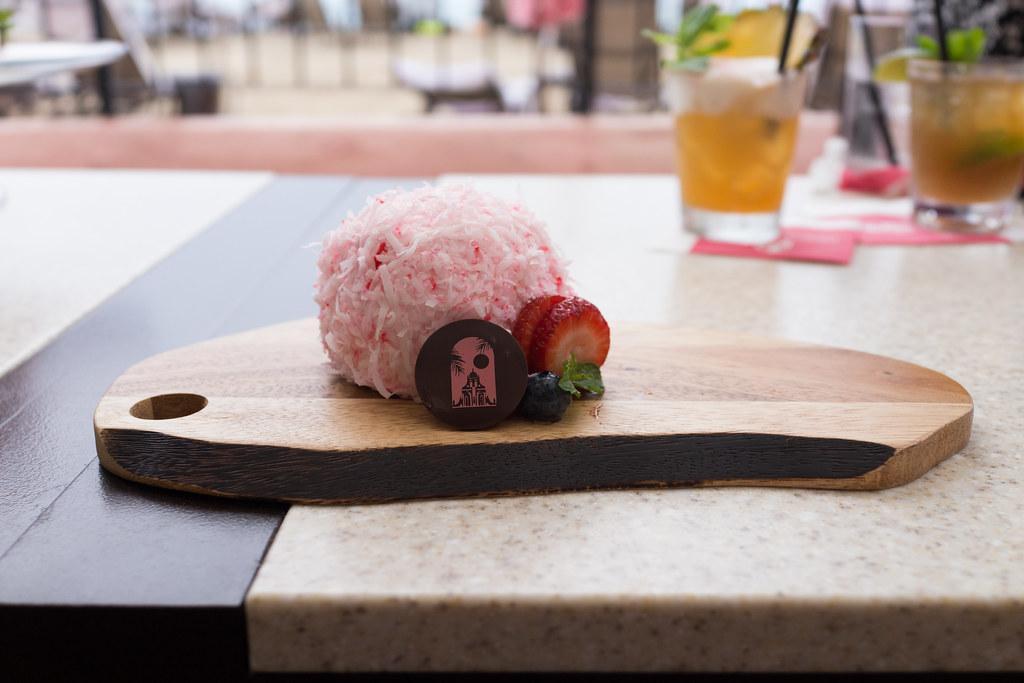 …and at the hotel bakery (Royal Hawaiian Bakery), you can find the cake in the form of the Royal Hawaiian Signature Pink Snowballs. It’s super cute and nicely sized for one. I sometimes stop at the hotel just to pick these up for afternoon snack. 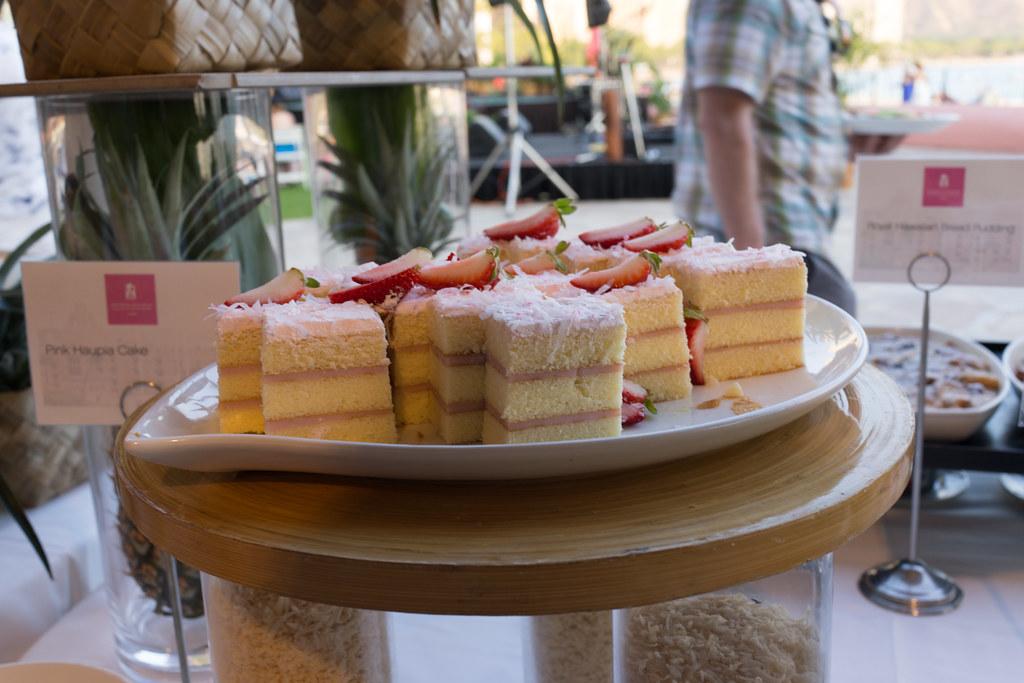 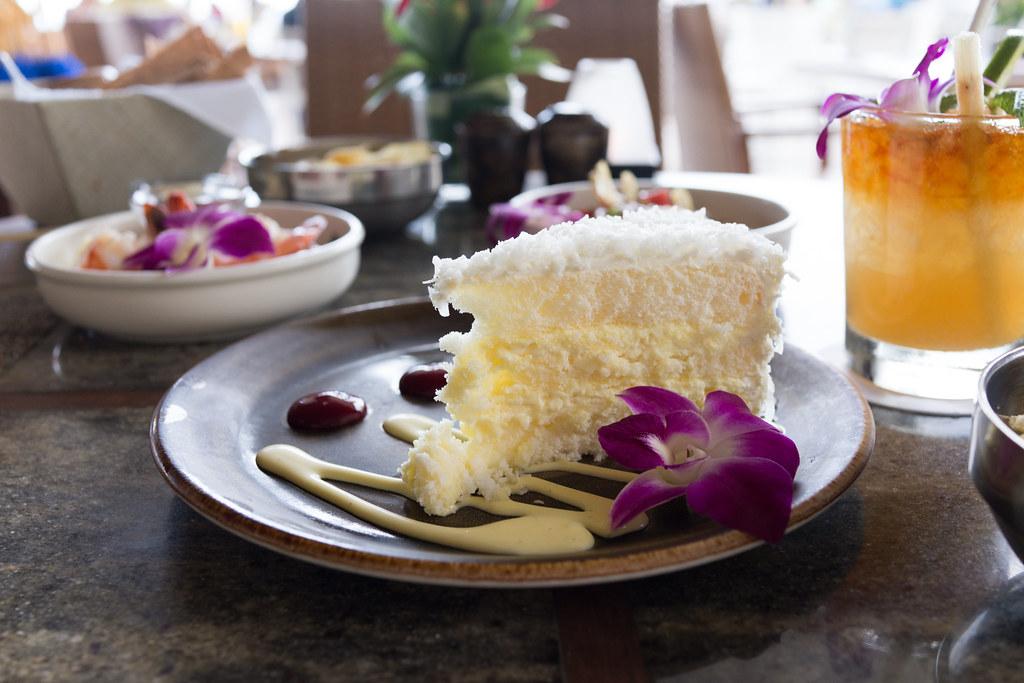 Next is the Halekulani Hotel. (I know I mention Halekulani a lot, especially with yesterday’s House Without a Key post and a recent Afternoon Tea post, along with the detailed tea post…but this is a wonderful hotel.) 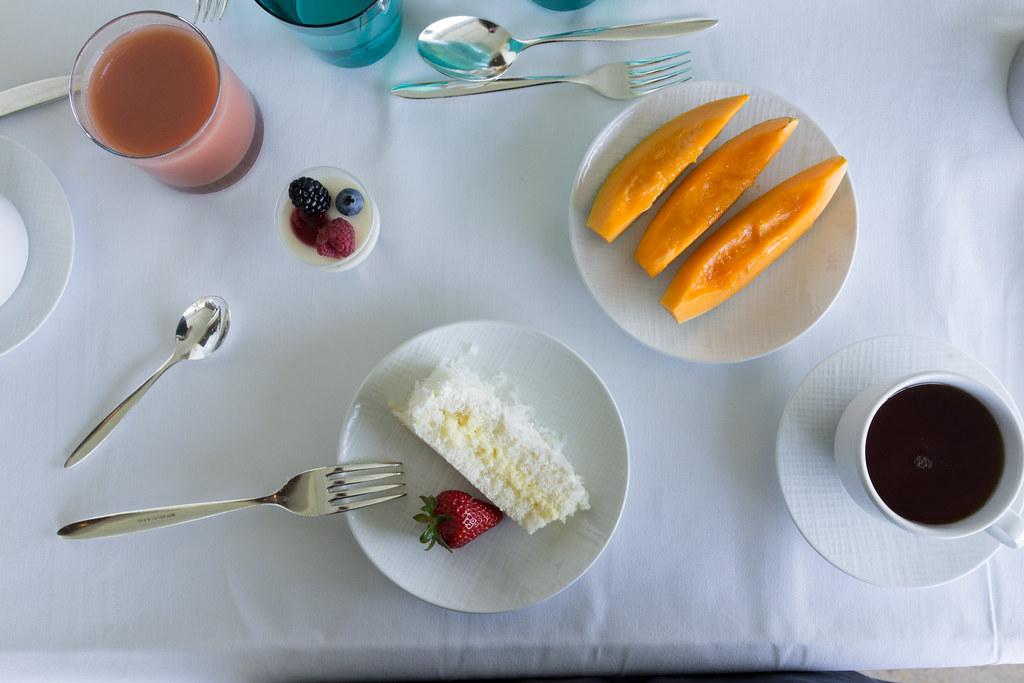 You can order Halekulani’s coconut cake at Orchids. It’s on the lunch/dinner menu, and part of the Sunday brunch buffet (the cake is double instead of triple layer at brunch, because they assume you’re not eating a ton of one cake at a buffet. Little do they know bwhaha). If you don’t want to commit to a full meal at Orchids, you can also find the same coconut cake at House Without a Key and at Lewer’s Lounge. 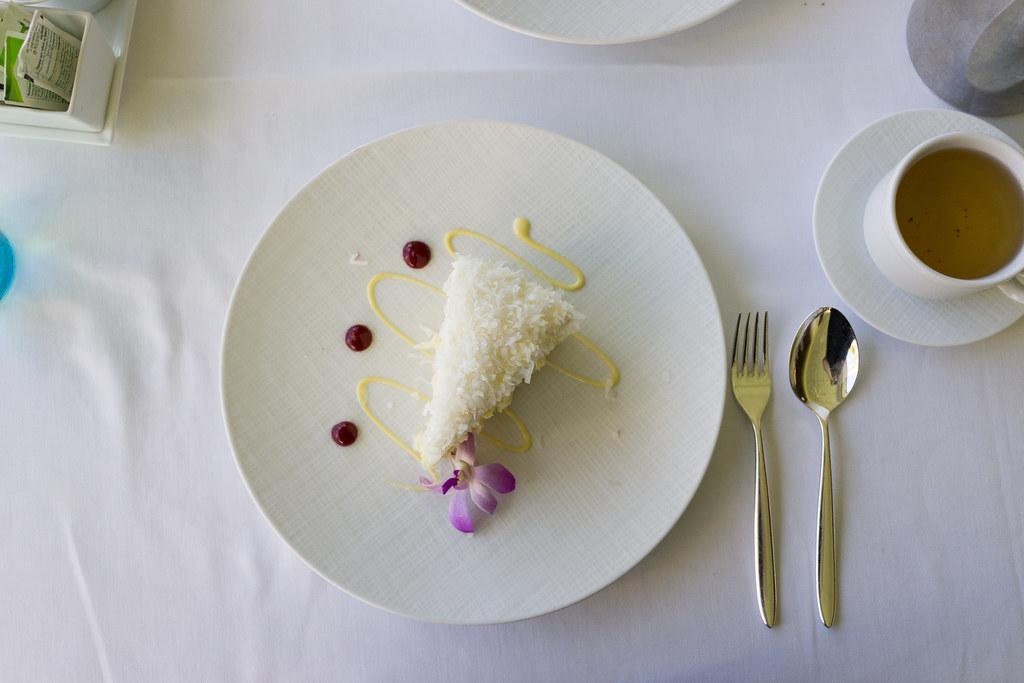 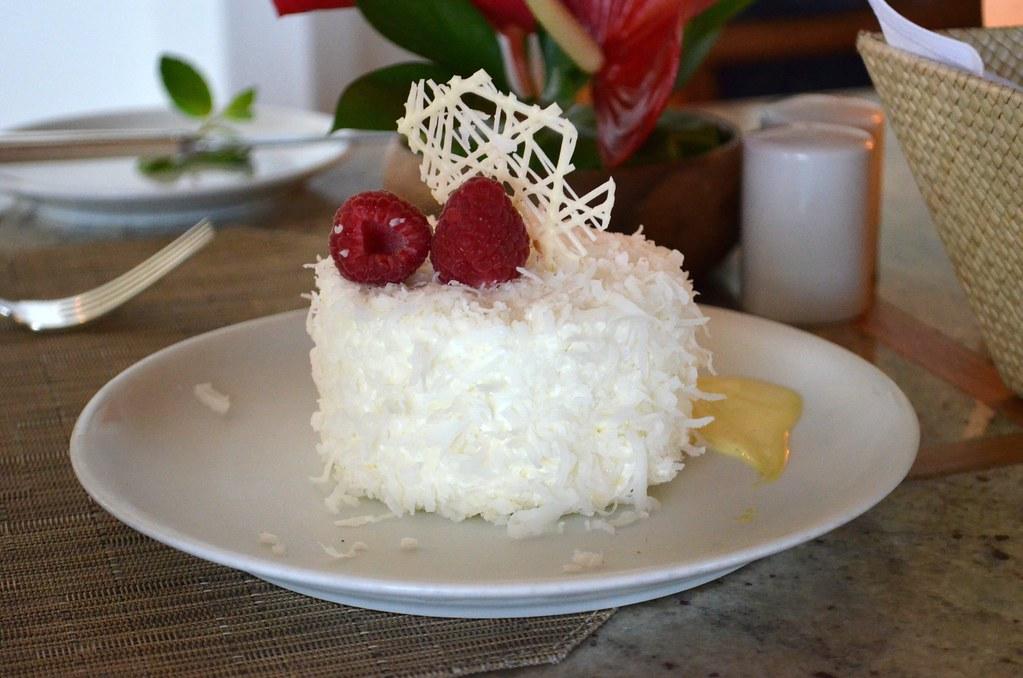 Like many of my favorite Hawaii food things, I’ve been eating this cake for many years and have happily seen it go through many reiterations. There was a short period where the coconut cakes were presented as individual rounds which I really loved. 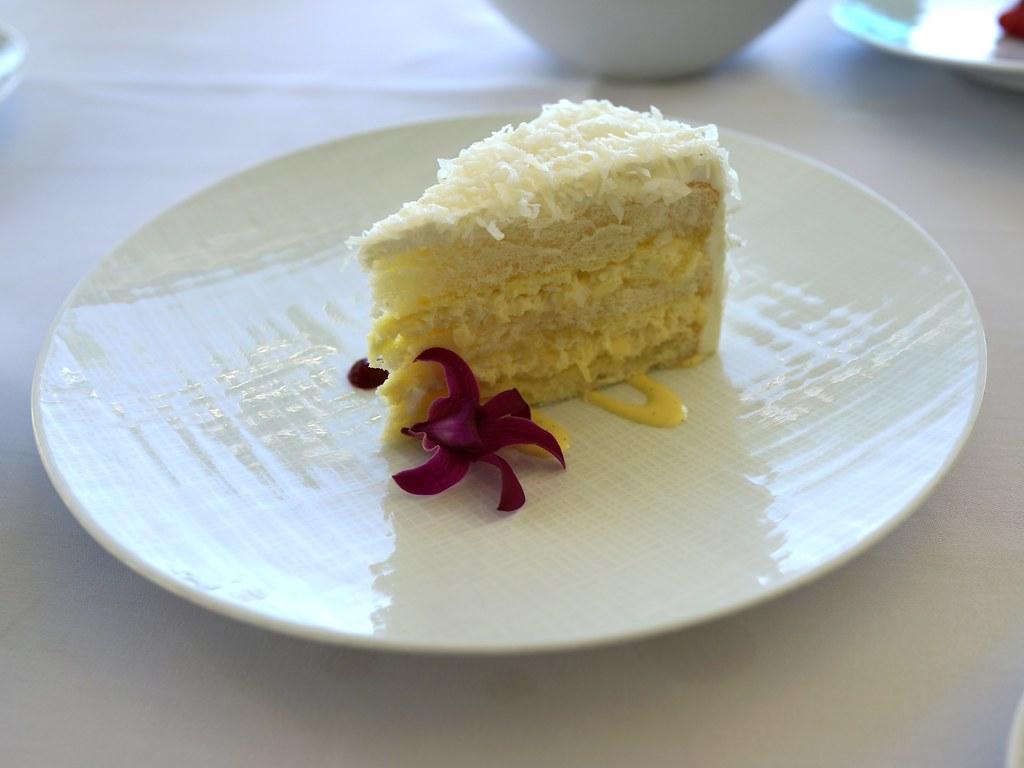 The Halekulani coconut cake is made out of three layers of sponge cake and two layers of coconut pastry cream (made extra light with whipped cream). It’s frosted with more whipped cream and coconut flakes all over. The cake is often served with raspberry coulis (which I am not a fan of). I just like the cake plain and simple.

If you want to make it at home, Halekulani shares their Halekulani Coconut Cake recipe here…give it a try ^_^ 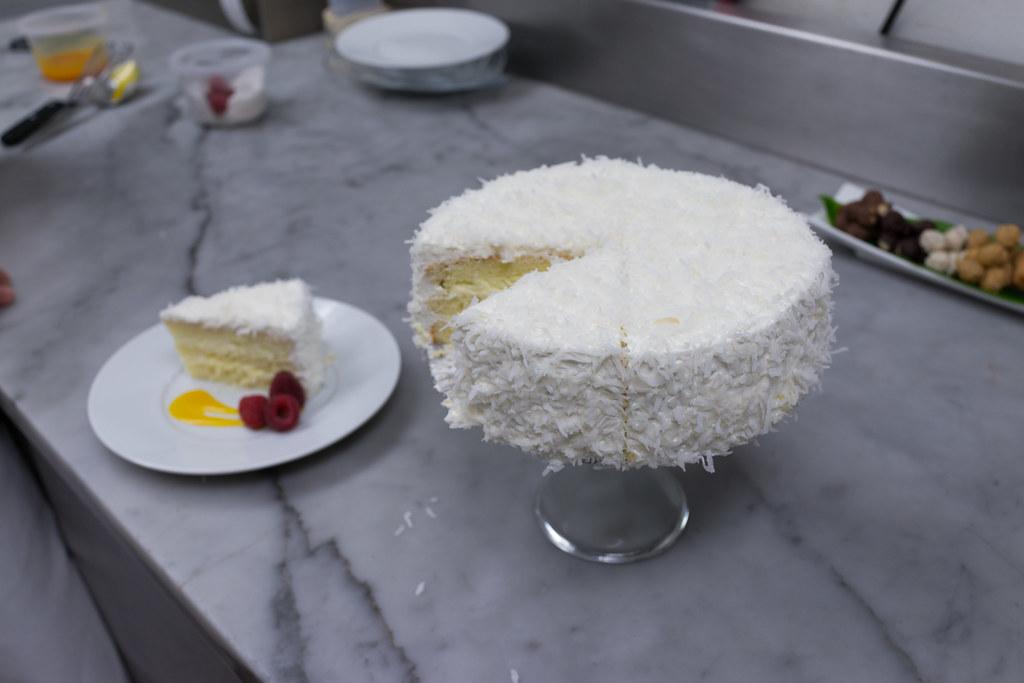 And now we’re at the Kahala Hotel (also home to a great afternoon tea). Here they make a very beautiful and classic Hawaii coconut cake. I got to check out cake prep in the kitchen one afternoon (dream come true!)… 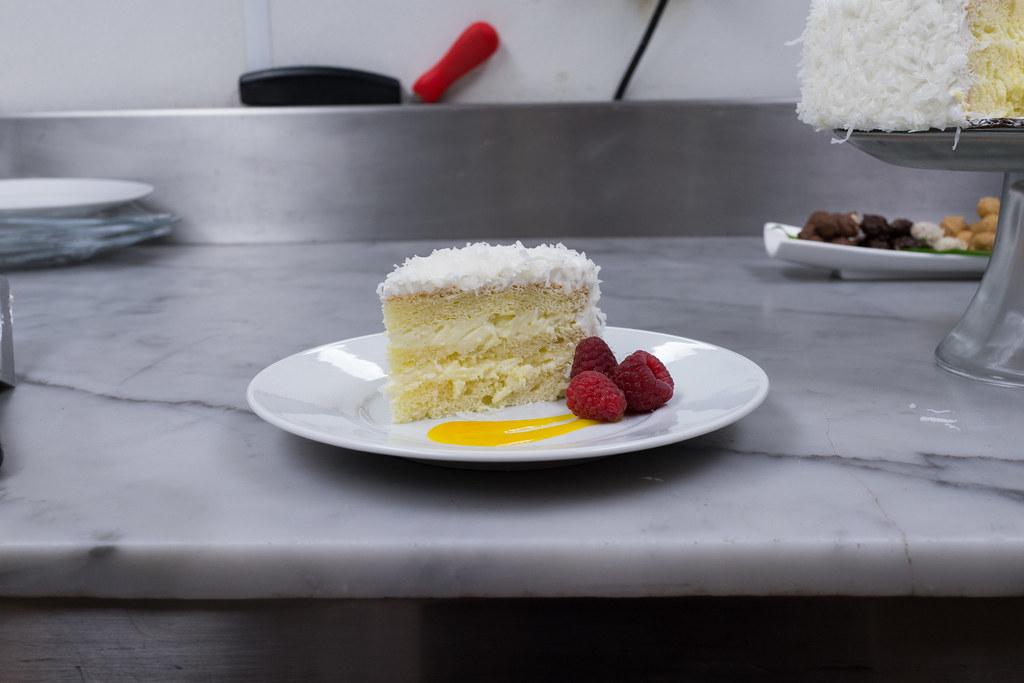 …and devour this beauty. First slice, so fresh. You can never have enough coconut cake. 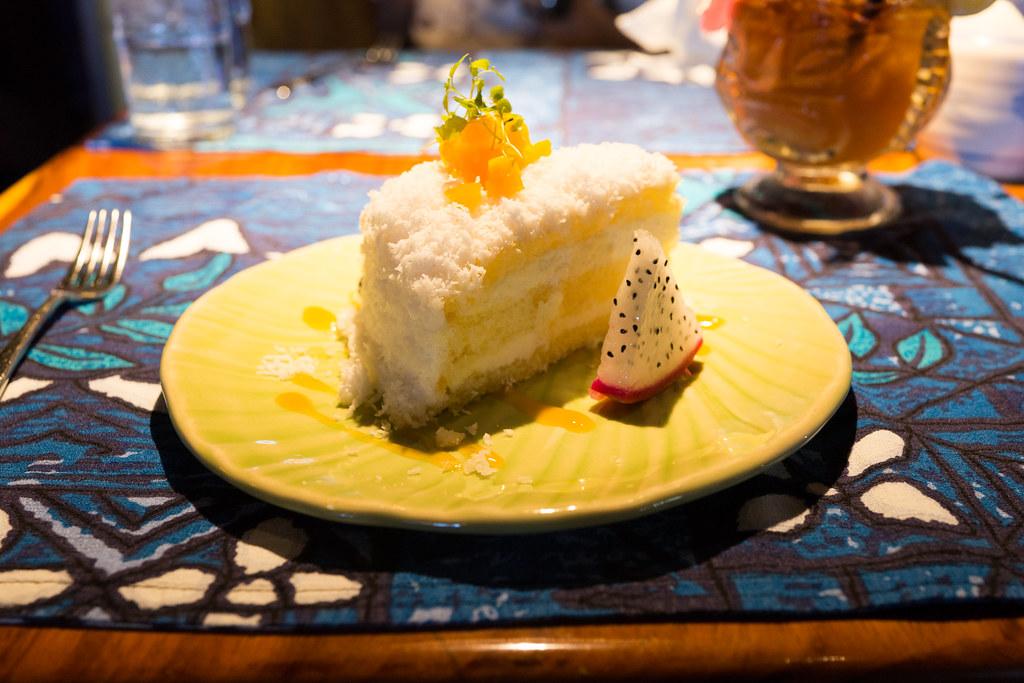 Coconut cake isn’t on the regular dessert menu at Mama’s Fish House, but it occasionally appears as a special. If you come on a lucky day, please PLEASE order this cake. It is insane and will make you so happy.

They use fresh coconut milk to make the custard filling. They also grate the coconut meat (from the same fresh coconuts where they got the milk) to make the flakes that top this cake. The sponge cake is so delicate and I love how it pairs with the custard. It’s perfect. You can really taste how fresh all the components are. I love this cake so much and will fly to Maui just to eat this.