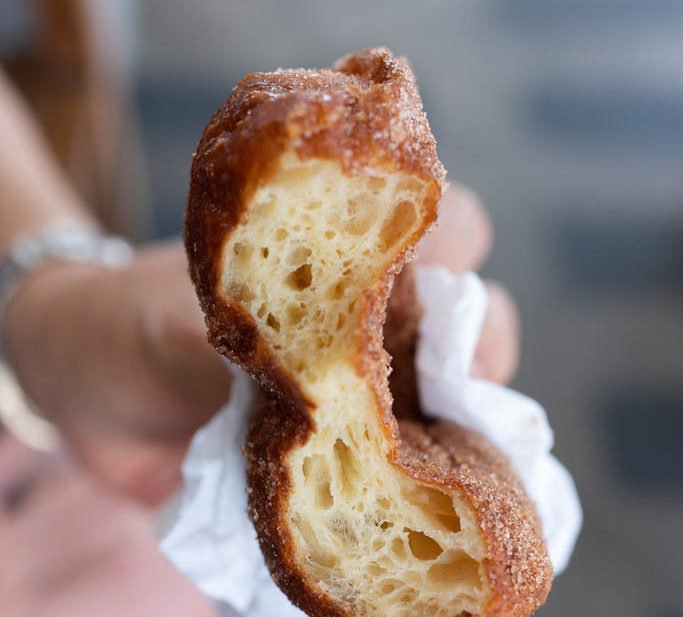 Home » Places to Eat in Hawaii » Donuts in Hawaii

We have many different types of donuts in Hawaii. Traditional American donuts are not as popular, but we love poi donuts, mochi donuts, malasadas, andagi, and much more! 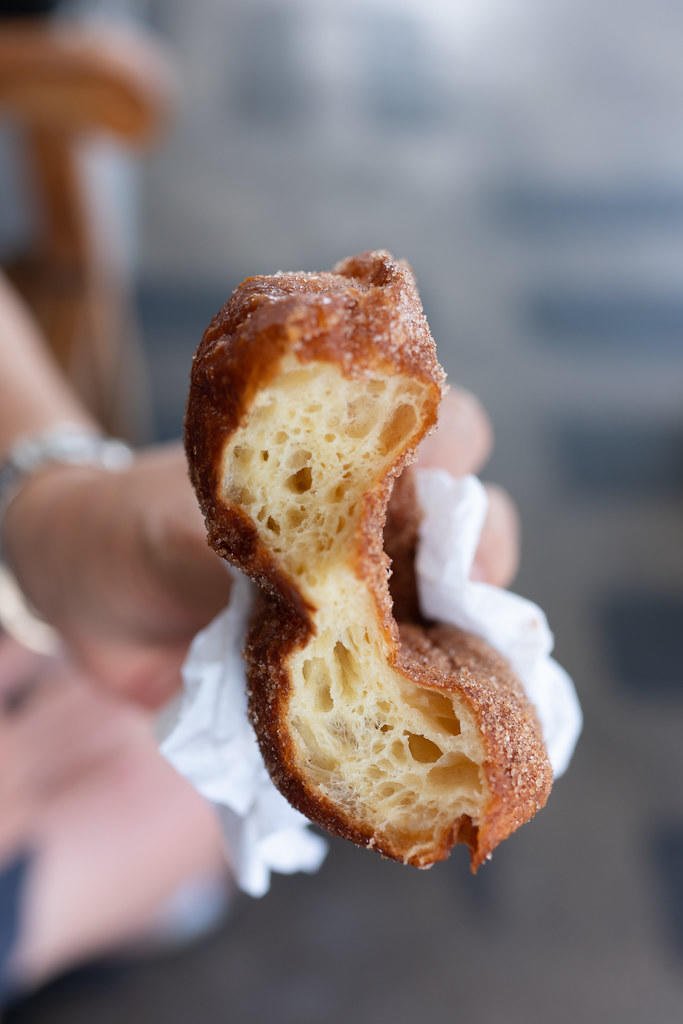 Whether you spell it donuts or doughnuts...all you needs to know is that we have great ones in Hawaii!

We love all types of sweets and desserts in Hawaii. We define donuts as any sweet, deep-fried dough. This means malasadas and andagi also fall into the donut category.

Want to know something interesting? Hawaii has many great donuts, but we aren't that interested in "regular" donuts, like the old fashioned donut shops you find across the mainland US. Because Hawaii's culture is so distinct and Asian leaning, the other types of donuts (like malasadas and andagi) are much more popular

Here's where to find the best donuts in Hawaii ^_^ 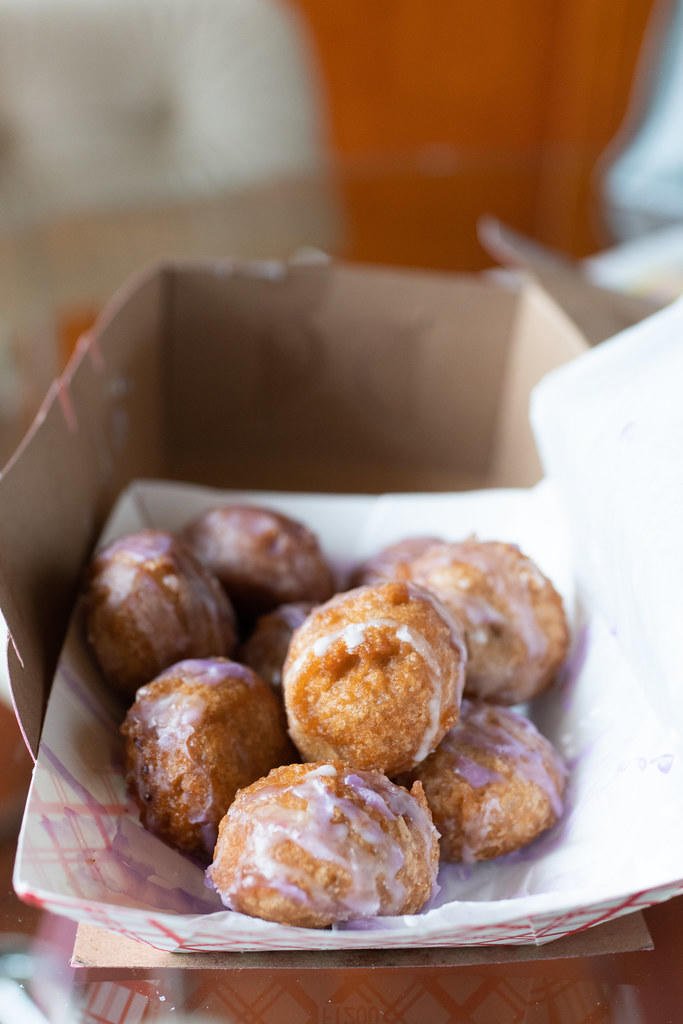 Poi is important in Hawaii...as are poi doughnuts! Poi is made from steamed, pounded taro root and as is the primary starch in traditional Hawaiian cuisine. There's been a sort of resurgence and renewed interest in poi from the younger generation (this is a really good thing), and I love seeing poi in so many desserts now.

All types of poi donuts can be found in Hawaii:

Uncle Lani's Poi Mochi (Oahu)
These poi mochi donuts come as bite size orbs. They are hot, drizzled with a sugar glaze and super delicious! Crisp exterior, chewy inside, and just enough of the poi taste. So good!! They're located in Kapolei (about 45-minute drive from downtown Honolulu), and it's worth the drive.

Kamehameha Bakery (Oahu)
Poi glazed donuts are the main offering at the famous Kamehameha Bakery. They look more like malasadas (no hole, one big puffy ball) as opposed to traditional donuts. It's covered in a crackly glaze and bright purple poi color inside. 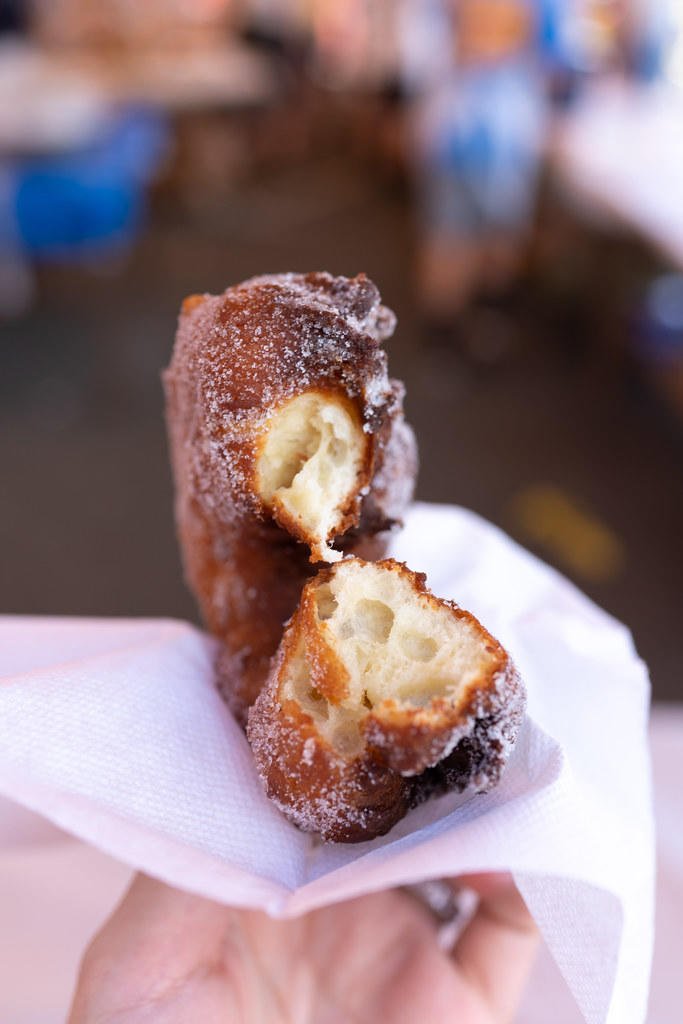 Malasadas, oh man! We could devote an entire post to malasadas alone...actually, we have! Heheheh ^_^

Malasadas came to Hawaii via the Portuguese. They are egg, yeast-based donuts, rolled in sugar. Traditionally no hole in the middle (with the exception of the Punahou Carnival version). Malasadas are one of the most iconic Hawaii food items! We LOVE malasadas in Hawaii. Here's where to get the best malasadas:

Punahou Carnival (Oahu)
Available just the first weekend of each February, Punahou Carnival malasadas are alone worth flying to Hawaii for. The malasada booth is staffed entirely by volunteers who make thousands of malasadas over carnival weekend. They put a hole in the middle and fry them real dark so that it's pretty crisp on the outside. Inside is all eggy soft and wild...wow! They roll them in a sugar-cinnamon-nutmeg mix. I go crazy for these. Full Punahou Carnival post here.

Pipeline Bakeshop and Creamery (Oahu)
Owner of Pipeline worked at Leonard's for many years, but Pipeline has their own distinct version of the malasada. They're fried to order and dusted with your choice of the sugar (I like the li hing mui sugar). You can also get malasada bread pudding and malasada ice cream, and even malafrozada (which is malasada dough wrapped around a scoop of ice cream and deep fried.

Penny's Malasadas (Oahu)
Look for the hot pink truck in the parking lot of the Polynesian Cultural Center. Penny's is a newcomer to the malasda scene but already winning the hearts and votes of many. It's beautifully light with a perfectly golden exterior, hits all the ideal malasada points.

Note: I don't think there's such thing as a "best" malasada in Hawaii because everyone does it slightly different. It's ok to love them all. I love that Leonard's is eggy, that Penny's is so light, that Pipeline has this great heft to it, and that Punahou puts a hole in the middle so that you have extra of that exterior crisp goodness. They are all winners. 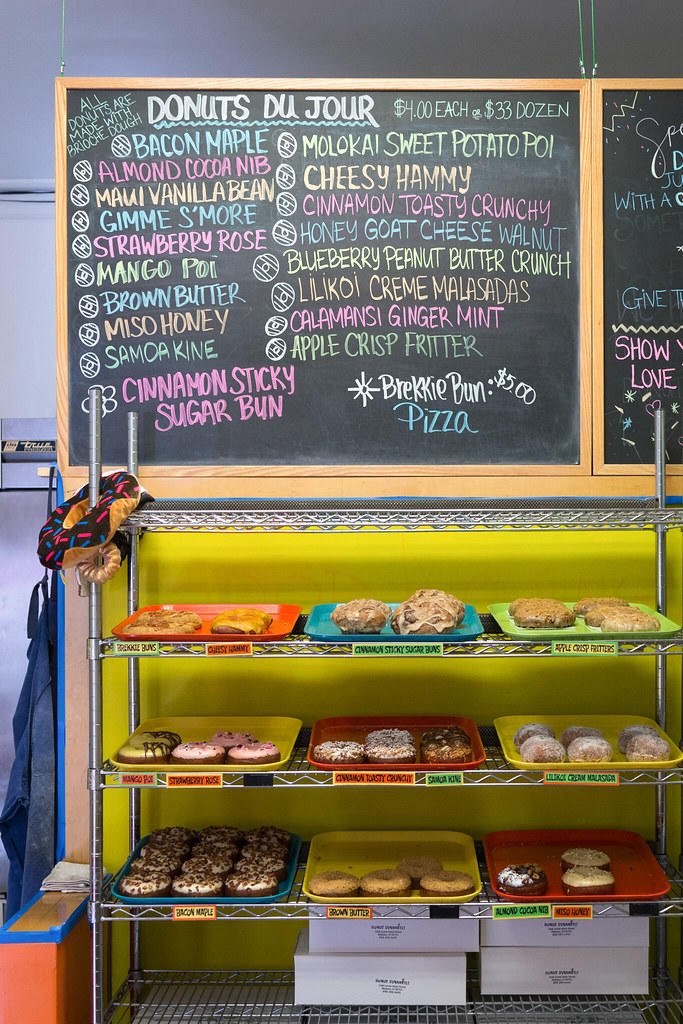 As noted at the top of this post, we don't have many old fashioned donut shops but there are a few great places that make "regular" donuts:

Holey Grail Donuts (Oahu)
This donut shop is originally from Kauai but they just opened an Oahu location in 2020. These donuts are made from taro! They steam and pound the taro (same process for making poi). The taro is combined with wheat flour to create the donut dough. The flavors change weekly. Donuts are fried to order (in coconut oil) so you always get a hot donut...definitely devour it on the spot! These are cake donuts with a crisp exterior and fluffy interior. The classic with honey and sea salt is great, as are all the seasonal/fun flavors. Pictured above is one each of the strawberry-green tea, Kauai chocolate and cacao nibs, maple and smoked coconut, and poppyseed and kumquats donuts.

PURVÉ Donut Stop (Oahu)
Located right across the street from Ala Moana Center, PURVÉ is known for fun flavor combinations like haupia with macadamia nuts and chocolate-banana, and lemon glaze with li hing mui. They are are all cake donuts, made hot throughout the day. 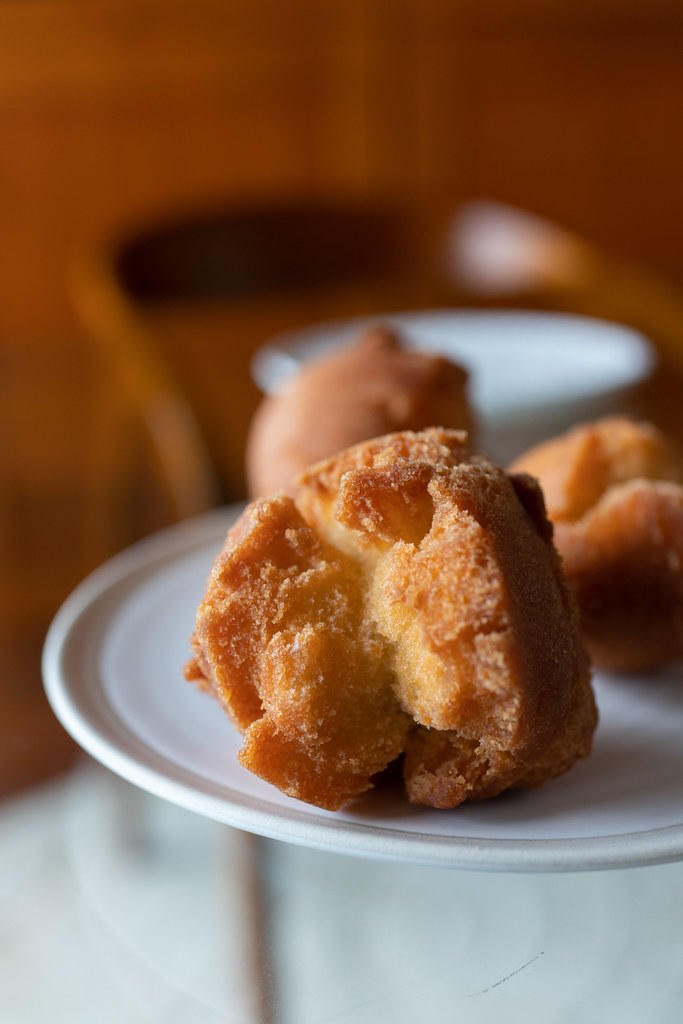 Andagi is an Okinawan donut. We have lots of Okinawan influences throughout all parts of Hawaii culture, it was only natural that Hawaii embraced and adopted the Okinawan donuts as our own.

Andagi are about the size of ping pong balls, deep-fried, no hole in the middle. No icing or sugar dusting. They are dense (more like a cake donut than a yeast donut), with a crisp, craggy exterior (the best part). Here's where to find andagi:

Teruya’s Andagi (Oahu)
They fry fresh batches in the morning, best to call before you go to ensure a hot batch. Unlike regular yeast donuts, andagi should only ever be eaten hot, hot, hot. Full Teruya's Andagi post here. 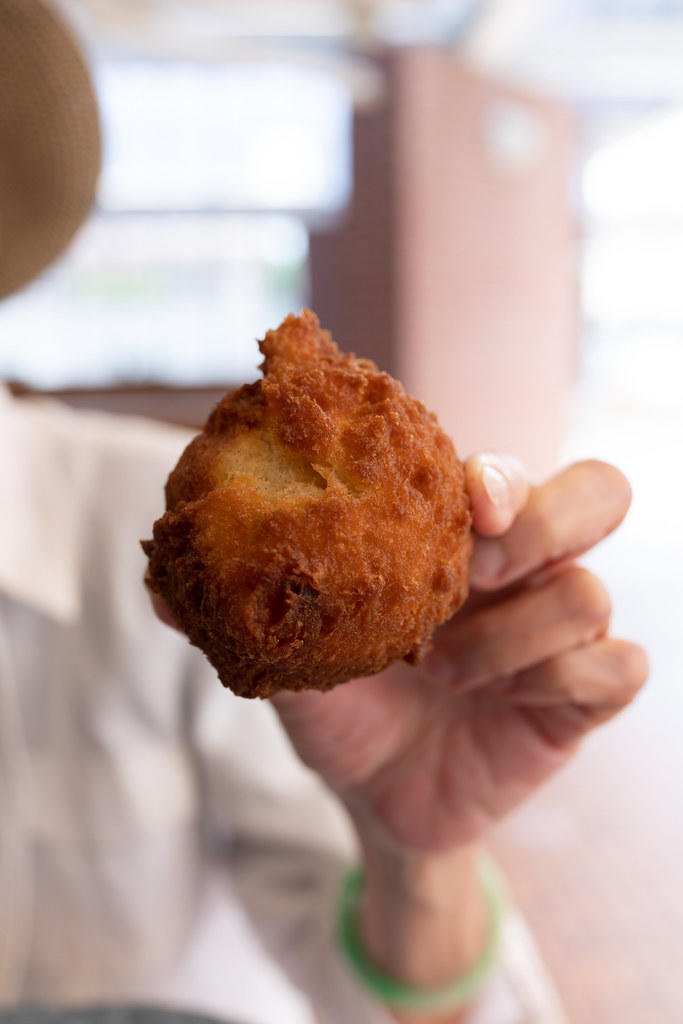 Zippy’s (Oahu, Maui, Big Island)
Andagi is fried to order here. Whether you’re getting one or a dozen, you’ll be guaranteed a hot andagi. Full Zippy's post here.

Da Andagi Guy (Oahu)
Da Andagi Guy is hard to locate, but updates his Instagram once in a while. It's worth seeking him out! He's most regularly set up in front of the Waipahu location of Don Quijote market. He's also at many local bon dance events during the June-August season. 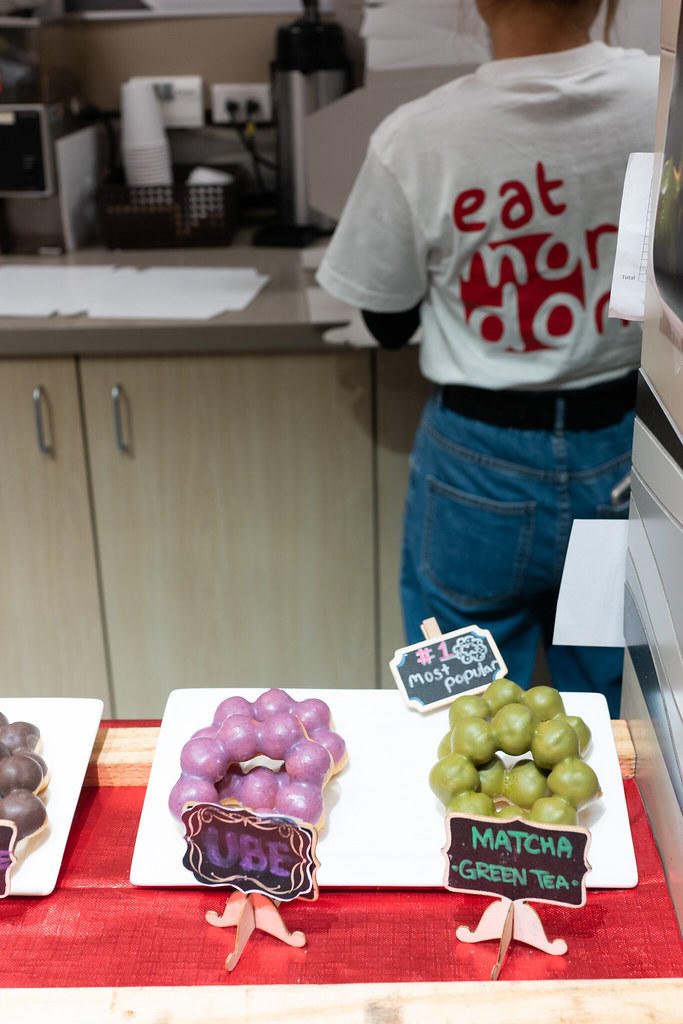 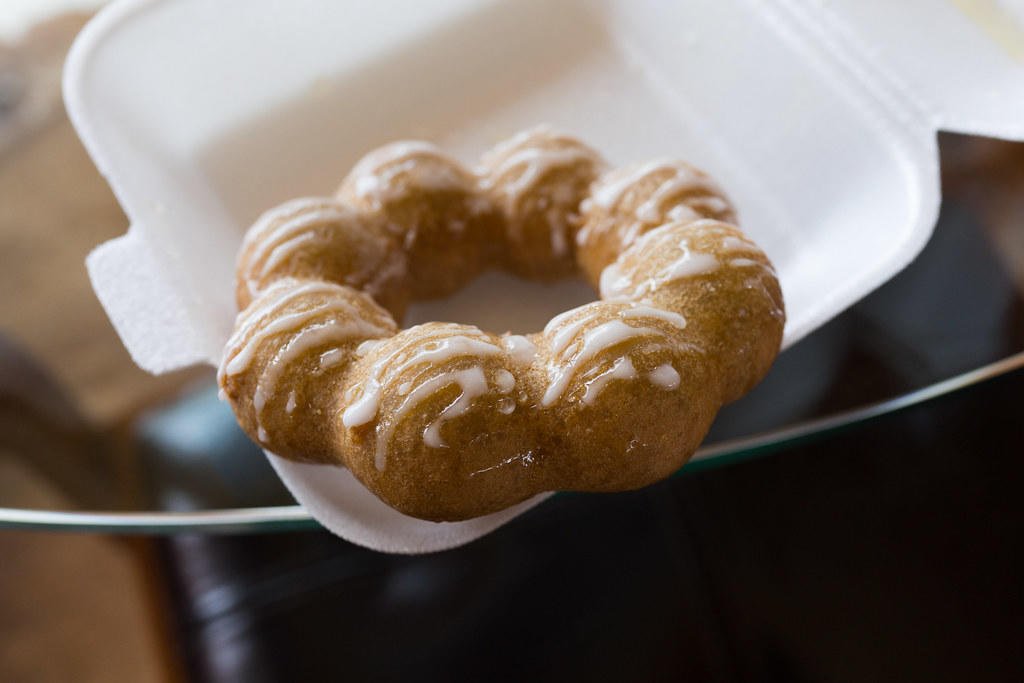 Liliha Bakery (Oahu)
Liliha has three locations in Honolulu, and all locations offer both green tea mochi donuts and poi mochi donuts (mentioned at the top of this post).

Brug Bakery (Oahu)
Brug has multiple locations in Honolulu (including Kahala Mall, Ala Moana Center, and in Manoa Valley). They're a Japanese bakery, and make some of the best mochi donuts (plus mochi bread and other mochi pastries!) in Hawaii.