Portuguese Bean Soup is a popular local Hawaii soup. The key ingredients are Portuguese sausage, smoked ham hocks, and macaroni. It’s a hearty soup that can easily be a meal! 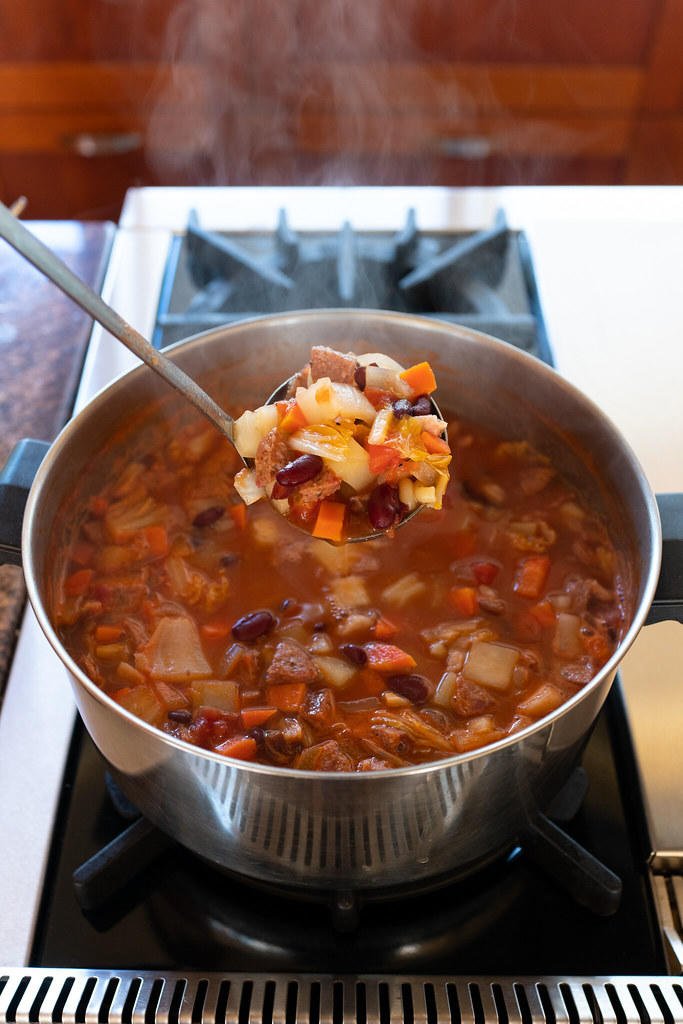 What Is Portuguese Bean Soup?

Ahh, Portuguese Bean Soup! This is the stuff of dreams.

Portuguese Bean Soup is an iconic local Hawaii (not Hawaiian – here’s the difference) dish made from a stock of smoked ham hocks. You boil the ham hocks in water for a few hours. Then chop off all the meat and skin, and add it back to the pot with other ingredients like Portuguese sausage, red kidney beans, potatoes, onions, carrots, cabbage, and macaroni noodles. 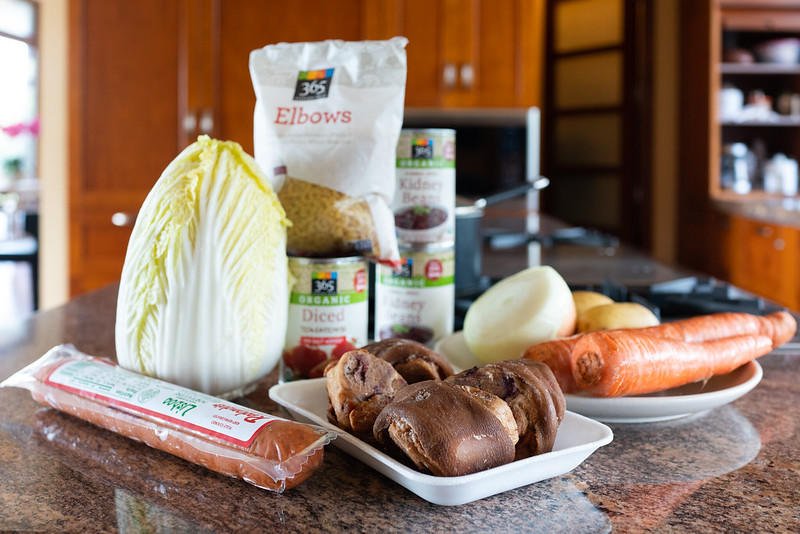 The red color of the the soup comes from tomato sauce and diced tomatoes. Season with salt and pepper, and you’re ready to eat. The soup has real nice deep smoky notes thanks to the ham hocks (make sure to use smoked ham hocks).

It’s a simple, hearty soup that really warms you up all the way. A bowl of this soup makes for an ideal easy weekday lunch. Make a big batch on the weekend, and you’ll have soup for the week. 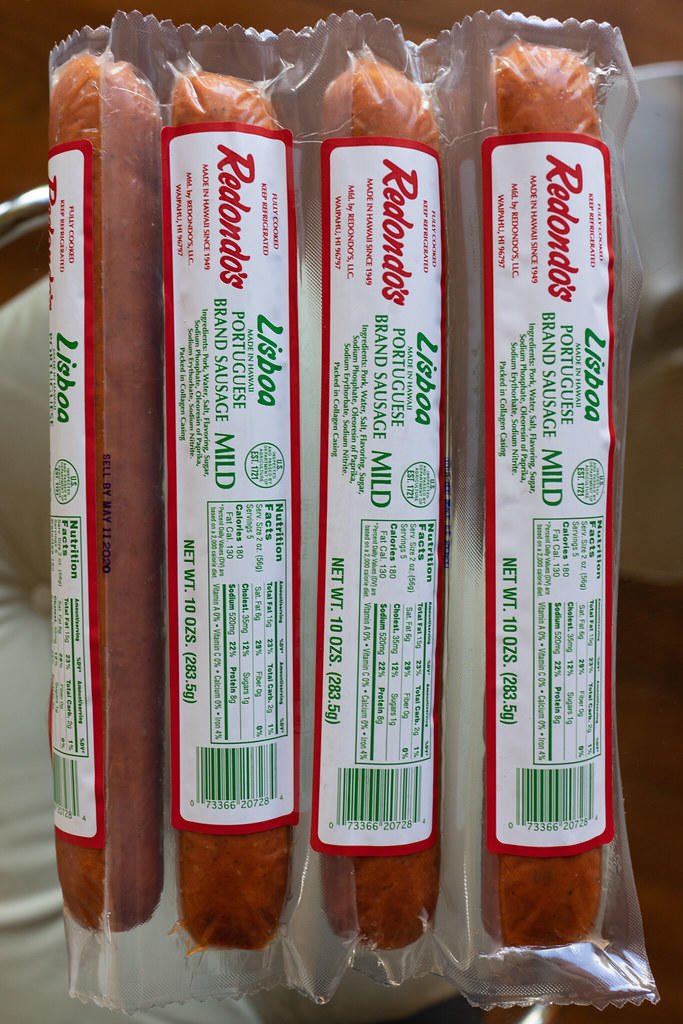 Portuguese sausage is a type of pork sausage that is popular in Hawaii. It was brought to Hawaii by the Portuguese in the 1800s (where it’s still called linguiça), and is an important part of everyday local food in Hawaii. The sausage made from pork and seasoned with paprika and garlic. Redondo’s Portuguese Sausage is the most popular brand locally.

You can find Portuguese sausage on breakfast plates at McDonald’s Hawaii and Zippy’s and even Liliha Bakery. You’ll see Portuguese sausage for sale everywhere in Hawaii. There are four-stick packs at Costco (best deal!) and individual sticks Longs Drugs and all the supermarkets. Many families keep a few sticks of Portuguese sausage in the fridge…it often comes in handy.

Outside of Hawaii, you can sometimes find Portuguese sausage for sale at Japanese or Chinese supermarkets. I’ve seen it at Nijiya in San Francisco. 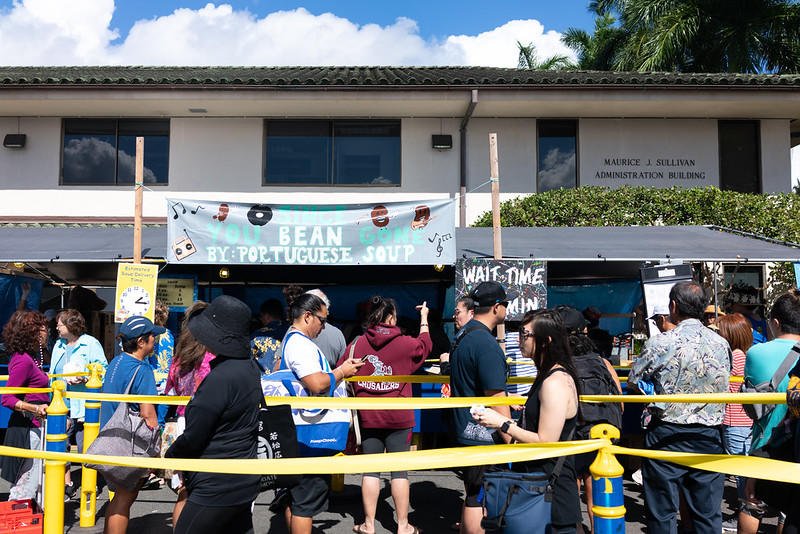 Line for Portuguese Bean Soup at the Punahou Carnival 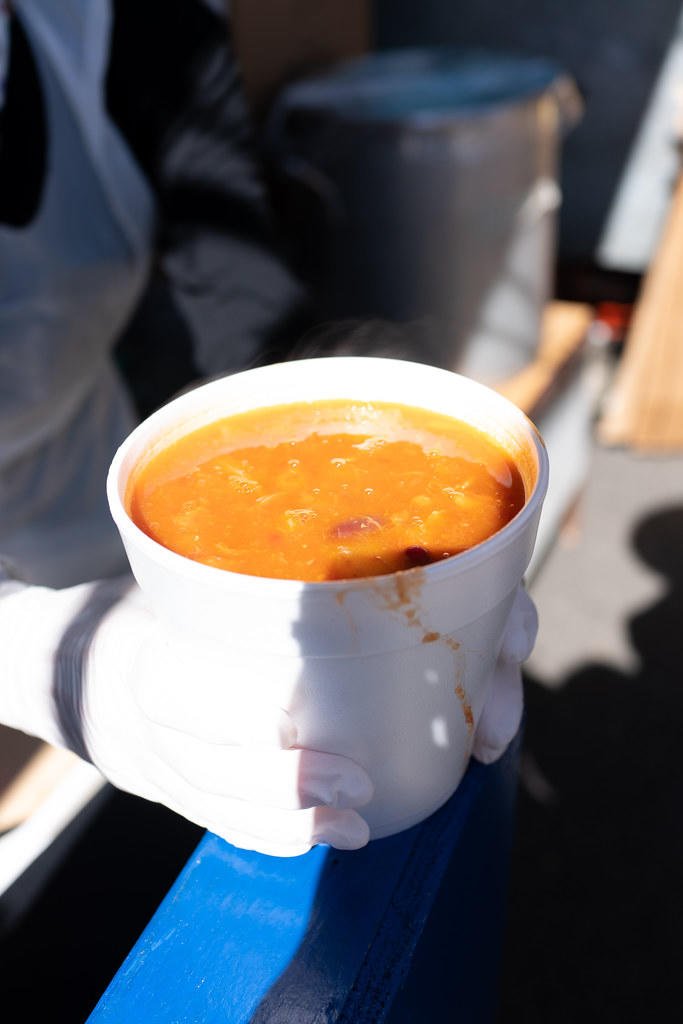 However there are a few spots that do serve this soup: 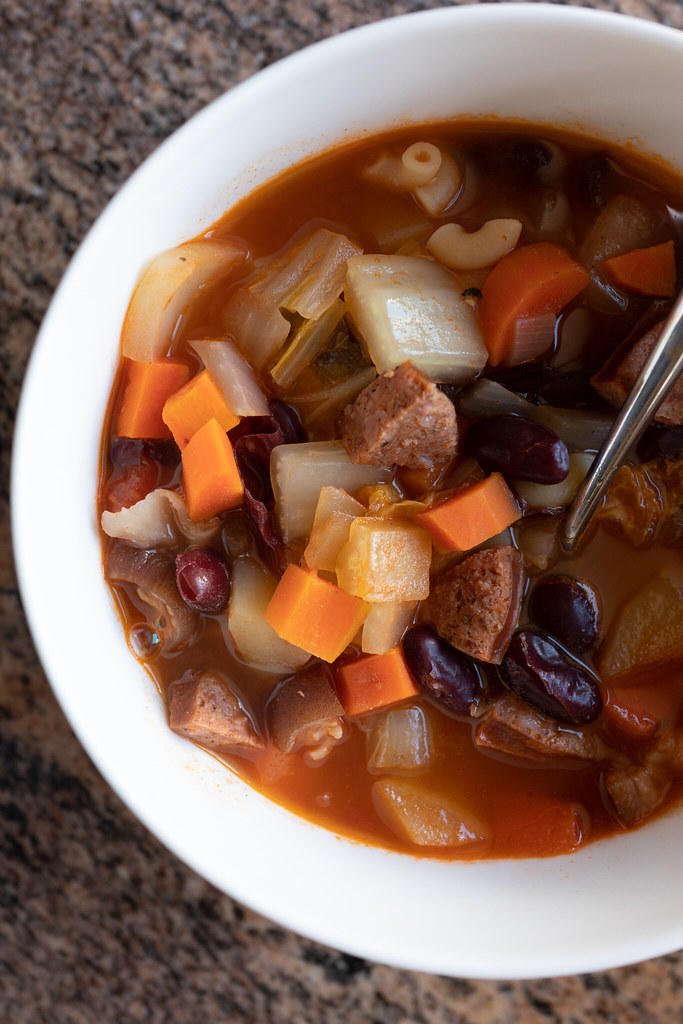 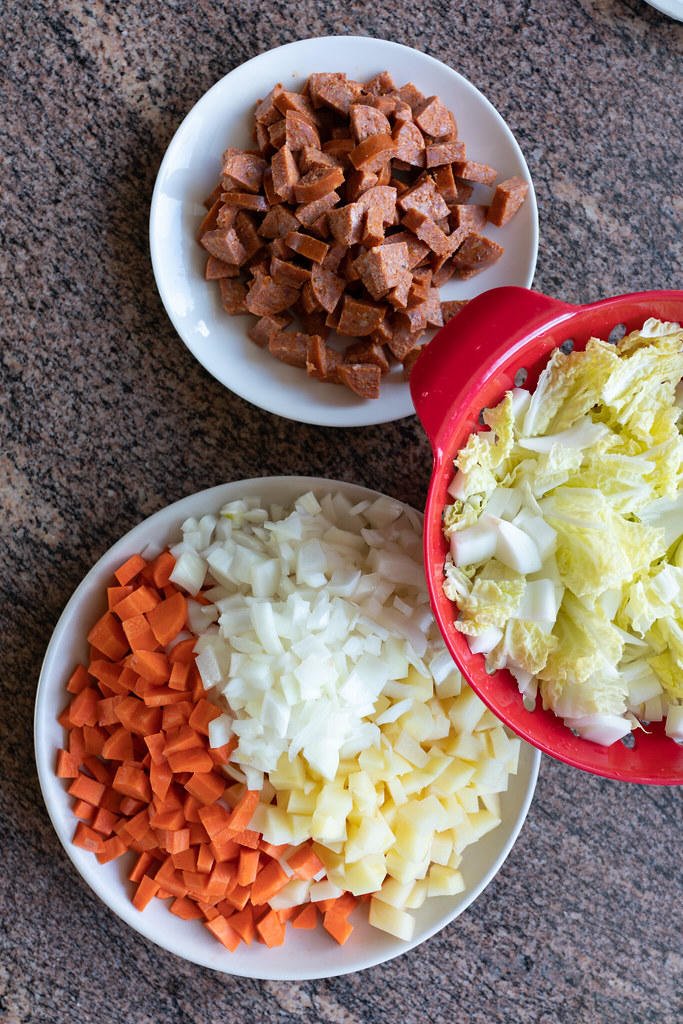 Once you have all the ingredients prepped, we can start cooking:

First, make the ham hock stock: put the ham hocks in a large pot with 2.5 quarts of water. Bring the water to a boil, then turn the heat down to low. Put on a lid on top, and let cook on low for 1.5 hours. 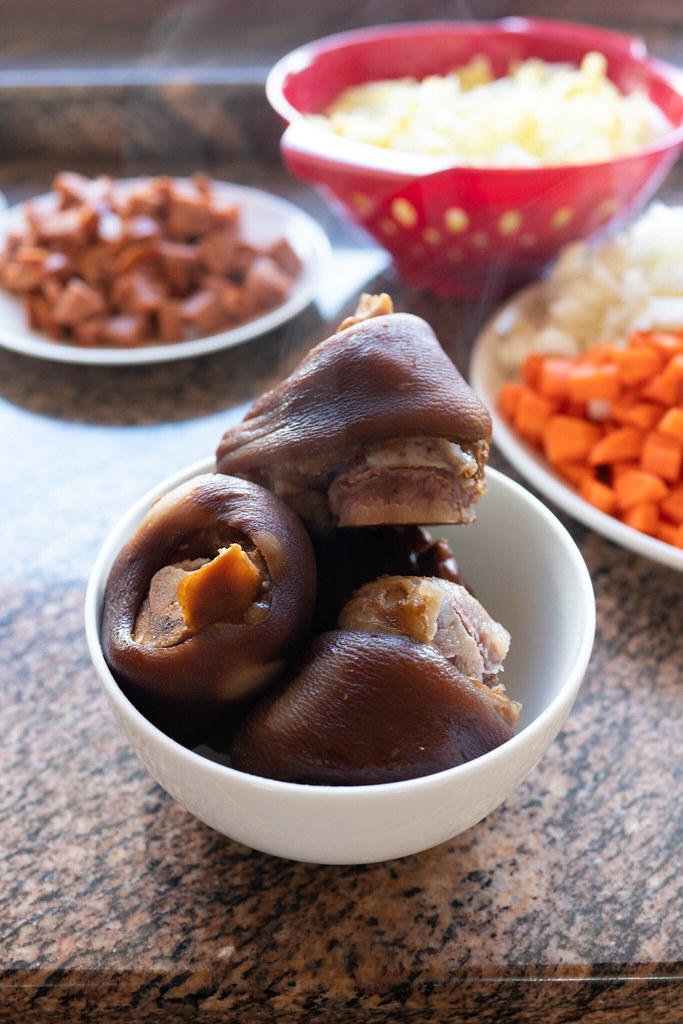 Smoked ham hocks, after boiling in water for 1.5 hours

After 1.5 hours, remove the ham hocks from the pot and place in a bowl (keep the stock on the stove at low heat). Let the ham hocks cool for about 5-10 minutes. You don’t want to burn you fingers, the meat is hot inside. 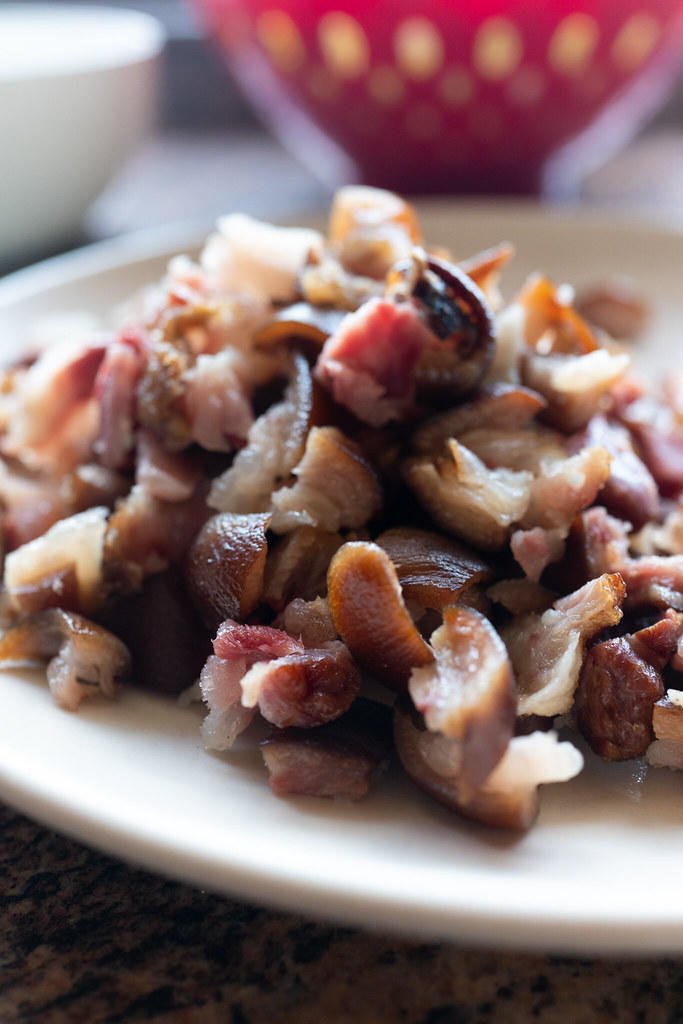 Meat and skin chopped from the boiled, smoked ham hocks. This all goes back into the soup. 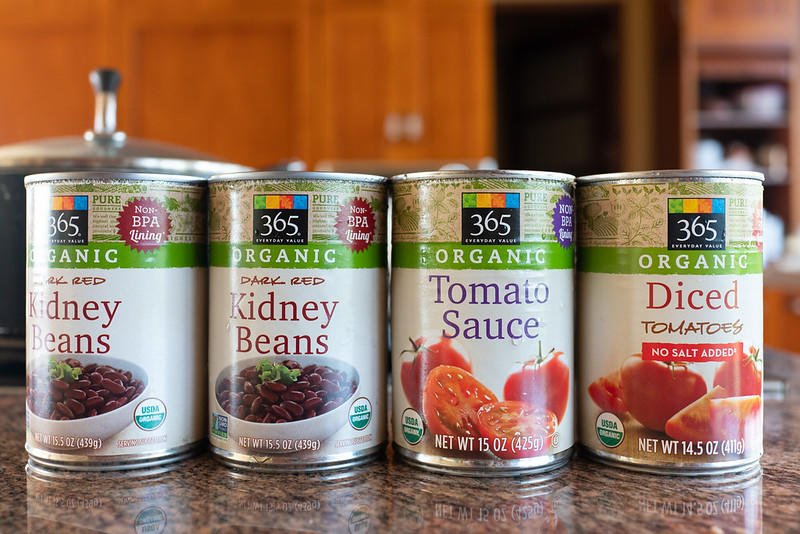 All the canned items you’ll need for Portuguese Bean Soup

Skim the fat off the top of the ham hock stock. Bring the stock back to a boil and add the cans of diced tomatoes and tomato sauce.

Bring the soup back to a boil, and add in the kidney beans, Portuguese sausage, cabbage, and macaroni noodles.

Let the soup cook on medium-low heat for another 30 minutes. Season to taste with salt and lots of pepper. Enjoy!

It's my 4th time making it. So simple, but sooooo good. The cabbage gives the soup such a good crunchy texture. I use the portuguese sausages from Costco. I had to use my biggest pot, since it makes such a big batch. Love the chewy pork skin. Bottom line, it's delicious and so many textures. Thank you for sharing your recipe.

Aloha Caroline! So happy you enjoyed the recipe! We also get our Portuguese sausage from Costco :) - Kathy

Happen to stumble upon your recipe, decided to try it with both ham shanks and ham hocks, didn’t take them out to cut tho, kept them in and light simmered for an additional half hour. I removed the loose bones continued following the recipe. I also used both cabbage and watercress. I received so much thank you’s that I was amazed! Mahalo plenty! This is a keeper!

Hi there! I feel like this may be a dumb question but I'm going to ask anyway 😅. I'm closer to Portugal than I am to Hawaii (I'm in the UK). Is it safe to assume I could go into a Portuguese supermarket around here and ask for linguiça and I'll get the same sausage you are talking about? Or even Lisbon, as I'll be there in a couple of months?

Do you thicken it? If so, what do you use? Thanks!

Hi Kathy! First time making the soup but a big fan of Porto. Bean soup! Do I drain the beans or diced tomatoes before adding or does those juices go into the broth as well?