Home » Hawaii Outside Hawaii » A Taste of Hawaii in San Francisco

A Taste of Hawaii in San Francisco

San Francisco is rich with Hawaii-influenced food. From shave ice to homemade spam and butter mochi, it's easy to find a taste of Hawaii in SF. 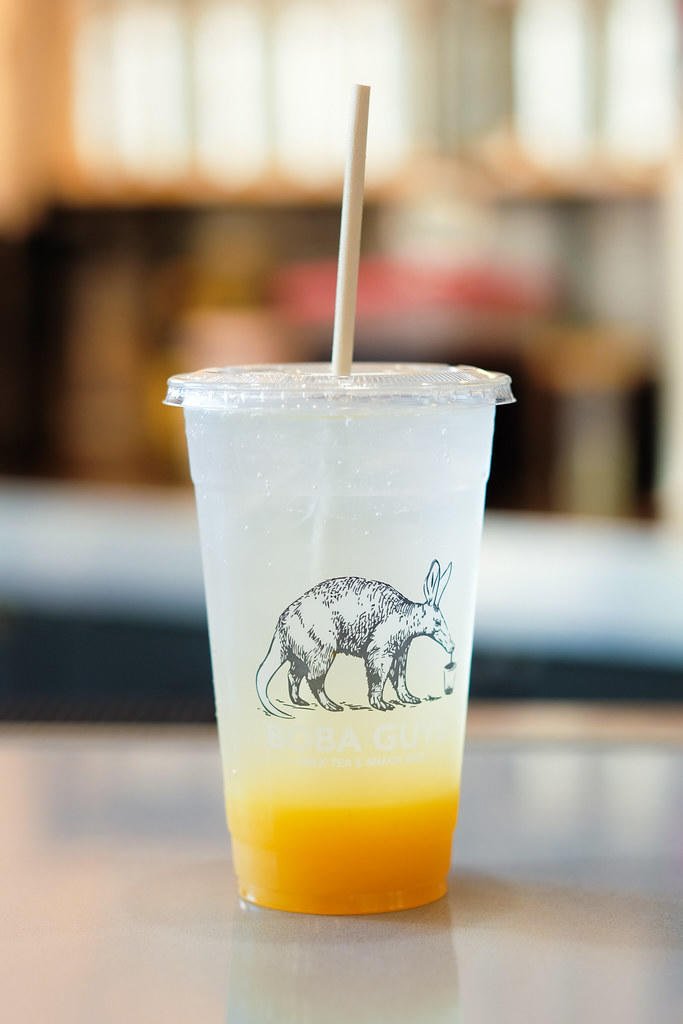 Did you know there are lots of Hawaii people in San Francisco?

A lot of the west coast people are in San Francisco. The appeal is easy to see. The weather is nice, there's good food, and most important...it's only a five-hour flight to Honolulu (it's ten-hours from NYC). There's also lots of Hawaii-inspired food in the city!

Here are a few places to check out: 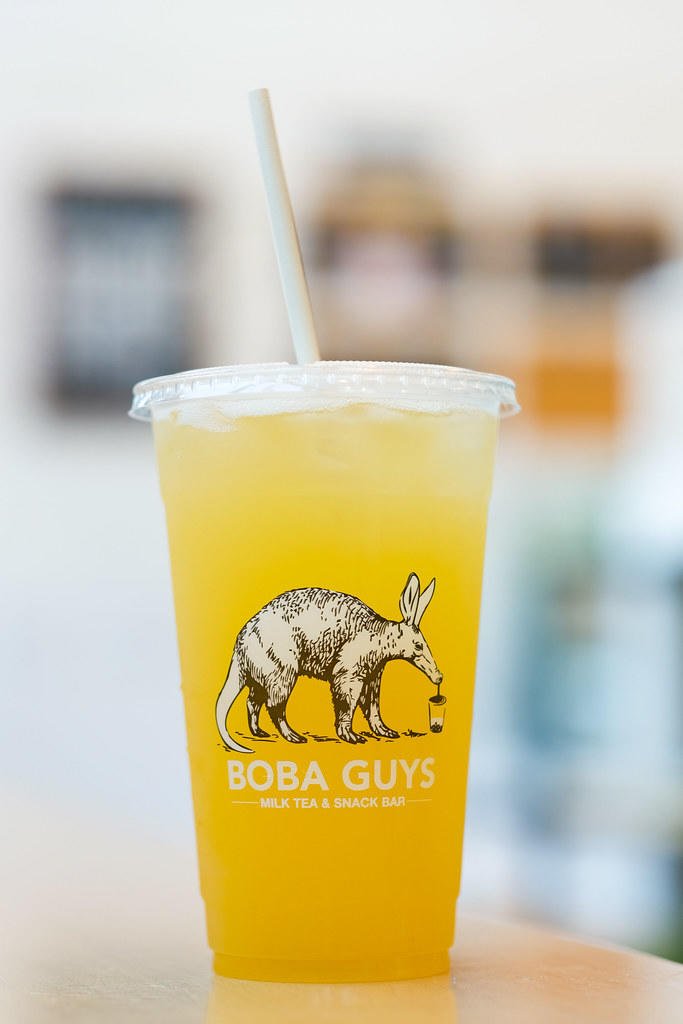 POG is a seasonal drink at Boba Guys (go before they rotate it out ^_^). POG stands for Passion Fruit-Orange-Guava, and Boba Guys makes their version with a homemade marmalade of the three fruits. It's super refreshing and more fruity than sweet. I like it with aloe jelly. Another seasonal drink I love is Ube Halaya which has fresh ube shaken with coconut milk. I like that with homemade boba and almond jelly.

P.S. They recently started making pastries in-house (only at Hayes Valley location for now). My favorite items is the Croissubi...a spam musubi croissant! 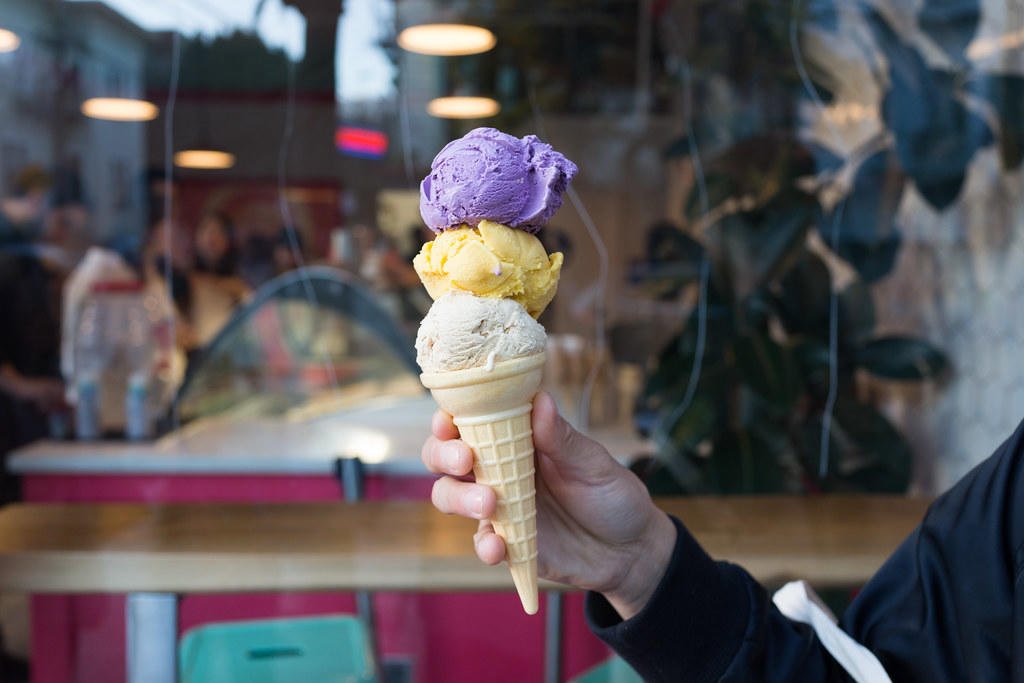 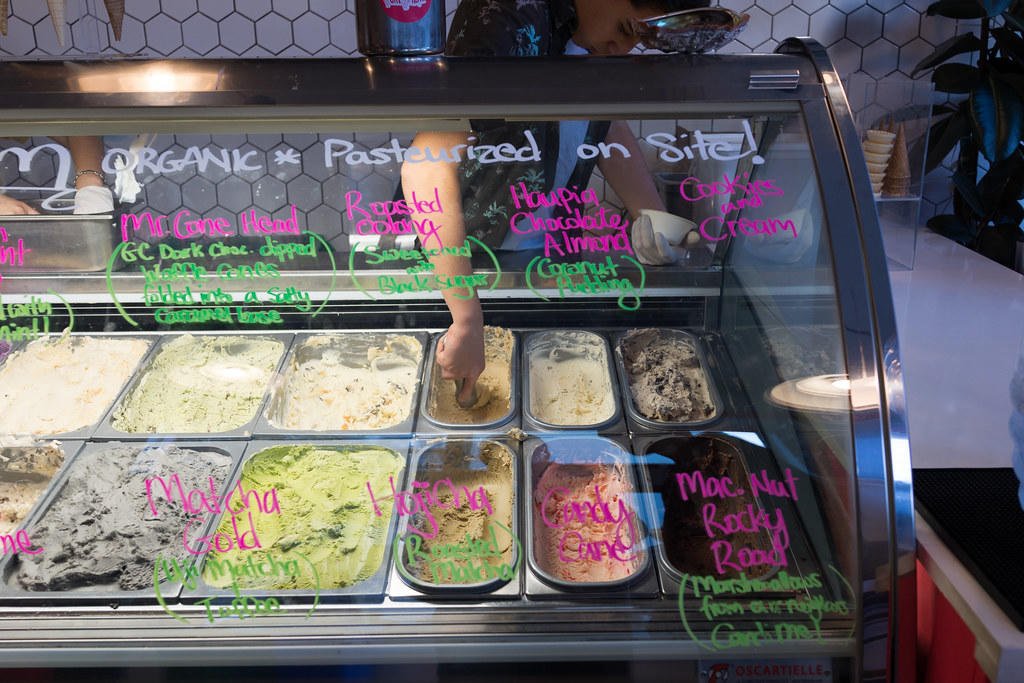 They are generous with samples, and the flavors are all so dreamy. 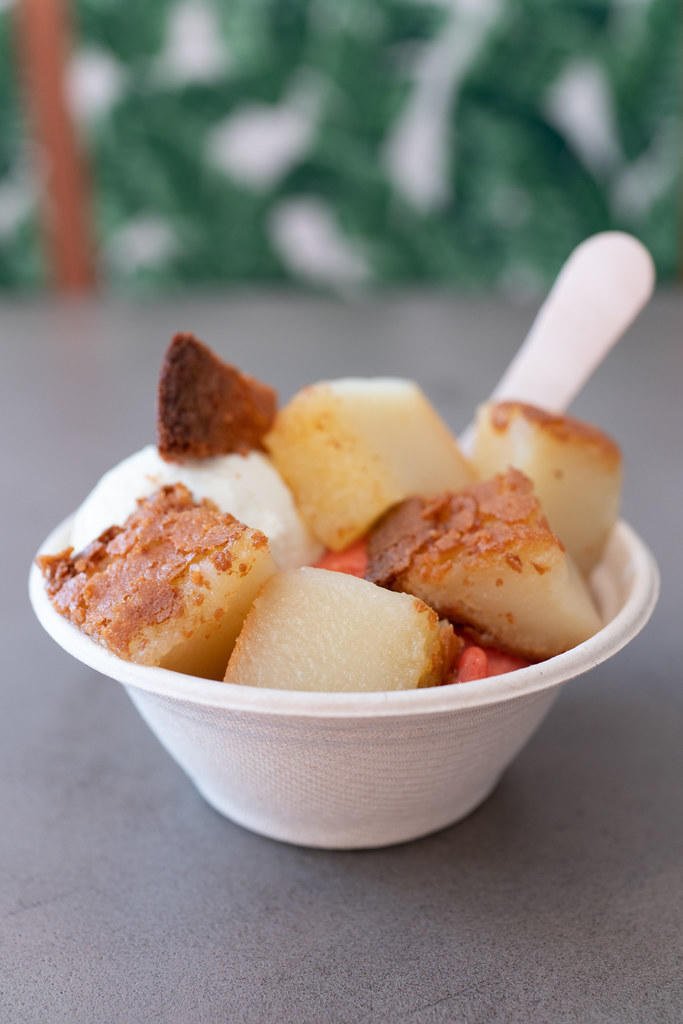 Bonus: one of the topping options are cubes of housemade butter mochi! Pictured above is a scoop each of salted kaya ice cream and guava-li hing mui sorbet with butter mochi (the mochi was still warm from the oven ^_^).

Located in Berkeley, stepping into Tokyo Fish Market feels like you're back in Hawaii! This market feels like a mashup of Honolulu's beloved Marukai and Tamashiro Market. Among the treasures at Tokyo Fish Market: lots of sashimi grade fish (the easy access to sashimi grade fish in markets is one of the things I love most about Hawaii), chili pepper water, saimin noodles, and even frozen lau lau, and kalua pig! They even carry the poke seasoning packets I mentioned in this poke post, many different Hawaiian salts, haupia mix, local juices including POG, and cookies. Man! This place is a real find. 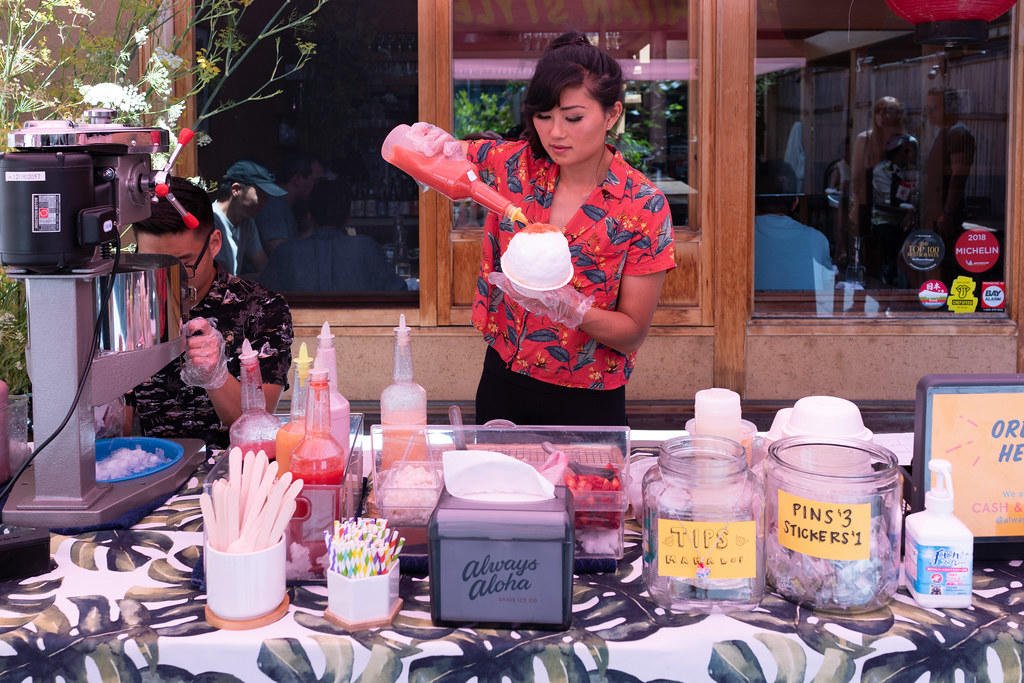 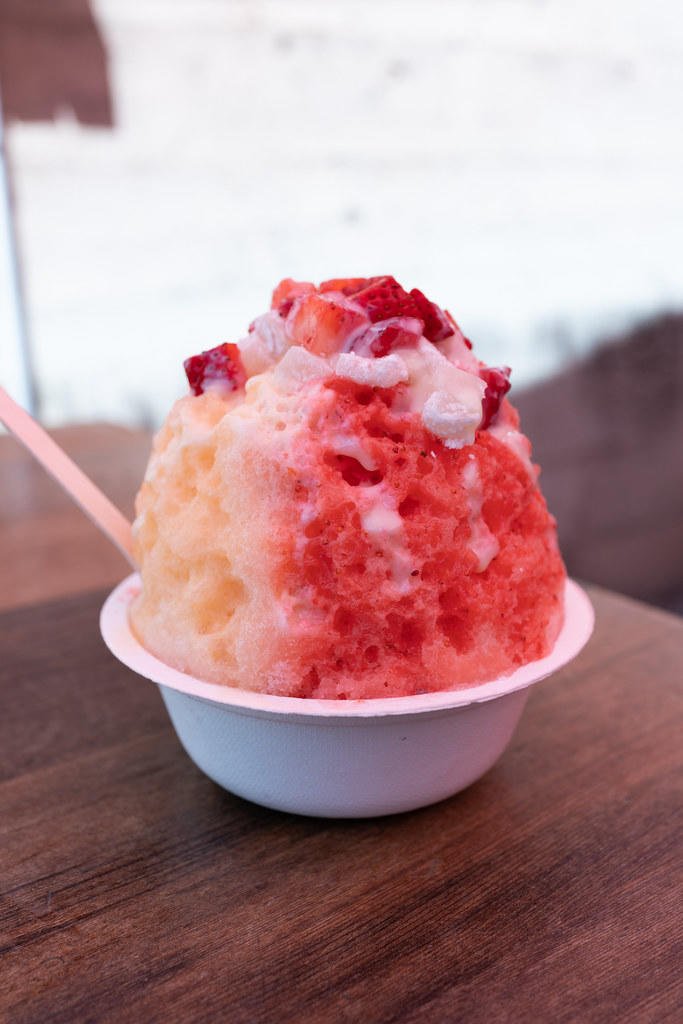 Most recently we had a half strawberry-calpico, half cantaloupe-calpico shave ice. Topped with strawberries, mochi, and a snowcap. Hit the spot. So lucky we can get good shave ice here in SF! 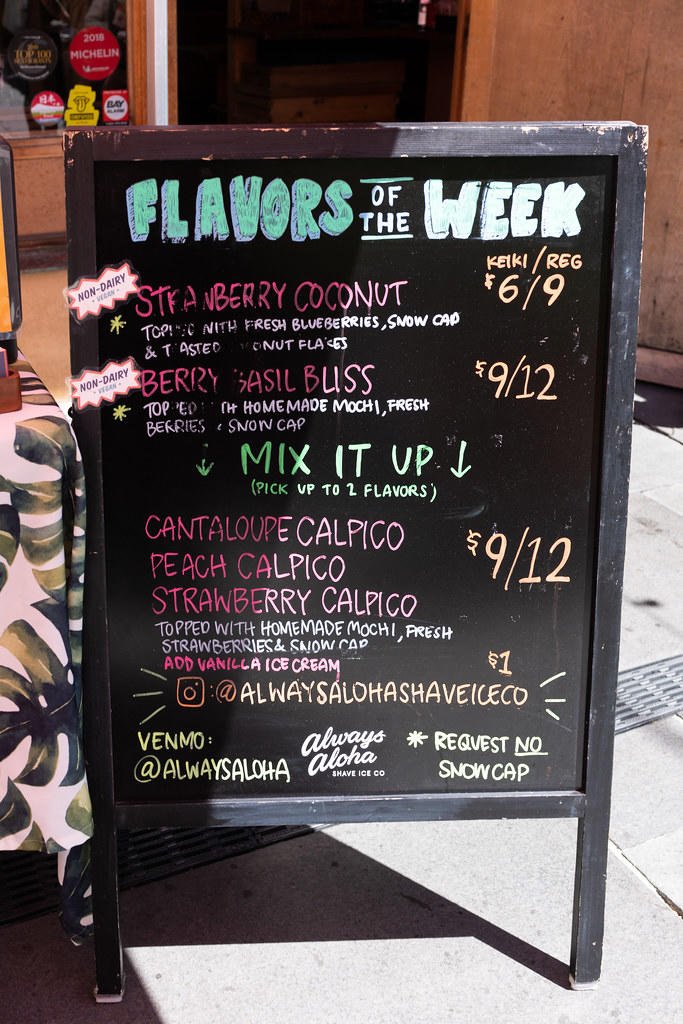 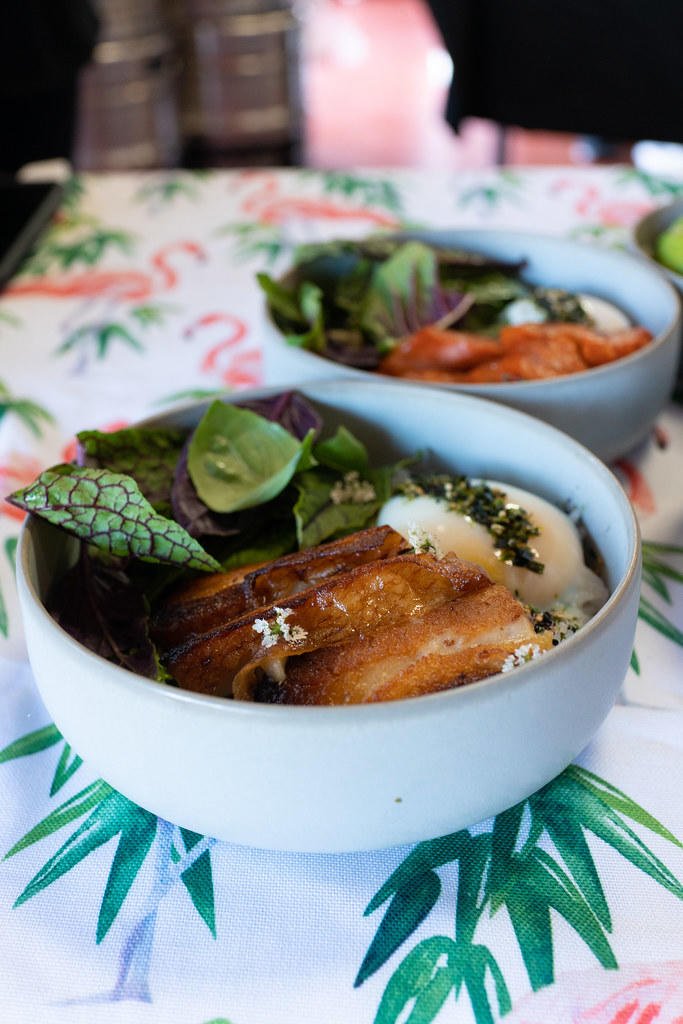 Local plate lunches, done nice. El Chino Grande is a pop-up from Chris Yang (the former chef at 'Aina, a restaurant we loved and will miss!) They change up the menu each week... 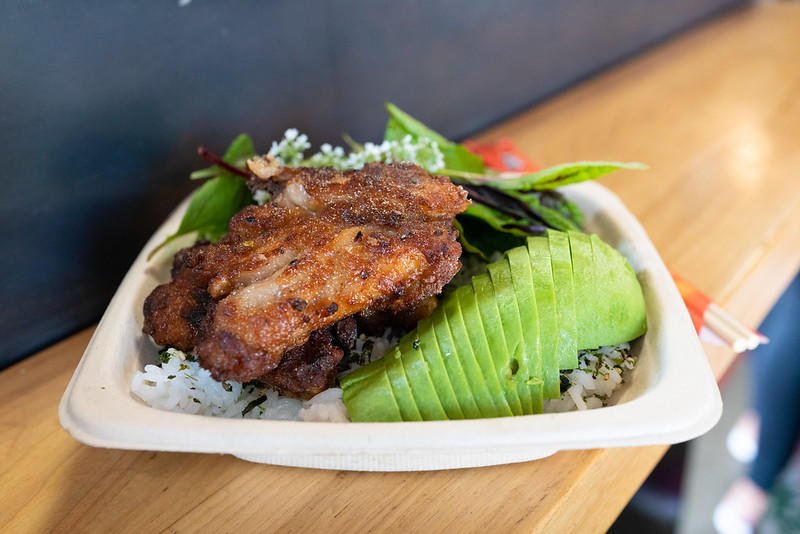 ...I just had a plate with mochiko chicken (I love mochiko chicken!) and real nice avocados. In the back, cucumber and bitter melon pickles! Also, a super good slaw. Rice and lots of furikake on the bottom. Sometimes he'll even make butter mochi and malasadas! Check his Instagram for the next pop-up date/location. 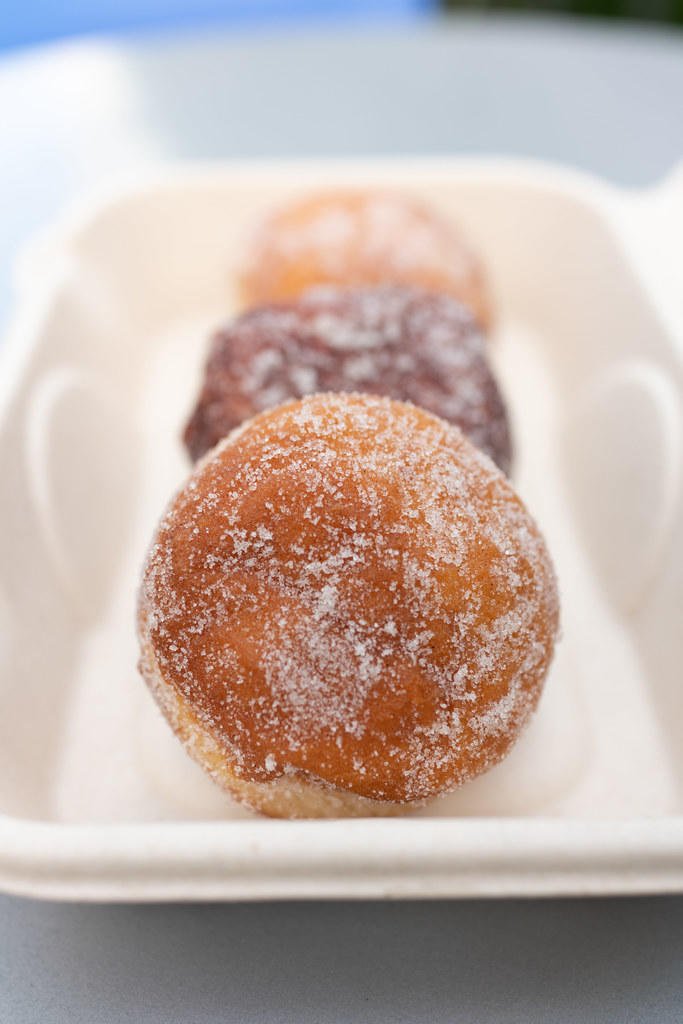 Ocean Malasada makes one thing: malasadas! They have regular and keiki (kid)-size malasadas. They make classic malasadas (sugar-dusted) and many filled flavors including ube, guava, and haupia. For holiday season they introduced a red velvet malasada. Ocean Malasada is a pop-up, so check their Instagram for updates/locations (it's neat when they pop-up at Garden Creamery because then we can get local ice cream flavors and local malasadas at the same time 🙂 ). 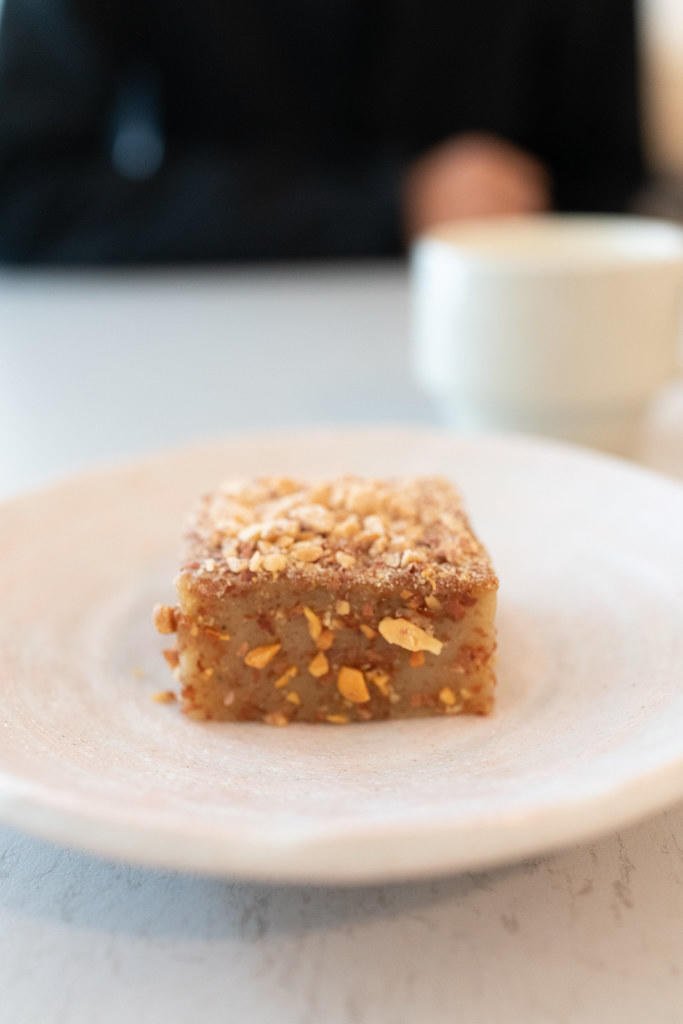 Breadbelly bakes brown butter-butter mochi and tops it with crushed, toasted peanuts. These tiny squares are just the right size for an afternoon treat with a hot drink (that's soy milk with winter melon in the back). 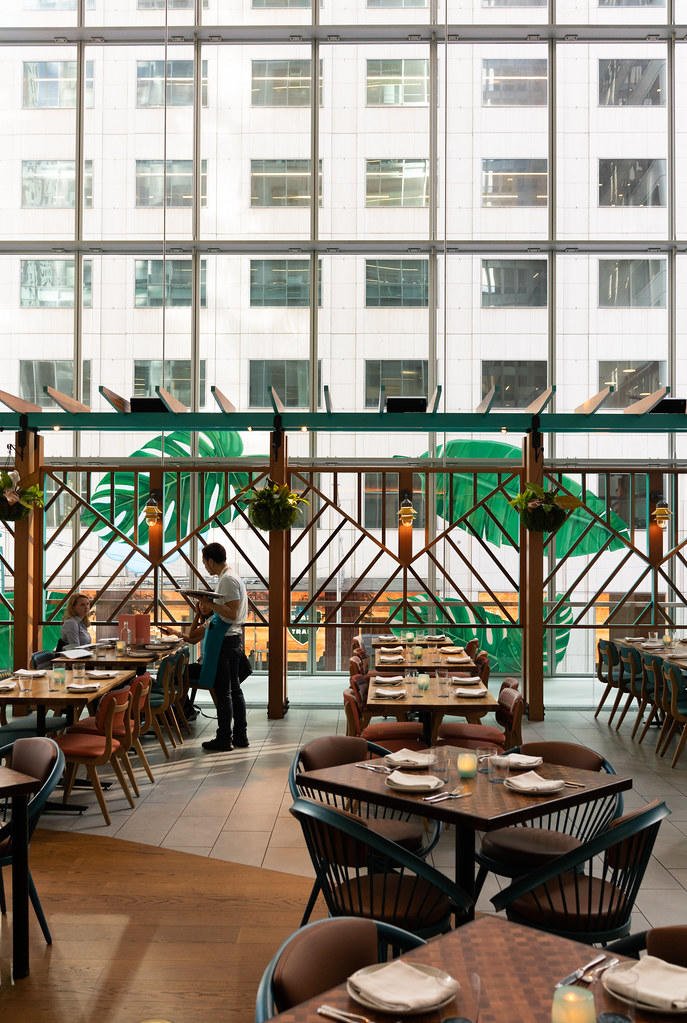 Trailblazer Tavern is a collaboration between Michael Mina and Michelle and Wade of MW Restaurant (one of my favorite restaurants in Honolulu). It's like MW but with an SF twist! They have everything from housemade Spam musubi (which has a mochi-crusted pork arabiki meatloaf) topped with quail eggs, to loco moco and kimchee fried rice. 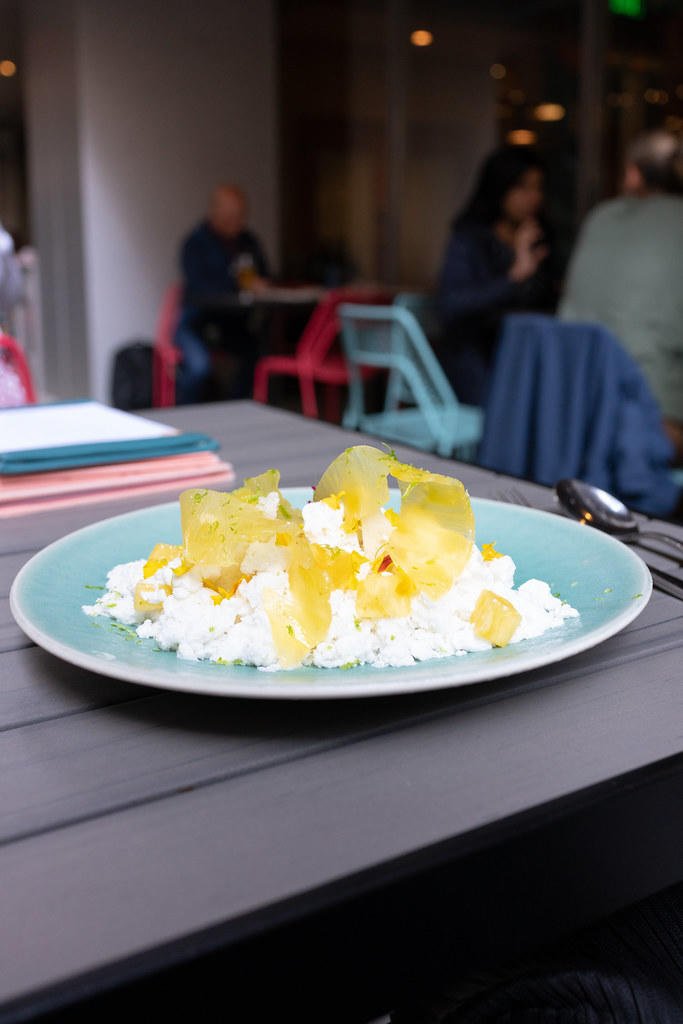 Best part? You can get Michelle's desserts here! My two favorites: 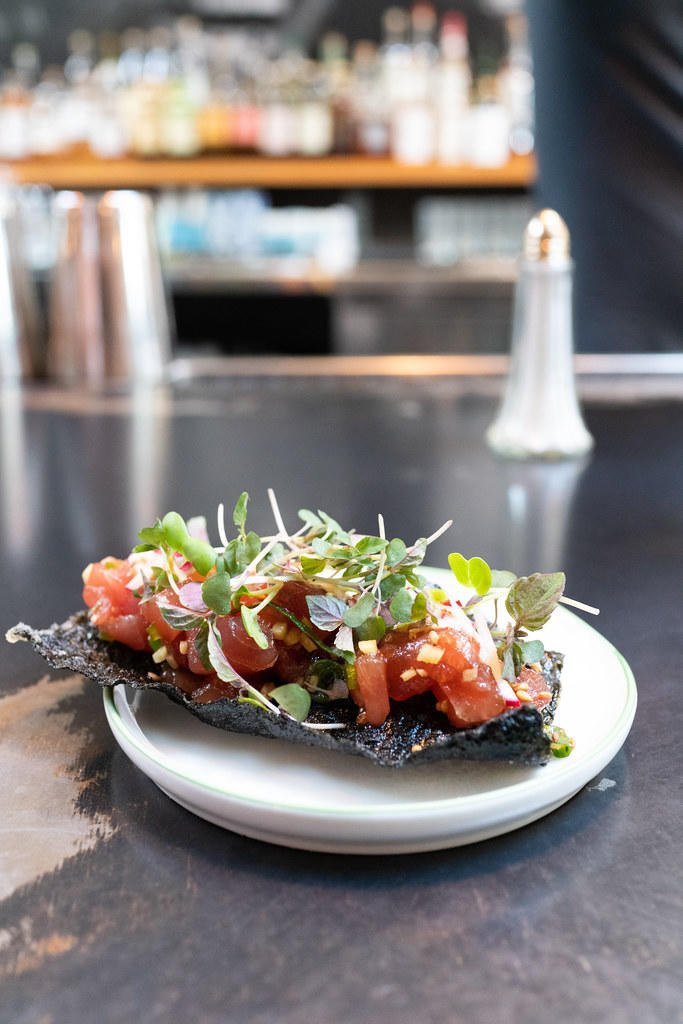 There are lots of Hawaii-inspired dishes all over the menu at Liholiho Yacht Club. You can start with ahi poke over nori crackers and... 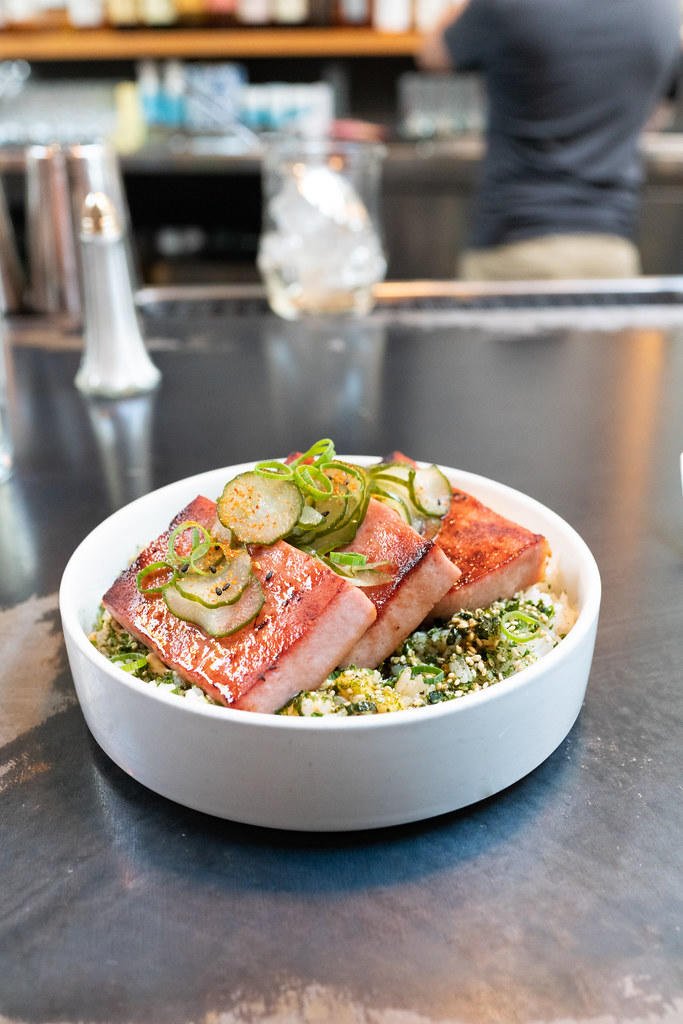 ...the order an off-menu dish of homemade Spam (three fat slices) over rice with furikake and spicy aioli. I think there's also some shoyu mixed in there. 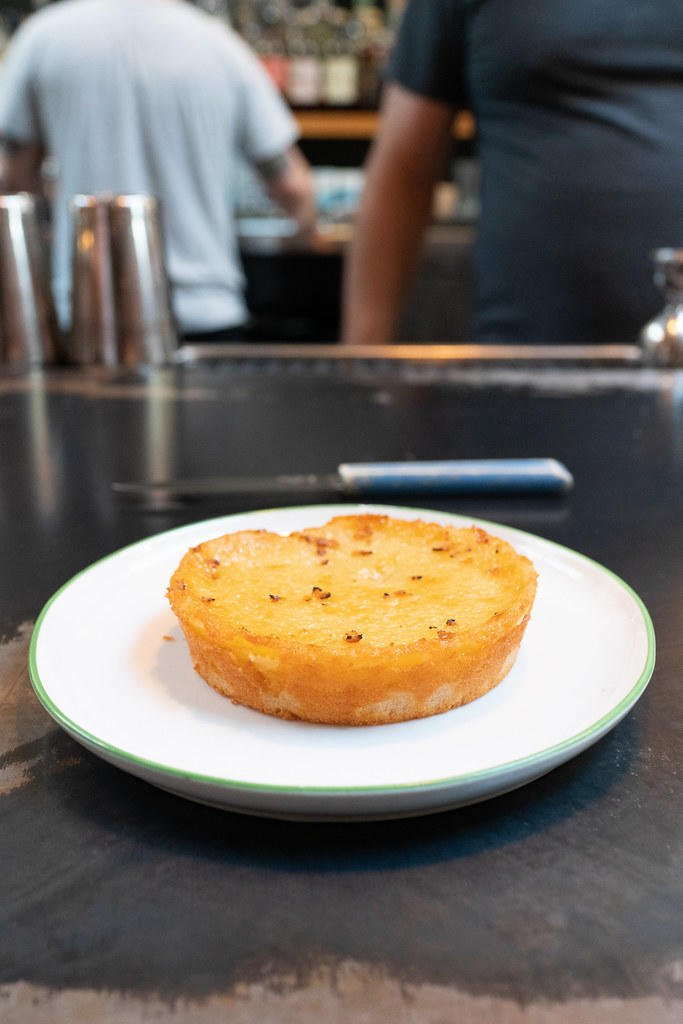 I like going to Liholiho on random weekdays and having dinner at the bar. As for dessert? Get the (also) off-menu coconut butter mochi! It's like the butter mochi we grew up with except there's a bonus layer of coconut custard on top of the butter mochi.

It's baked together so it looks like a whole combo piece of butter mochi bottom/coconut custard top. It's so onolicious ^_^ 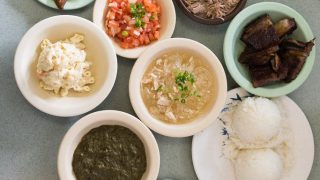 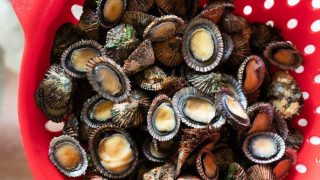 Next →
Opihi, The Hawaiian Limpet
Mahalo for Reading!Click here to cancel reply.

Have you been to Takahashi Market in San Mateo? They fly in some Hawaii products and I like their mochiko chicken and bacon Spam musubi a lot!

Hi Jeanne! Takahashi is high on my to-visit list! I've always heard great things...will be sure to try the mochiko chicken and musubi when I go. Thank you for the tips ^-^ - Kathy

Saw your IG story and was wondering what your opinion of Always Aloha was - haven't been able to try yet. My brother also said it was good. We are very picky about these things having been spoiled by growing up w/Waiola - so good to hear it's solid. Shave ice

I must say, I went to Trailblazer Tavern for my birthday this year, and for some reason it just sort of missed the mark for me. I did enjoy Michelle's desserts though. Really novel "If Can, Can" cocktail in Spam can, that was fun!

I never got to try 'Aina! Had made a chef's counter reservation for last November for my wife's birthday, but got a call from them and they told me the chef was out of town at another cooking event. Was planning to eventually go, but then they had an emergency and eventually closed up shop altogether. Bummed that I never got the chance.

Hi Brent! I really enjoyed Always Aloha Shave Ice! I went to their pop-up at Rintaro the other weekend. The owners are so sweet, they are doing a good thing! Most of their pop-ups are in the East Bay...I hope to visit those soon as well.

We were so bummed about 'Aina closing, but happy that this new pop-up is up and running ^_^