This post includes affiliate links. We may earn a small commission (at no cost to you), if you purchase through these links.
Jump to Recipe

Japanese pickled cucumbers are fast and easy to make. You just need salt, sugar, rice vinegar, and cucumber! A refreshing, bright side dish.

Hooray for Japanese Pickled Cucumbers! These are the easiest pickles you'll ever make (and perhaps one of the most delicious).

You just slice, salt, and then marinate the cucumbers in a mixture of sugar and rice vinegar. That's it!

It's wonderful and refreshing. In Hawaii, this dish is also called cucumber namasu. You'll find these pickled cucumbers at most Japanese restaurants around Hawaii and bento shops (often sold as one of the many components in the a bento) or a standalone side dish (alongside other vegetables like Hijiki Salad).

This is meant to be served as a side dish, but I often end up snacking on the cucumbers plain. I'm not crazy about raw cucumbers, but I love these pickled cucumbers.

All you need are four ingredients for this recipe. One cucumber and three pantry items!

This recipe is super simple.

Wash and cut the cucumber. Cut it thin. How thin? That's up to you. Use a mandolin and go super thin. Or use a knife and go as thin as you can. I usually end up slicing the cucumber into ⅛-inch thick slices.

Some people prefer the cucumber slices thicker, others like it thinner. There's no real right or wrong. Also: do the best you can but don't stress about trying to make perfect or even slices.

Second step is to salt the cucumbers. Just place the sliced cucumbers in a bowl and sprinkle salt on top. Mix it gently and then let sit for 10 minutes.

The salt will help draw water out from the cucumber (so you can get a crunchier pickled cucumber). Drain out the water after 10 minutes.

Then in another, smaller bowl, dissolve the sugar into the rice vinegar. Pour that mixture over the salted cucumbers. Mix gently with a spoon. Cover and place it the refrigerator for an hour to let it "pickle."

Take it out after an hour. Eat and enjoy! If you want it more pickle-y, just marinate for longer. So easy, so ono ^_^

We serve the cucumbers chilled and as a side dish to our meals.

A simple lunch/dinner at home would include:

These cucumbers go well with many Japanese dishes including:

It also pairs well with local-Japanese dishes. FYI: "local-Japanese" dishes are like a hybrid of traditional Japanese dishes and local Hawaii sensibilities. (Learn about how all cuisines get "Hawaii-ized" when they come to Hawaii in this post.)

Examples of local-Japanese dishes include:

How long do these cucumbers keep?

3-4 days in the refrigerator, in a sealed container.

How long are you supposed to marinate the cucumbers in the vinegar?

The cucumbers will be ready to eat after an hour in the fridge, but you can marinate/pickle them longer if you'd like. If you cut the cucumbers on the thicker side, you might want to increase marination time to 2-3 hours.

We just serve these cucumbers plain in a bowl. But sometimes it's nice to sprinkle roasted white sesame seeds on top just before serving. A small and thoughtful touch ^_^ 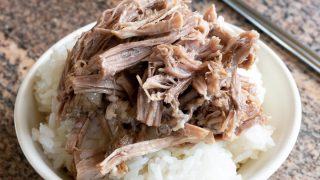 How much would i need to make for a large crowd like 80 people?

I think you are supposed to rinse salt. All other recipes say to do so.

Aloha Terry - A lot of the salt comes out when you drain the water in Step 2. Hope this is helpful :) - Kathy

We made your noodle recipe tonight with Roast Duck. Oh my, very ono! Mahalo!

Aloha Dorothy - So happy you enjoyed! Thank you for the kind words ^_^ - Kathy

Oh yeah, I forgot to add that my lazy man's namasu also has wakame in it. I just buy the cheap dry stuff from the Asian market, rehydrate it, cut it into pieces and add it to my namasu!

Ooo that's a good idea! Another friend's mom adds little clams into her namasu...also on my list to try!

Yup; another great recipe. If you just add slivers of shoga, this dish becomes the lazy man's namasu! I do that all the time. Another simple variation is to just slice up the cucumbers and put them in a bottle with shoyu and chili pepper -- Hawaiian chili peppers if you got them. I usually just just a quart mayonnaise jar and put the slices of cucumbers in the jar. Then I add maybe 1/4 ways full of shoyu and the chili peppers. Every half a day, I turn the jar over to let the cukes on the other side soak up the shiru. If you use too much shoyu, the become too salty and hard to eat.

Hi Alan! Ooo man, cucumbers with shoyu and chili peppers sound so perfect. Will be sure to try this out, thank you for sharing! :) - Kathy

Oh yeah, I forgot to add that my lazy man's namasu also has wakame in it. I just buy the cheap dry stuff from the Asian market, rehydrate it, cut it into pieces and add it to my namasu!