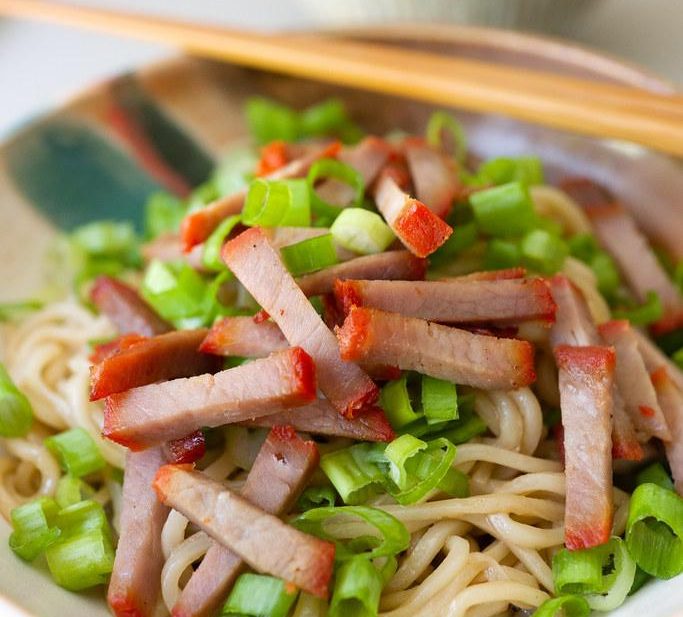 Dry Mein is a Hawaii dish of noodles tossed with a savory sauce. It’s similar to Chinese lo mein, but Hawaii-style. Here’s where dry mein came from, where to eat it, and how to make it!

What Is Dry Mein?

Dry Mein an onolicious Hawaii noodle dish. It’s made by boiling saimin noodles and then quickly tossing the noodles in a savory sauce. The noodles are topped with items like char siu, bean sprouts, and green onions. It’s then served with a small bowl of chicken broth on the side. Don’t forget a dab of Chinese hot mustard for dipping ^_^

This dish was invented by a Chinese cook working at the Maui noodle restaurant called Sam Sato’s (more about Sam Sato’s near the bottom of this post).

Dry mein is quite similar to Chinese lo mein. For both dishes, the noodles are boiled, drained, and then tossed with a sauce.

Dry mein is made from saimin noodles. Samin noodles the “main” noodle that we eat in Hawaii. It’s a soft wavy noodle made from both wheat and egg. (Ramen noodles are made from wheat but does not include eggs).

Saimin noodles can be found at any supermarket in Hawaii (you can even visit the Sun Noodle factory in Honolulu for a fresh batch or extra big order of saimin noodles). On the mainland, you can often find frozen saimin noodles at Japanese supermarkets. If you can’t get saimin noodles, feel free to substitute with ramen noodles.

More details about saimin noodles are in this post.

We love to eat noodles in Hawaii! In addition to dry mein, make sure to also check out:

Topping options are plenty when it comes to dry mein. The “classic trio” is char siu, bean sprouts, and green onion, but you can really do it how you like.

This nice part about Dry Mein is that you can use almost any kind topping you have. You can even go all vegetarian and do tofu and beansprouts (I’ve made it this way for my grandma before). It’s also a great way to also use any leftovers because dry mein makes everything extra onolicious.

The sauce is the most important part of the dish. We toss this sauce with the hot noodles and it’s the main seasoning/flavor of the dish.

For each serving of noodles, I use:

Everyone has their own “secret” sauce recipe, so feel free to tweak the sauce ratio and ingredients as you like. Sometimes I also add in a splash of sesame oil!

Dry mein is always served with a cup of broth on the side. If you already some chicken broth in the fridge, you are lucky. Heat the broth up and add in half the saimin seasoning packet.

If you don’t have chicken broth ready in the fridge (I usually do not), I put a teaspoon of this chicken bouillon and half the saimin seasoning packet into a small bowl. I boil water in my kettle and then pour cup the boiling water into the bowl. Stir and mix with a spoon then top with chopped green onions (just the white part) and black pepper.

How To Eat Dry Mein

Oh boy! There are multiple ways, and no one is wrong. Here are the options:

Where To Eat Dry Mein

In addition to making dry mein at home, you should definitely visit Maui and eat at Sam Sato’s.

Sam Sato’s is a classic Hawaii noodle restaurant that’s been around since 1933! They aren’t many places like this left, we must treasure and appreciate them. Dry mein is the must-order dish (it’s on the menu as “Dry Noodles”). It’s topped with char siu, bean sprouts, and green onions. Comes with the broth on the side. I also like to get a beef stick or cheeseburger to accompany if I’m extra hungry (or can split with a friend).

No worries, you can substitute ramen noodles.

Sometimes we make a giant batch of dry mein so that we can have leftovers for lunch the next day. Leftovers reheat easily in the microwave. Or you can do it in a saucepan with a tiny bit of oil.

Oh yes! Chinese hot mustard is a must. Just put a dab on the rim of your dry mein bowl and use as needed. This dish is also great with a splash of chili pepper water.

Using a noodle that doesn’t come with a seasoning packet?