August 29, 2020: Oatcakes update! Oatcakes are no longer available at Starbucks or Costco. They may now be purchased at all 7-11 Hawaii Oahu locations starting September 1, 2020. Oatcakes are $2.09 each.

Oatcakes may also be purchased direct from the baker, Honolulu Baking Co. Here's how:

This is the tale (or should we say saga?) of the beloved Oatcakes from Starbucks / Costco / Honolulu Baking Co. The legend is real. And delicious. 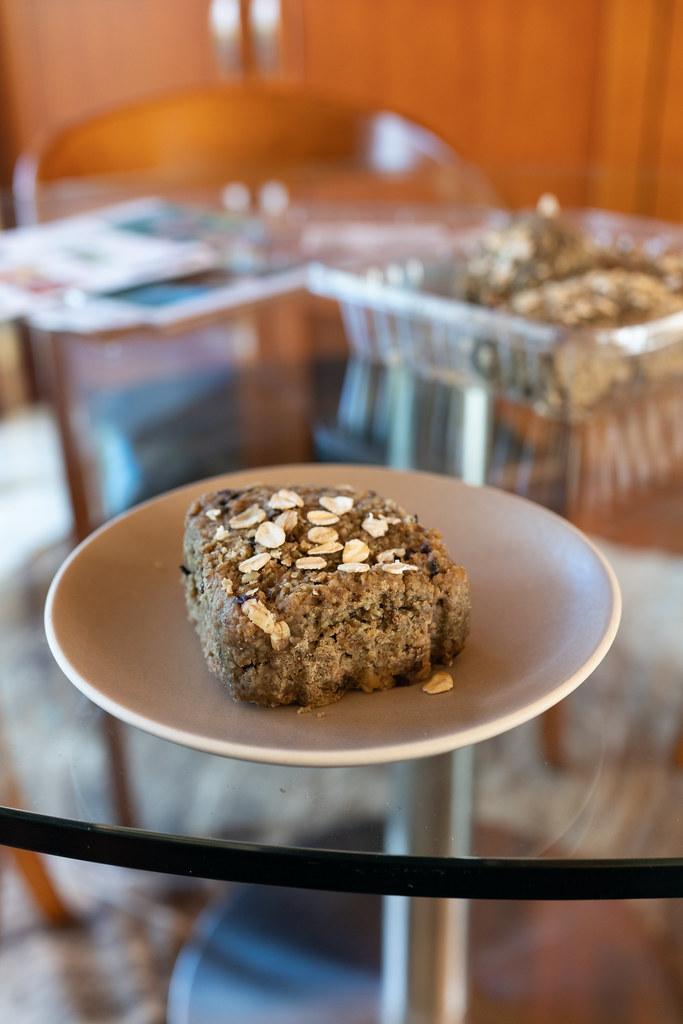 Starbucks Oatcakes were a thing in Hawaii. For a long time, since mid-1990s.

After school, my friends and I often walked to Starbucks Manoa. We'd split a Frappuccino and each get our own Oatcake. When I went on a trip, we'd visit Starbucks on the way to the airport and get an Oatcake to tuck in my backpack. For just in case I got hungry... 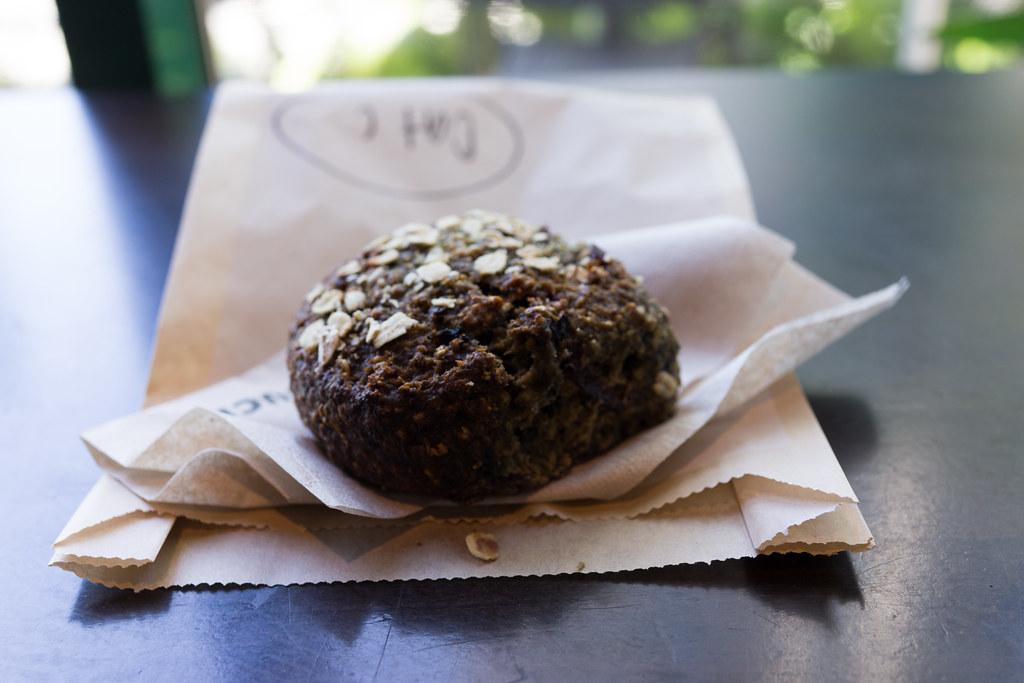 The Oatcakes were brown, round, and study. They didn't look like much (they were actually pretty unattractive), but they were delicious. It's one of those if you know, you know things. You know??

Those who didn't know really had no idea. What. You eat pastries at Starbucks?? When there's a ton of other amazing local bakeries? You go to Starbucks?

But it wasn't about all the pastries. It was only about the Oatcake. Not many people wrote about these Oatcakes on the internet. Except on my old blog. Because there wasn't much out there about the Oatcakes, anyone who googled them wound up at the blog. If you search for something so specific, you must really be interested in them. So I got a TON of emails from Oatcakes loyalists over the past many years. We were a private Oatcake fan club and I felt like the leader lol. And I'm here today with an update!

But let's start at the beginning. 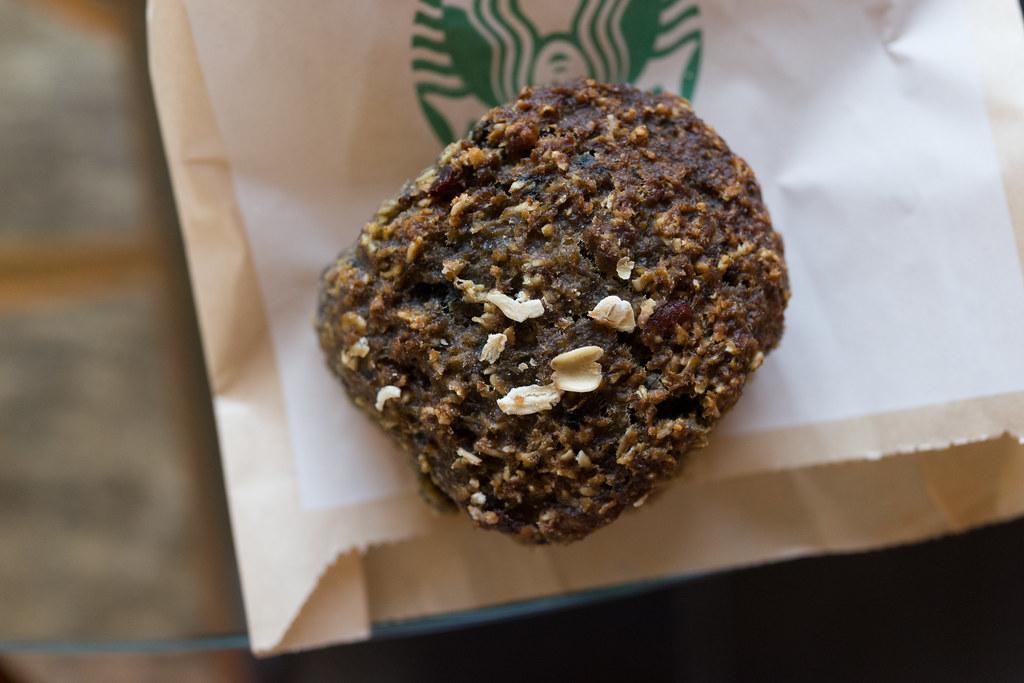 My first post about the Starbucks oatcake was on August 31, 2006. This is what is said:

The Starbucks Oatcake. Only found in Hawaii. And not even all of Hawaii. Only on the island of Oahu. Kinda neato, eh? I was introduced to these mysteriously ugly brown rounds by my friend Noelle. She would bring them into our high school newspaper office every so often and munch on them for breakfast/lunch/snack, or whatevers. I was intrigued. It took quite a while to eat, those heavy monsters. And they weren’t very attractive at all.

Then one day, out of sheer curiosity more than anything…I bought one. $2.25. Weightwise, I felt as if I were carrying 3 or 4 of their scones. I pulled it out and inspected it. Ugly. Moldy appearance. Hard. I couldn’t wait to dig in 🙂

And you know what? These things are awesome! Close your eyes and eat. Eat bit pulled off (I wouldn’t suggest biting a piece off with your mouth) is a bit chewy with the faintest taste of honey. Lots of nutty oats and the occasional bit of blueberry, but more often, dried cranberries. Blended with ground walnuts, it’s not too sweet yet satisfies my dessert and lunch craving. And at 500 calories a piece, you bet it’s a lunch! So add this on you list of excuses to come visit our little island: I need to go to Starbucks. And please don’t turn your nose up high. I like Starbucks. Besides, the oatcakes aren’t shipped over from some random place but are baked by our very own local Honolulu Baking Co.

And make sure to visit early as they sell out fast – islanders are addicted to these Hawaiian Hockeypucks. Here’s comment posted by “MR” on the Starbucks Gossip post on the general crappiness of Starbucks pastries, “The only Starbucks that has good pastries are the ones in Hawaii. Why? They use local vendors. That’s what all of them should do! They have a killer oatcake!” Indeed. Why in fact, it’s caused quite a bit of experimenting on the part of Hawaii’s newspapers and local homecooks more than once. But after reading the recipe, I think I’ll stick with purchasing them!

In 2006 I made a post about the Oatcakes that you can find only at the Hawaii locations of Starbucks. They are wonderful. A few things about these oatcakes (and why pastries at Hawaii Starbucks are much better than those on the mainland):

I recently received an email from a reader, Ken. He had fallen for the oatcake (no one can resist the charms of this oatcake) and emailed Honolulu Baking Co. for the recipe. And they gave it out, just like that! Ken was thoughtful enough to email me the recipe (thank you, Ken!). I thought we’d share it with you ^-^

I originally posted about Hawaii Starbucks Oatcake in 2006, and then again in 2010. Over a decade later, this post remains one of the most popular posts on the blog. I would have never expected that! But it’s pretty cool. And fun. I still eat Oatcakes often when I am home in Hawaii (some habits never change). A few updates I want to note:

Hi, everyone. Some upsetting news today. Thank you so much to Robert from Mililani for the below email:

“Last week I went into Starbucks to purchase my oat cake only to learn that it had been replaced with a lame substitute from the Mainland… not EVEN close.

I agree it is a very, very sad day. And I have no idea why Starbucks would do this. I’ve been eating these oatcakes since middle school time and it breaks my heart that we won’t be able to get them anymore. They were the main reason I went to Starbucks. And they were SO delicious. I’ll ask around and see if Honolulu Baking Co. might be able to share recipe now given the situation.

A second update (and good news). Thanks to Robert from Mililani!

“I also spoke with a very kind lady at the Honolulu Baking Company who said that she will be offering the oat cakes at Costco in packs of six (6). She added that they freeze well for up to a month.”

Well first off, THANK YOU again to Robert from Mililani. I knew we could count on our private oatcakes fan club!

Second, I got to Costco as fast as I could. Meanwhile, the news was breaking everywhere! The local newspaper, local IG accounts, local news, etc. 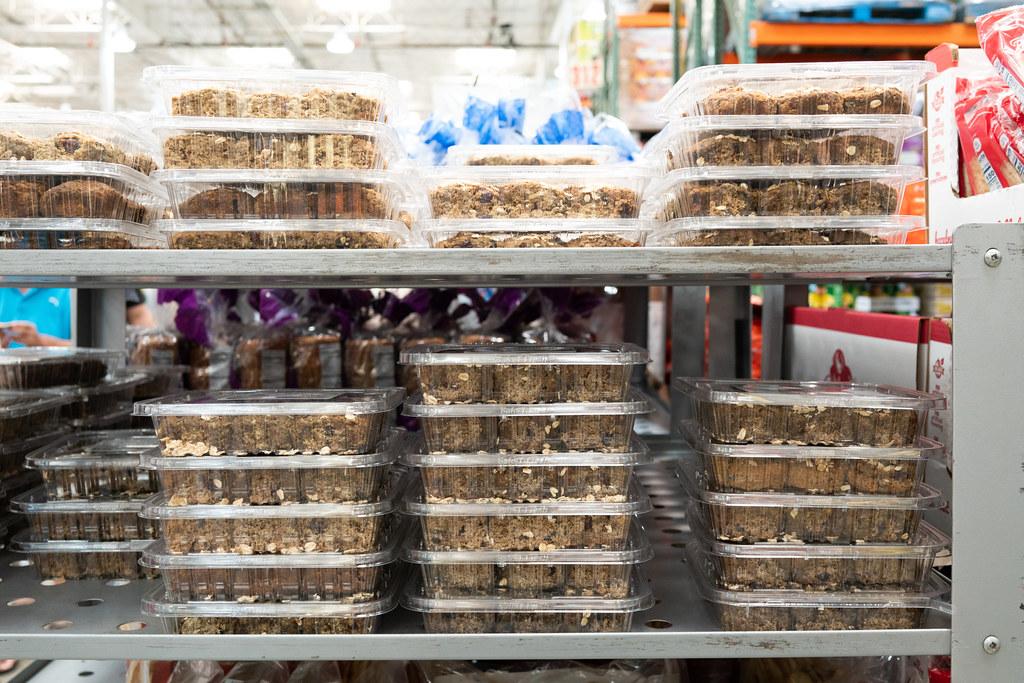 Here we are at the Iwilei Costco. Oatcakes galore! They have Oatcakes available at all Costco locations on Oahu (I'm not sure about the neighbor islands.) 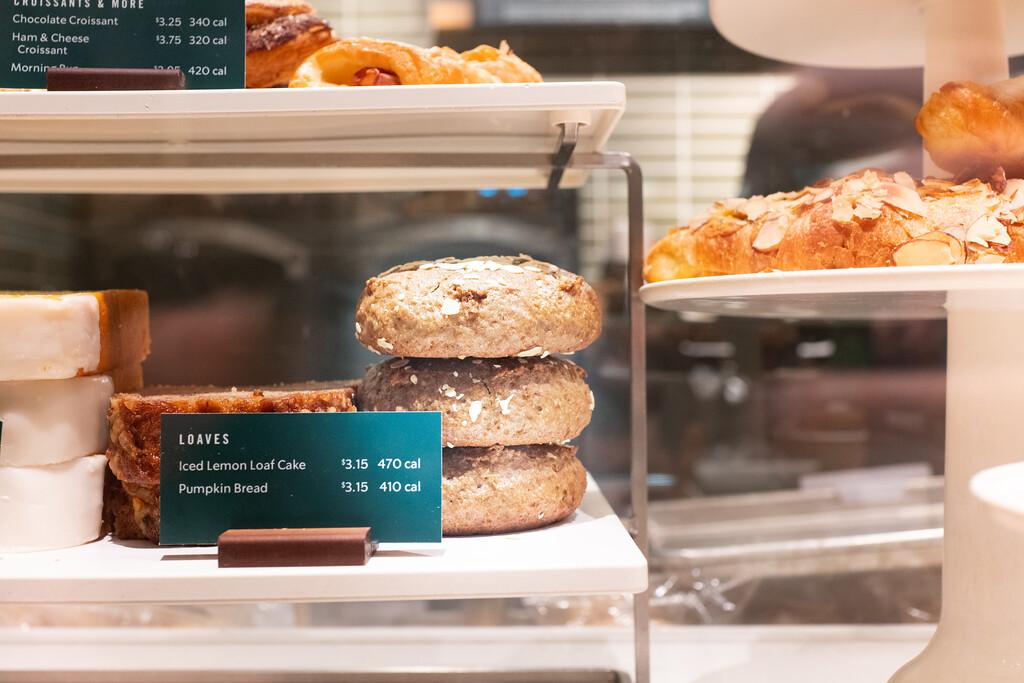 I also stopped by Starbucks Kahala to look at the new mainland oatcake substitute. They look oddly smooth and strange. 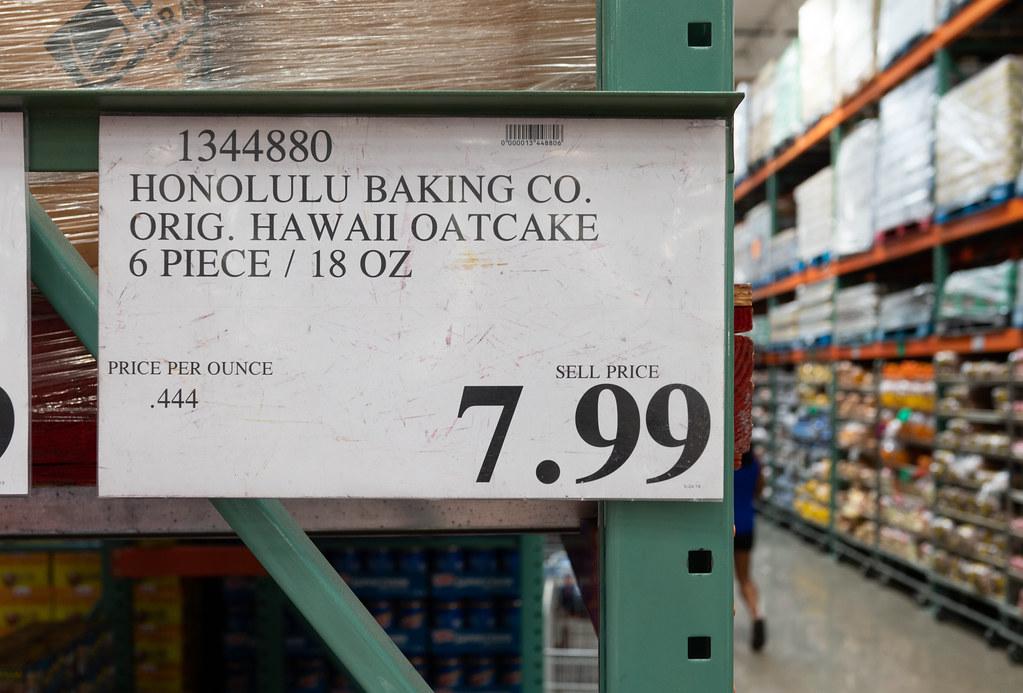 Back to Costco. Ok so the Oatcakes are sold in 6-pack for $7.99. (They used to be about $3.95 each at Starbucks.) So this is a deal. BUT these Costco ones are much smaller, maybe about 60% the size of the originals? No complaints though. 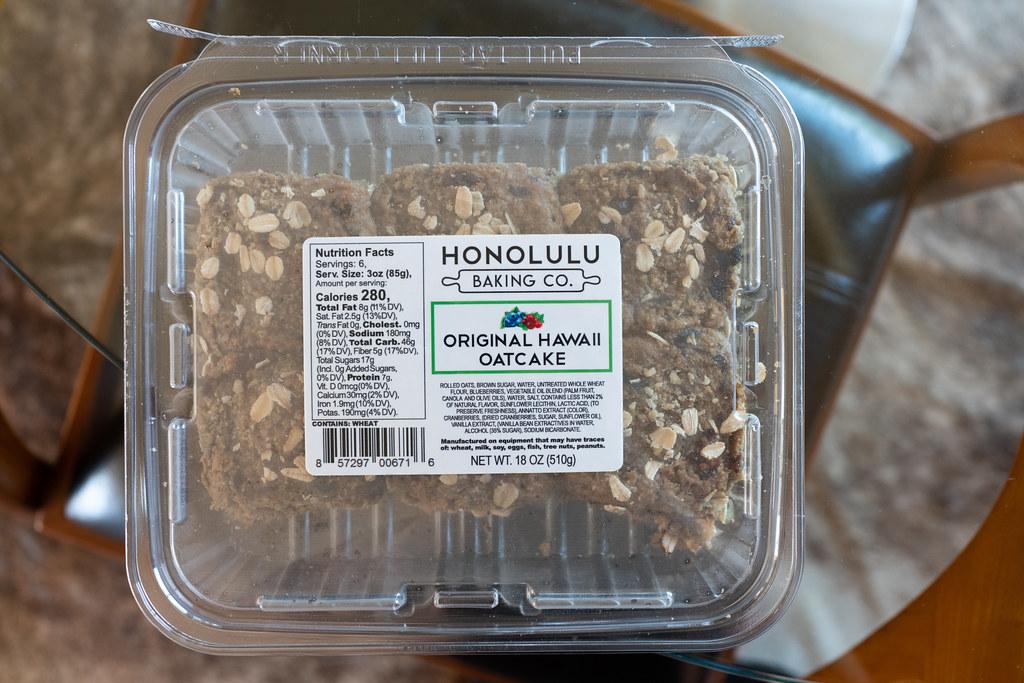 Better look at the packaging... 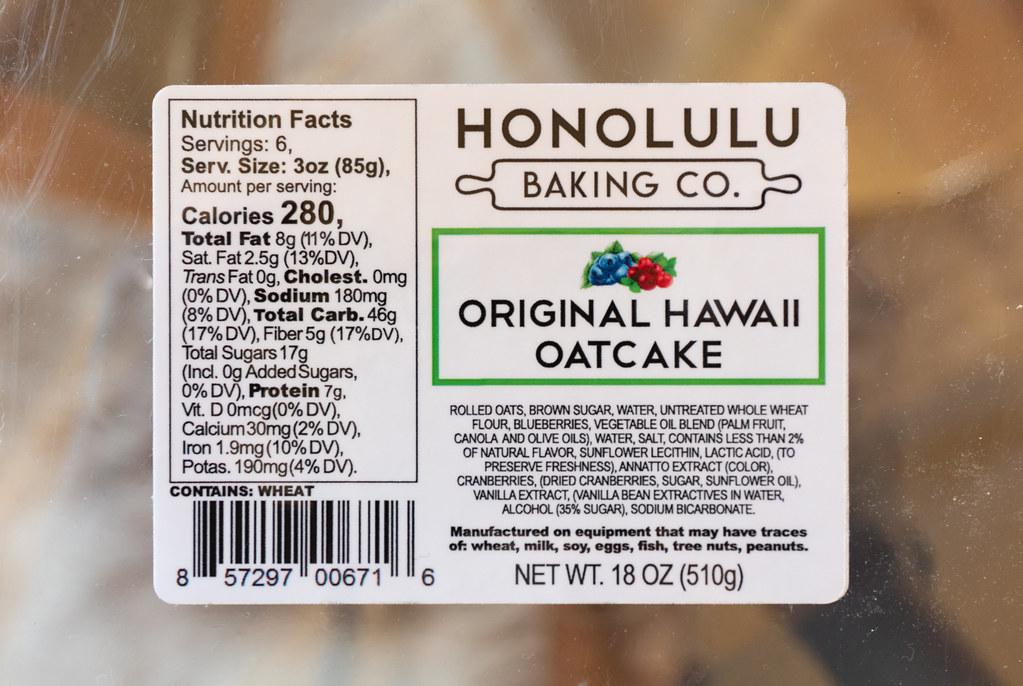 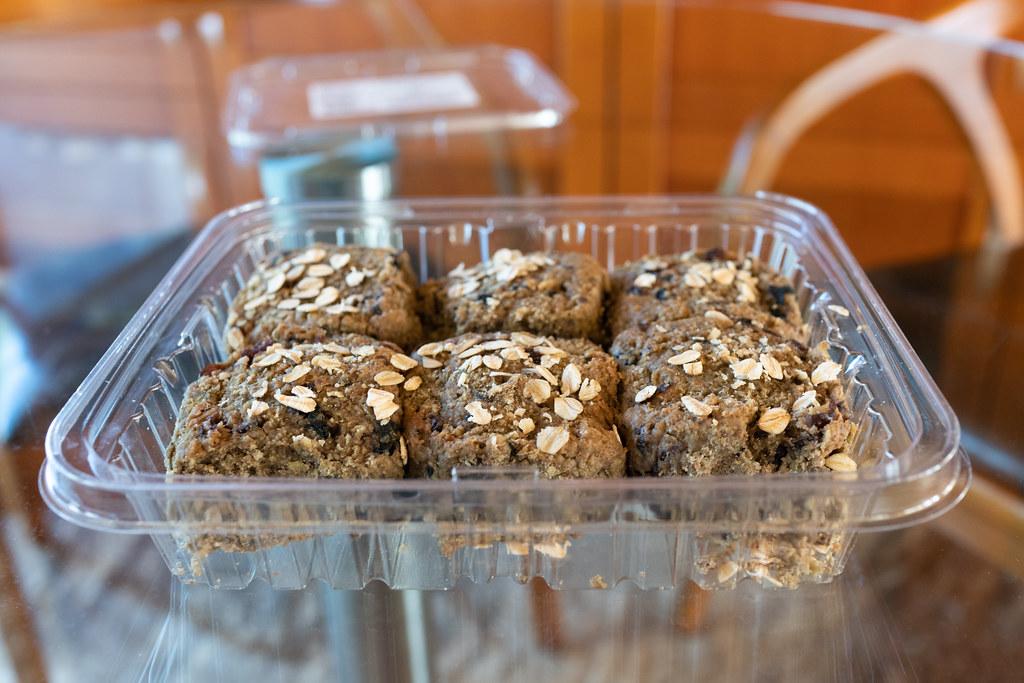 They taste as good as I remember! So happy. These are so hard to describe but you must try them. They're super dense and moist and nutty in all the right way. Bits of blueberries and cranberries speckled in there. My sister and I ate the entire box in one day. Then we went back a few days later to buy another box. They're great out of the box the first two days. After that you want to refrigerate and then toast them (super good hot). 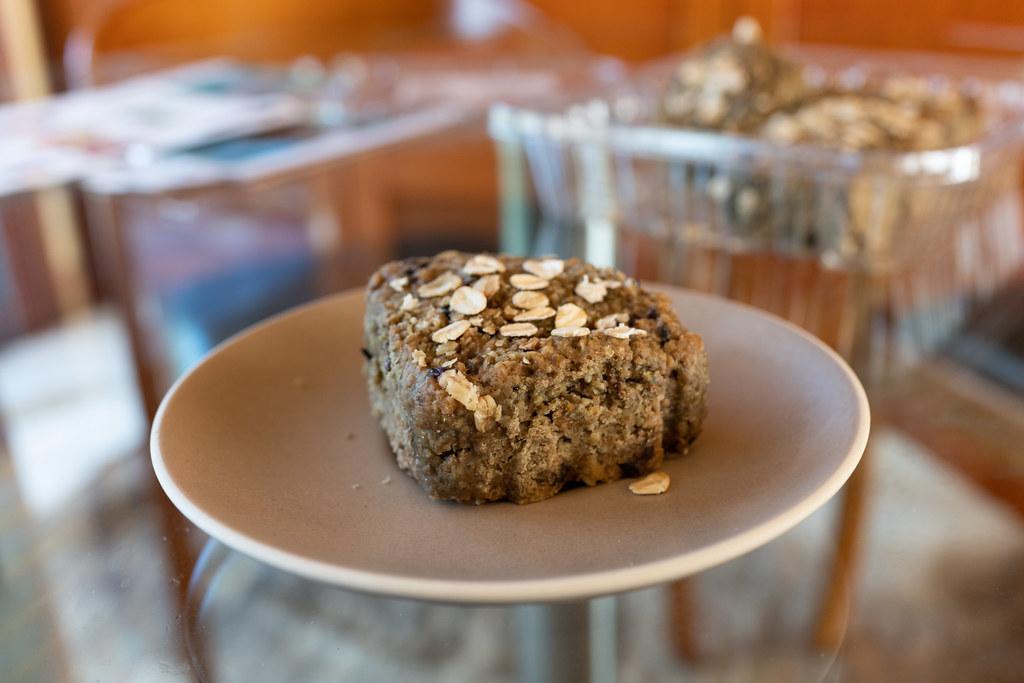 Note: Updates/posts 1-5 were made in past tense (as they were brought over from my old blog). All updates going forward will be made in present tense. Hope this doesn't get confusing. I'm just adding new updates as I receive them.

December 11, 2019. I got this update via web and instagram sleuthing:

Oatcakes are no longer available at Starbucks or Costco. They may only be purchased from the original baker, Honolulu Baking Co. in Kakaako. Orders must be placed via email ([email protected]) for pick-up at the bakery (523 Ahui Street, Honolulu) from 11am-4pm on Fridays. The oatcakes come as a six pack (three ounces each) for $12.99.

I received an email from the marketing manager of 7-Eleven Hawaii. The update:

I am contacting you on behalf of Honolulu Baking Company’s (HBC) oatcake fans. Our Fresh Pastry Category Manager, Alex Bautista, has been working with HBC to have available some of their pastry items. We are happy to have the opportunity to make HBC’s oatcake and a few other baked goods more accessible to customers on Oahu. Beginning September 1, all Oahu 7-Eleven stores will offer HBC’s oatcake for $2.09 each.

Hooray!! And only $2.09! That is a fair price. I'm not sure if they will be the larger original size oatcakes that were sold at Starbucks, or the smaller 3 ounce size that were sold at Costco. Either way, I am thrilled. Nice to know that we can stop by any Oahu 7-Eleven for an oatcake snack ^_^

Honolulu Star-Advertiser featured a newspaper article about the oatcake update on September 9, 2020. It says:

"Famed oatcake finds home at 7-Eleven’s Oahu stores
The Original Hawaii Oatcake — which found fame in the bakery case at Starbucks — is now available at 7-Eleven stores. The chewy, fruity oatcake was introduced last week at Oahu stores, along with a guava bar, macadamia nut bar and a s’mores-style crispy rice bar.

It’s the oatcakes that have the storied history, made by Honolulu Baking Co. and sold for years at Starbucks. In 2019, baker Yuri McPhail brought them back, selling them for a short time in six-packs at Costco outlets, then by preorder at her Kakaako bakery.

Has anyone tried the recipe yet? And is there a way to quarter it?

This sounds like an oatcake at Times Kahala. It is made by Akamai Foods, in several flavors, and, yes, dense. But round. 4 cakes to a package. It is on the end of the frozen foods aisle, across from the bakery.

Aloha Coral! The Akamai oatcakes are similar the Honolulu Banking Co. ones but not quite the same. They are both so delicious! :) - Kathy

Aloha from Australia! Thank you for the bad and good news. I have visited Oahu at least 20 times since 1996 and I cannot imagine not enjoying a few Hawaiian Oat Cakes when I am there. I guess it's no big deal to have stop at 7-Eleven on the way to Starbucks. However, if enough of us complain to managers and area managers perhaps Starbucks will realise their mistake and re-stock them. Take care.

Aloha Frank! Apologies for this very delayed comment reply ^_^ Agree! I still cannot imagine our local Starbucks without oatcakes, but don't mind the 7-Eleven stop. Anything for an oatcake! Take care and enjoy your next visit to Oahu ^_^ - Kathy

Oh my goodness, I used to eat these all the time during my first summer in Hawaii in 2001. Then I had family members bring them back to the mainland for me. Takes me back.....

Hi Michelle! Ahaha yes! Oatcakes are such a specific memory, love it :) - Kathy

Thank you for publishing this info. I love the Starbucks oatcakes for years. When they stop selling it I was very upset. Everytime I visit Hawaii I always see if any business carry it. Last year I went to Costco and was let down because nobody knew what I was talking about. Now Im here visiting family in quarantine and find out 7-11 going to be carrying my oatcakes. I am so happy! I'll be recruiting my sister to get some for me. Thank you!

Hi Leilani! So happy this post could be helpful! :) And great to meet another oatcake lover! I was so sad when they were gone from Starbucks, and then McDonalds. But now am super happy we can find it at 7-Eleven soon and direct from the bakery. Enjoy, enjoy! - Kathy