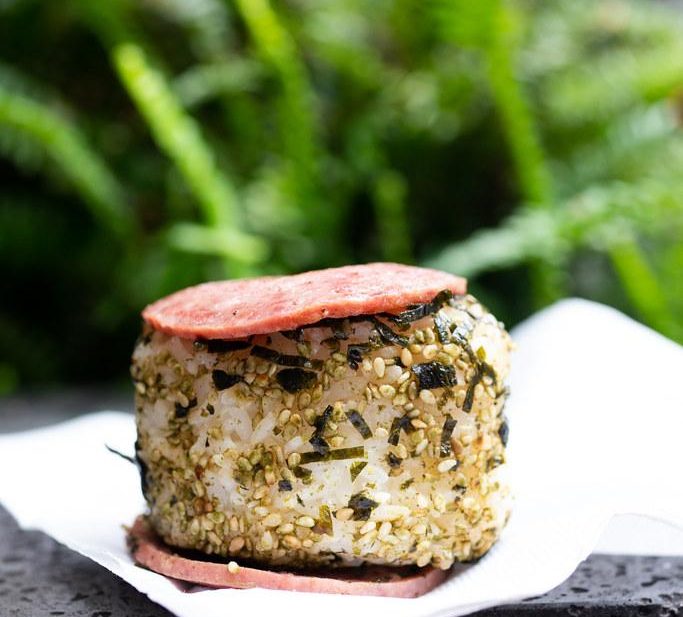 This fun musubi comes from the island of Kauai and only requires three ingredients: Goteborg sausage, rice, and furikake! Great for snacks and potluck parties.

Do you know about the Goteborg Musubi?

This playful musubi comes from the island of Kauai. It is made from rice, Goteborg sausage, and furikake. So easy and good.

This musubi is great example of how Hawaii food is a marriage of many cultures (other examples include saimin, shave ice, manapua, etc). The musubi rice part comes from the Japanese. The sausage comes from the Germans. These ethnic groups settled in Hawaii during the sugar plantation era in the 1800s.

Note: From Spam musubi to hot dog-egg musubi and teriyaki chicken musubi, we have many types of musubi in Hawaii. We even have food shops devoted to musubi!

Other Names For Goteborg Musubi

What Is In Goteborg Musubi?

You only need three ingredients for Kauai Goteborg Musubi:

The sausage is sliced and pan fried, taking on a concave shape. The rice is scooped in a ball and nestled in the sausage "bowl." Finish with a sprinkle of furikake. If you really love furikake (we do), you can roll the whole rice ball in furikake before placing it on top of the sausage.

Leave the top open and eat it just like that. Or top it with a second slice of sausage. This gives the musubi a cute little "hat" ^_^

What Is Goteborg Sausage?

Goteborg Sausage is a German sausage. It is made from both beef and pork. The main thing that sets Goteborg apart from other sausages is the size. It is BIG.

Goteborg Sausage is almost a foot and a half long (!) and two-inches in diameter. That is double, or triple, most other sausages you'll see at the supermarket.

Goteborg Sausage is available at all Hawaii supermarkets. It's in the refrigerated section alongside other deli meats. It is always Hormel brand (same company that makes Spam).

I'm pretty sure you can only get Hormel's Goteborg Sausage in Hawaii. I've never seen it on the mainland and it's not sold online. If you can't find Goteborg Sausage, try substitute another peppered hard salami...not quite the same but better than nothing ^_^

How To Cook Goteborg Sausage

Once you fry the sliced sausage, you'll notice that it takes on a concave shape. This shape is perfect for holding a small ball of rice.

Where To Get Goteborg Musubi?

For the most part, Goteborg Musubi is something you make at home. Or rather, your aunty/cousin/friend makes it at home and then brings to a potluck party.

Because the sausage is pretty big (it's sold by the pound and often in 2-3 pound packages), no one ever just makes a few Goteborg Musubi. If you're making Goteborg Musubi, you're going to make a lot of Goteborg Musubi! That's why it's so popular at potlucks, parties, and kids soccer games.

The classic Goteborg musubi topping is furikake, but you can get fancy and use many other type of toppings including:

How long can the musubi keep?

For best taste: eat the musubi the day you make it. You want the sausage crisp from the pan and the rice nice and fresh.

If you really must, leftovers can be wrapped in plastic and then refrigerated. The next day, take it out and let the musubi come to room temperature. Remove the plastic, wrap a wet paper towel around the musubi, put it on a plate and microwave for one minute.

How thick to cut the sausage?

Aim to cut the sausage 1/8-inch thickness. Many sauce that 6mm is the "golden number" to get the sausage to curl just the right amount when you pan fry it.

Substitute another peppered hard salami. Make sure it is at least 2-inches in diameter (otherwise you'll end up making miniature Goteborg musubi).