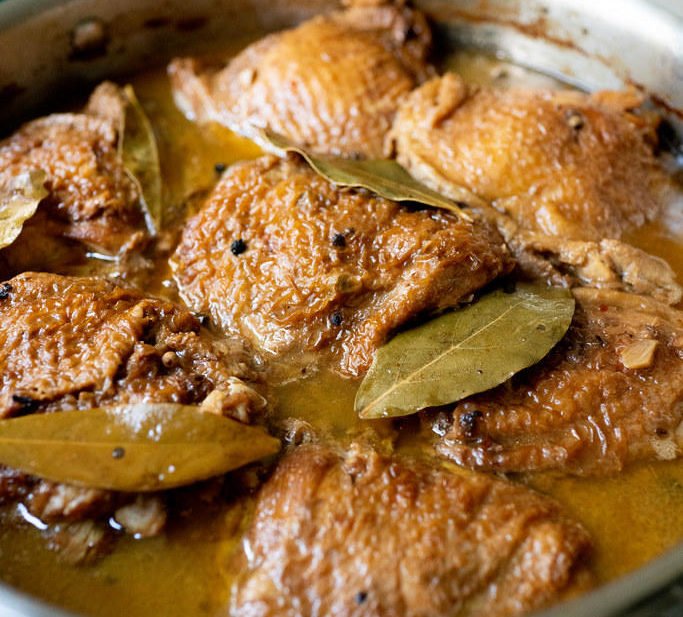 There are many versions of chicken adobo in Hawaii (you can even get adobo fried rice and adobo saimin). This is the version we love to make at home. It’s fragrant and saucy, and the chicken literally falls off the bone. Don’t forget to cook rice. 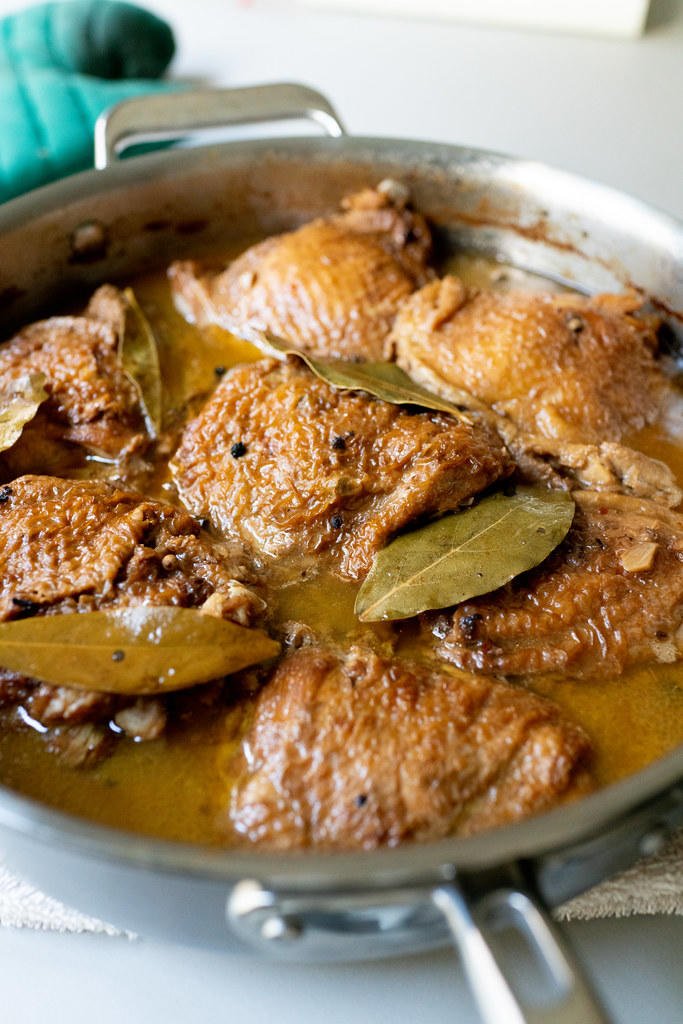 This chicken adobo is rich and fragrant with coconut milk and soy sauce. There’s a bright vinegar tang that makes you want more and more!

Chicken adobo is Filipino, but like all ethnic food in Hawaii, it gets mixed and jumbled (in a good and delicious way) and eventually becomes a form of local food.

While Filipino restaurants like Elena’s Filipino Foods in Waipahu makes amazing adobo, you can also eat adobo at many local (non-Filipino) restaurants. There’s adobo fried rice at Eggs ‘n Things (Ala Moana location only), don’t forget to add the sunny-side up eggs.

You can find pork adobo from Hawaiian/Filipino food spots like Fort Ruger Market near Diamond Head. Tip: order a mix bowl so that you have pork adobo and ahi poke and mac salad in the same bowl. Is Hawaii not the most magical place on earth?

You can find recipes for chicken adobo in nearly every local Hawaii cookbook (often spiral bound, the community/school/neighborhood association cookbooks are the best), and there’s often someone eager to share an adobo recipe. All the recipes are so different! Some call for white vinegar, others for apple cider vinegar. Many have sweet Maui onions, sliced thin. We’d have to live ten lives to try them all. 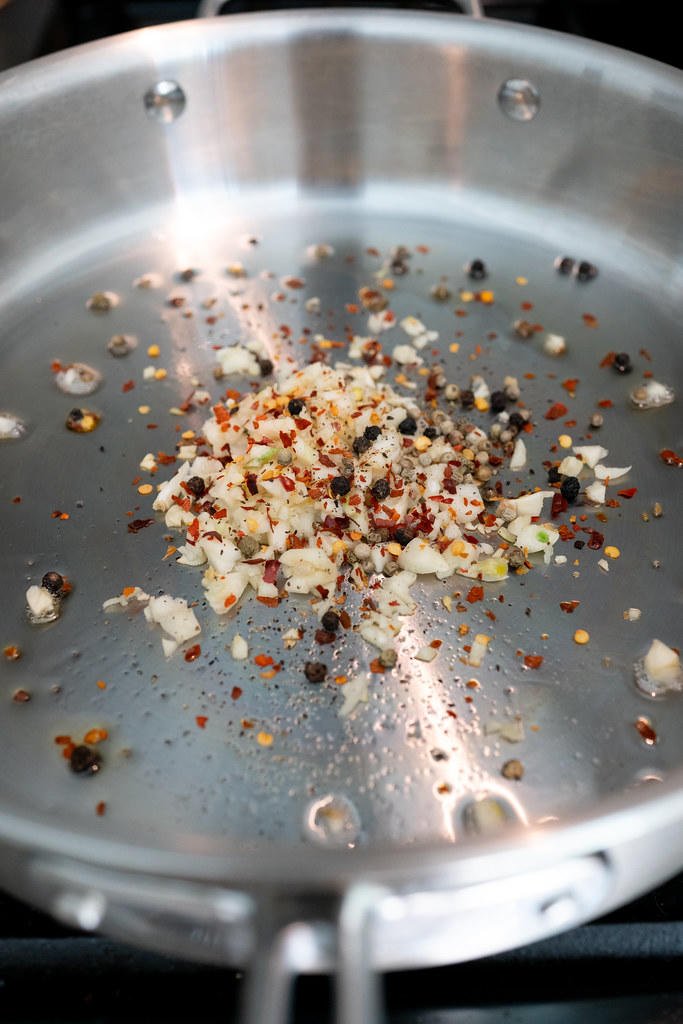 We didn’t make chicken adobo at home growing up (our home cooking was mostly Chinese and Vietnamese), but we were lucky to have friends that would bring chicken (or pork) adobo to potluck parties, and invite us to dinner at their home. We had family friends who were farmers. One Laotian family hosted giant “farm parties” (huge open air parties with hundreds of people on the farm) and everyone would bring food.

There’d be tons of Laotian, Thai, Vietnamese, and Filipino food. And of course, lots and lots of rice and insane curries and adobo! And the most dreamy desserts (more on that in a future post). As a kid, I don’t think I fully appreciated or realized how lucky we were to be invited to those dinner gatherings. I wish I had the foresight to document those feasts.

These days I eat adobo at local restaurants around town, but I also make it at home… 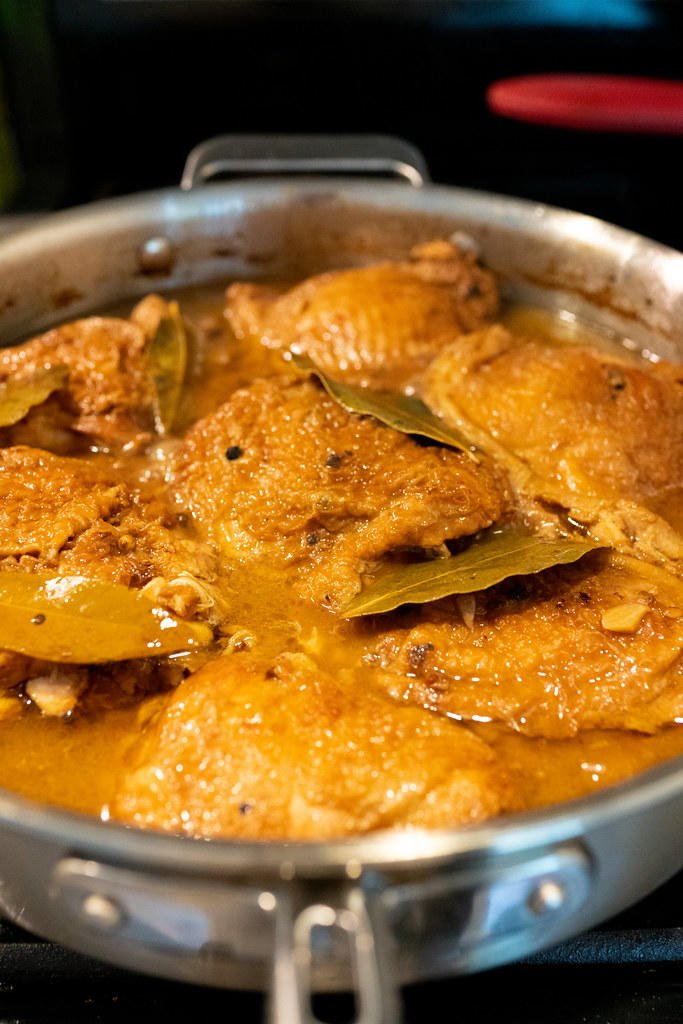 Back in October 2019, Ligaya Mishan (who is also a local from Hawaii!) and Angela Dimayuga published a real tasty article in The New York Times. It was called, Angela Dimayuga’s 10 Essential Filipino Recipes. I read the recipe for Coconut Milk Chicken Adobo over and over again. It sounded so amazing. I swear I could smell adobo cooking just reading the recipe.

What attracted me to the recipe was the intensity of coconut. I love coconut and this recipe called for coconut in three forms. Coconut oil, milk, and vinegar! I made it once, and then I made it again and again. It was insane good.

I packed it for my husband’s “home lunch,” and his Filipino colleagues gave thumbs up approval (made my week ^_^) 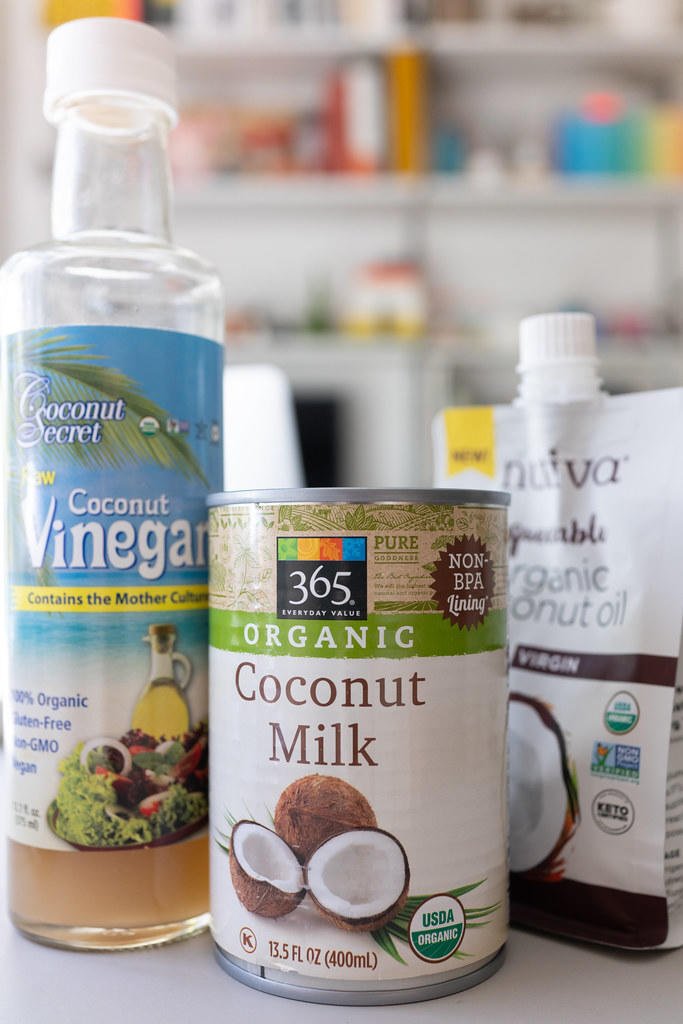 Adobo (with regards to Filipino food) refers to a cooking process/technique. This technique involves meat being braised/slow cooked with vinegar, garlic, soy sauce, bay leaves, and black peppercorns. Everyone uses different ratios (and even different types of vinegars…white vinegar, apple cider vinegar, coconut vinegar, etc). I like my adobo more vinegar-y while a friend prefers to go light on vinegar and heavy on the soy sauce.

What Makes This Recipe Special

Featuring coconut in not just one, but three forms is what makes this recipe so special. The recipe calls for: 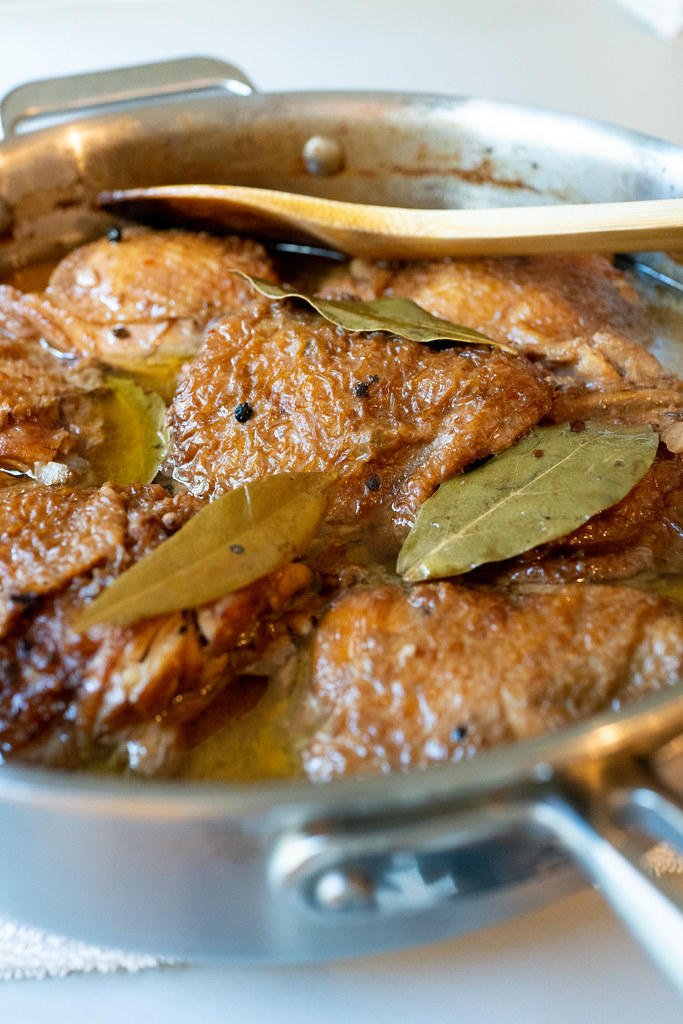 Chicken adobo is ready. Rice is ready. Let’s dig in!

I recommend making this recipe as-is (at least the first time!), but there are few adjustments you can make:

This recipe was adapted from a New York Times article by Ligaya Mishan and Angela Dimayuga. It's called, Angela Dimayuga's 10 Essential Filipino Recipes. It is a must read and will make you hungry for good food ^_^