Shige's Saimin Stand is a saimin restaurant on the west side of Oahu. Order the saimin (their noodles are made in-house daily), teri cheeseburger, and bbq sticks for the ideal local lunch! 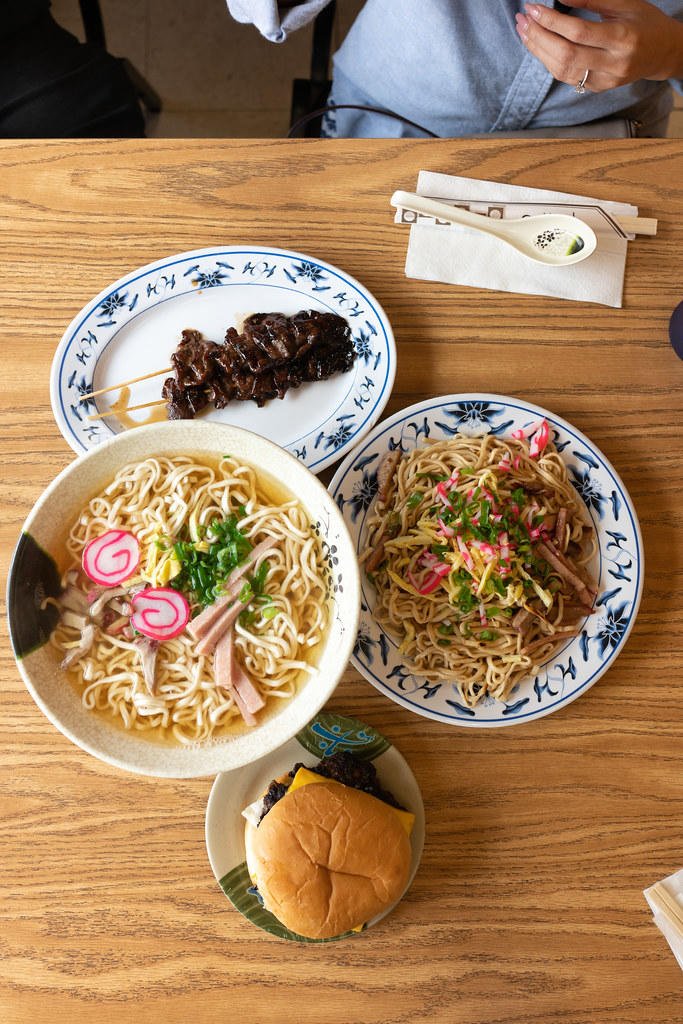 Welcome to Shige's Saimin! This local saimin restaurant opened in Wahiawa in 1990 and has been packed ever since. The saimin noodles are made in house, the teri cheeseburgers are heavenly, and everyone is real friendly here. Many say that Shige's makes the best saimin in Hawaii (I am partial to their fried saimin).

There's both table seating and counter seating (great for solo meals), though be prepared to wait if you come during prime lunch hours.

From the dozens of high school prom pictures hanging on one wall, to regulars being greeted by name, you get a real sense of community at Shige's. Most of the diners here are long time regulars (it makes you wish you were also a regular ^_^). 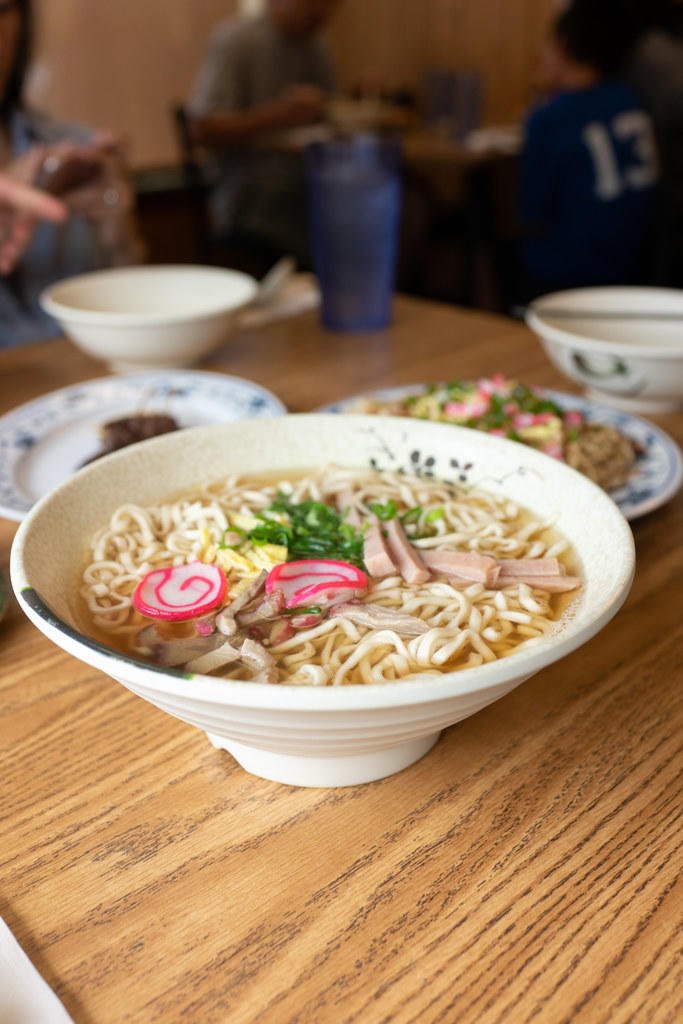 Good question! Saimin is important to Hawaii's eating culture. It is THE noodle soup dish of the islands (same way like how Japanese have ramen, Hong Kong has wonton mein, etc). Saimin soup is made from a clear dashi-based broth and the noodles are wheat-based noodles.

We have restaurants devoted to the tradition of saimin (and good local food in general). On Lanai there is Hamura Saimin. On Maui, there is Sam Sato's. And on Oahu, we have Shiro's Saimin Haven and Shige's Saimin Stand!*

Here's an entire about post about saimin in Hawaii. 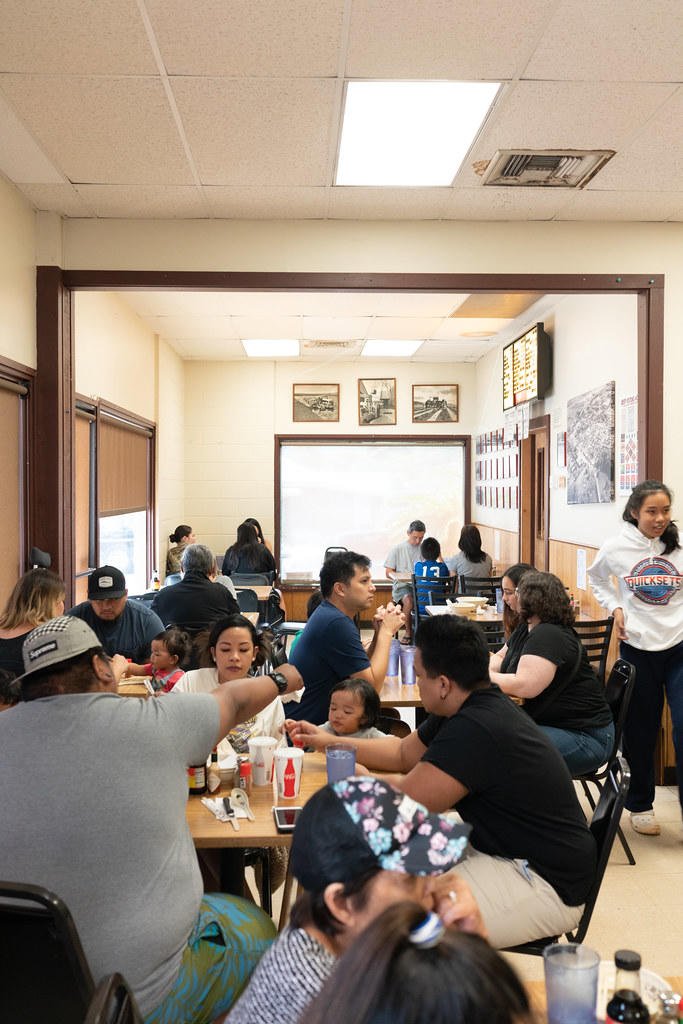 Where Is Shige's Saimin Stand?

Shige's Saimin is located in a town called Wahiawa, on the west side of Oahu. Wahiawa is an old school, real local town. This town went through a bit of revival in the last few years, and now it's an unexpectedly hip and trendy area.

Wahiawa is also a popular area for people stop by on their way to/from the North Shore (people usually stay in Waikiki and visit North Shore as a day trip).

There's lots of great food in this area in addition to Shige's Saimin. Make sure to also visit Black Sheep Cream Co., Surfer's Coffee, and Tanya's Pies and Grill.

What To Order At Shige's Saimin Stand

Options are always overwhelming, but stick to the classics at Shige's and you can't go wrong! Here's what we like to order: 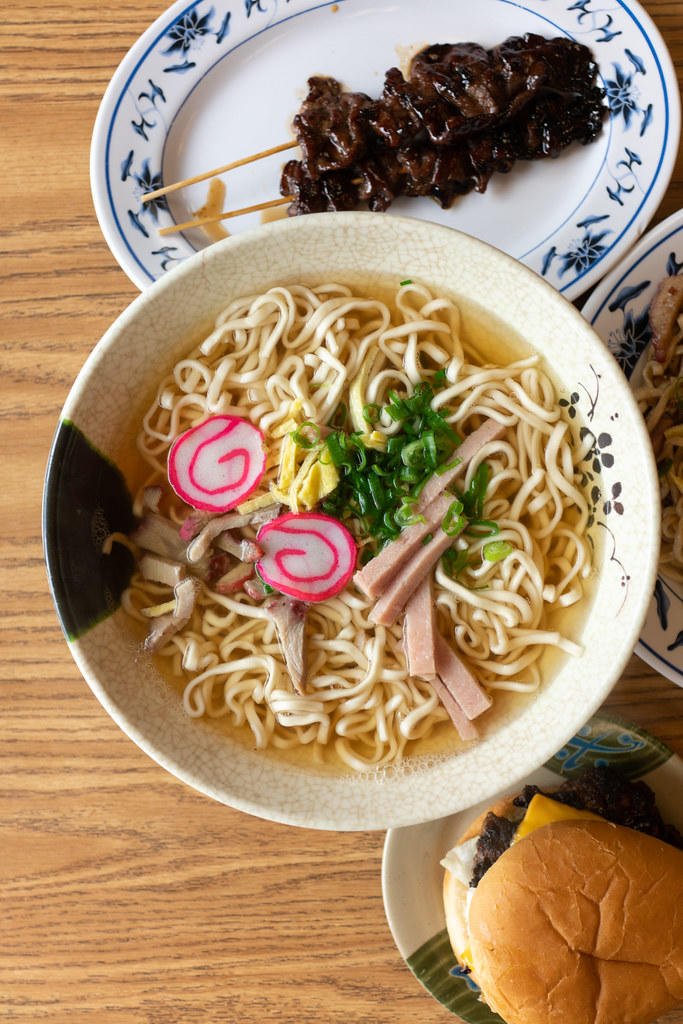 Saimin
Saimin is Hawaii's iconic noodle soup dish. I have a giant post detailing the story of saimin here. At Shige's the saimin is so good because they made the saimin noodles in house. Every restaurant offers different toppings and Shige's version has Spam, green onion, egg (beaten, pan fried, and sliced thin), and kamaboko (fish cake).

P.S. You can also opt to add wontons (listed on the menu as "wonton mein"). They also have a vegetarian saimin option. 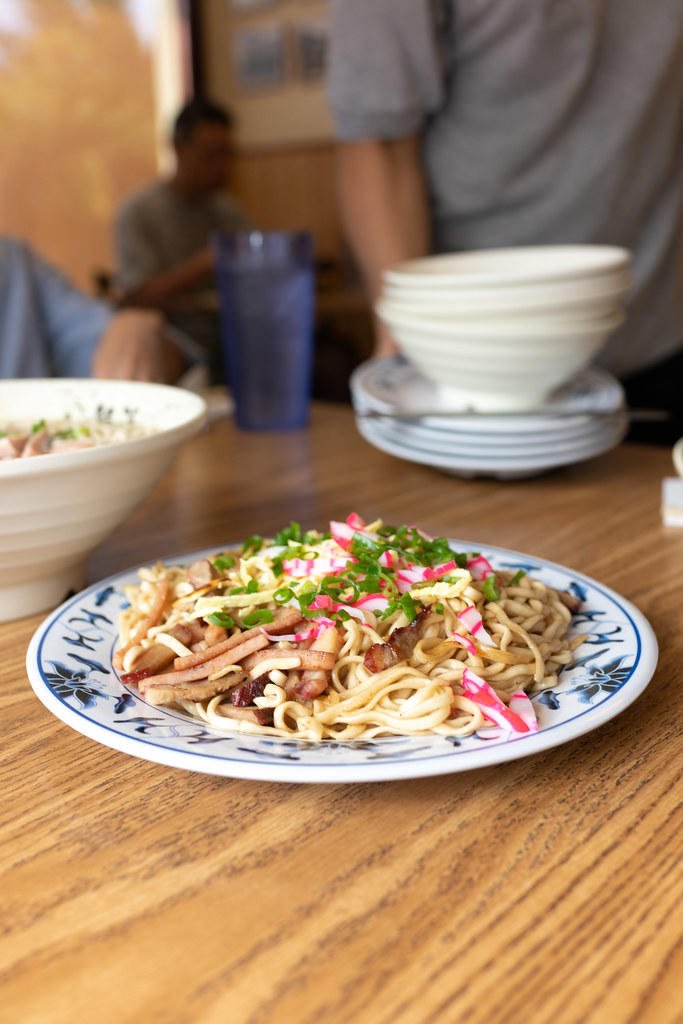 Fried saimin
Saimin is Shige's famous dish, but I (shhhh) secretly prefer their fried saimin! Same noodles, but no soup. Instead the noodles are stir-fried with all the same toppings. So good. These housemade noodles at Shige's are special, and this dish best showcases how wonderful they area. Definitely get the fried saimin. 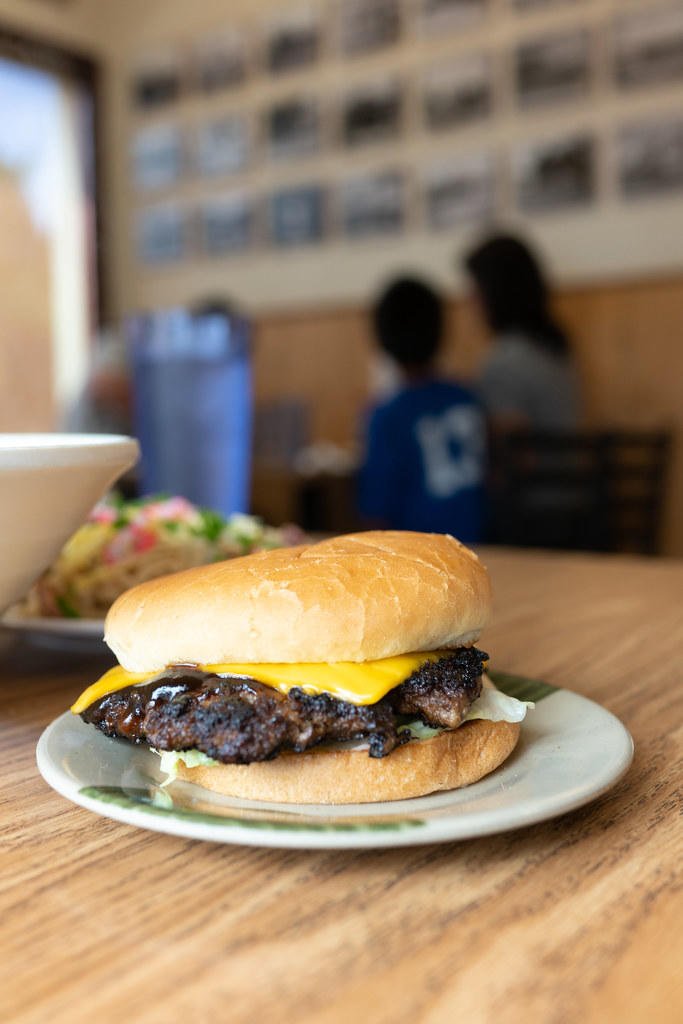 Teri Cheeseburger
I don't know when or how eating saimin with a burger (and bbq stick) became a thing in Hawaii, but that's just how it's done. Saimin, burger, bbq stick - it's a classic trio meal. You need to eat a burger when eating saimin. That's why they make the burgers on the smaller side, so you can have room for both. I always order the teri burger (short for teriyaki burger) with cheese. They make it nice and saucy at Shige's...real onolicious! 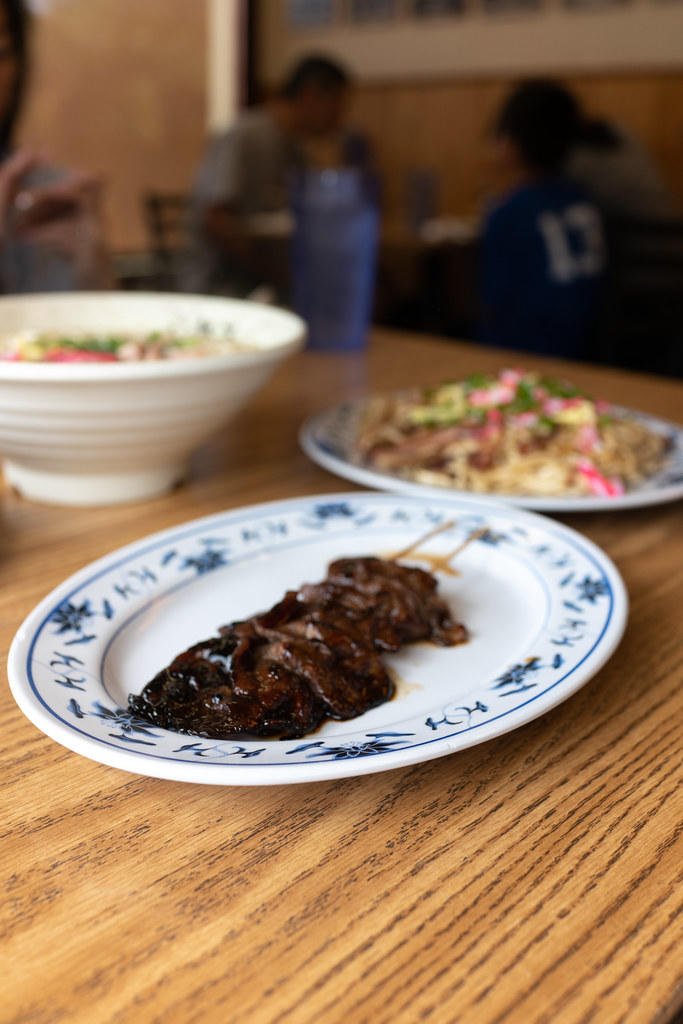 BBQ Stick
BBQ sticks are also an essential part of the saimin experience. Beef is the most common meat for BBQ sticks (though some places also offer chicken and pork). Like the teri cheeseburger, Shige's lays on the sauce. It's a sweet-savory teriyaki sauce and a must have accompaniment to the saimin and burger. 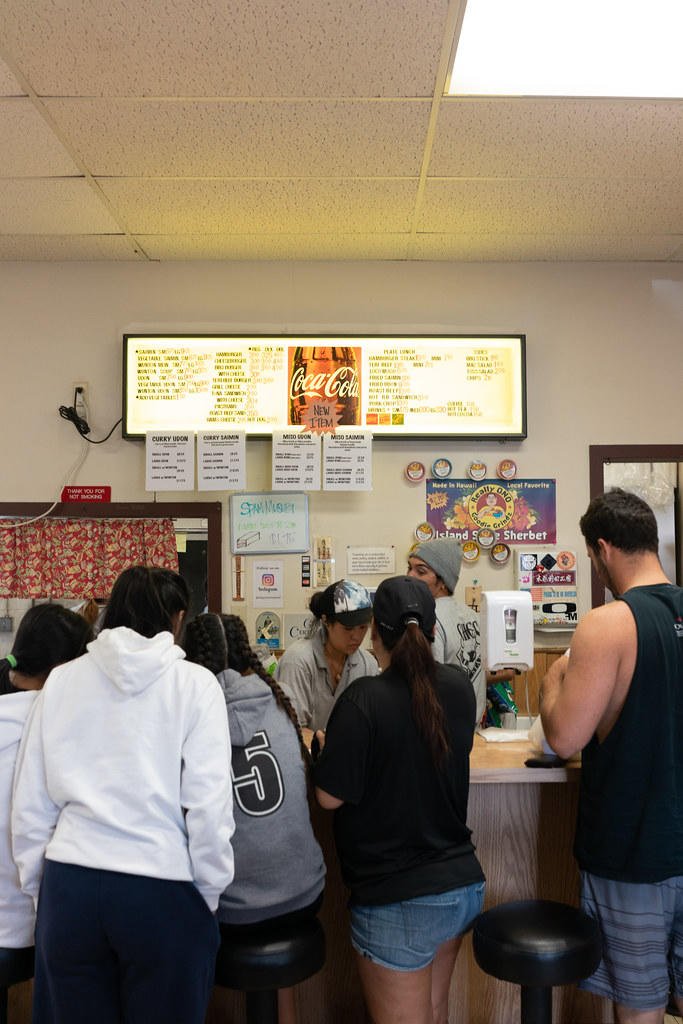 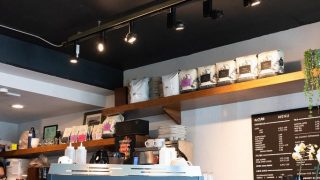 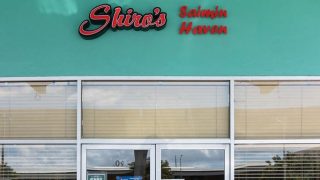 Hi Kathy: I have never heard of, nor tried, Shige's saimin. But then again, I left Hawaii in 1983 before they even opened. I had a buddy that lived in Wahiawa that I used to go spear fishing with, so I was in Wahiawa a lot in the old days.

I was also a saimin fan in my day. I used to eat a lot at places like Palace Saimin, Saimin House, Washington Saimin, Dillingham Saimin, Sekiya's, and Tanoue's in Kaimuki. I wonder if you ever ate at any of these places or even heard of some of them?

Yup, in my day, it was very typical to take your date to eat saimin late at night before taking her home.