Pan Sushi is a popular Hawaii potluck dish. It also makes for an easy DIY sushi meal at home. The layering ingredients (like crab, avocado, and cucumber) are flexible, just make sure you have rice and furikake. 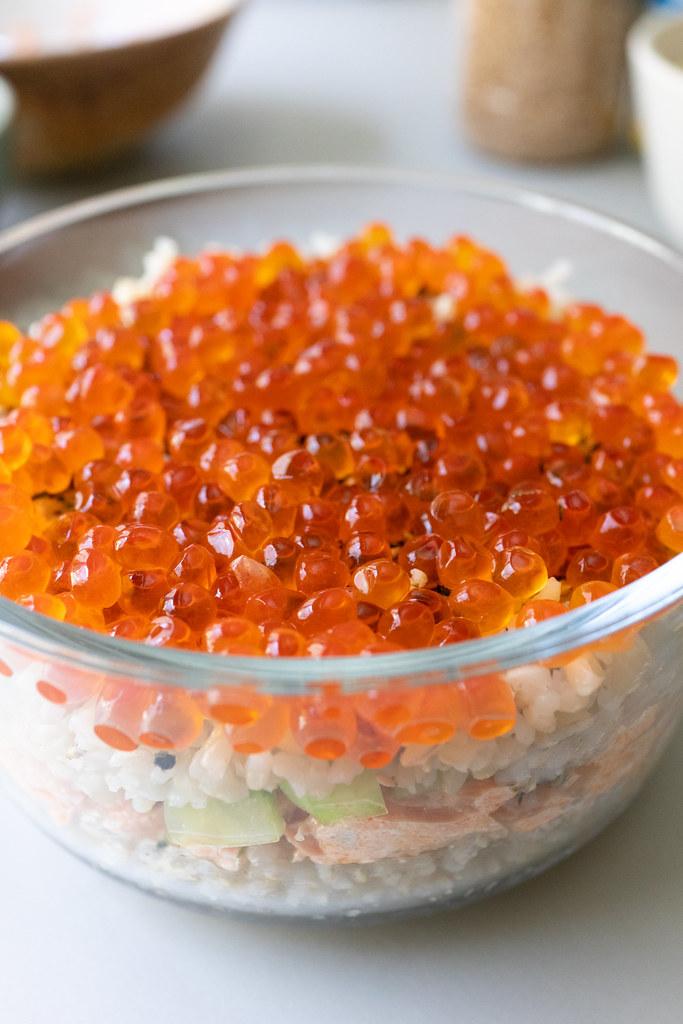 Have you heard about Pan Sushi? This is a popular Hawaii dish often found at potluck parties, gatherings, and sports games (especially kids soccer games).

What Is Pan Sushi?

Basically all of your favorite fun sushi roll fillings but layered instead of rolled. The ingredients are flexible and can be tailored to what you have on hand. Everything is layered and pressed together in a pan, hence the name Pan Sushi. 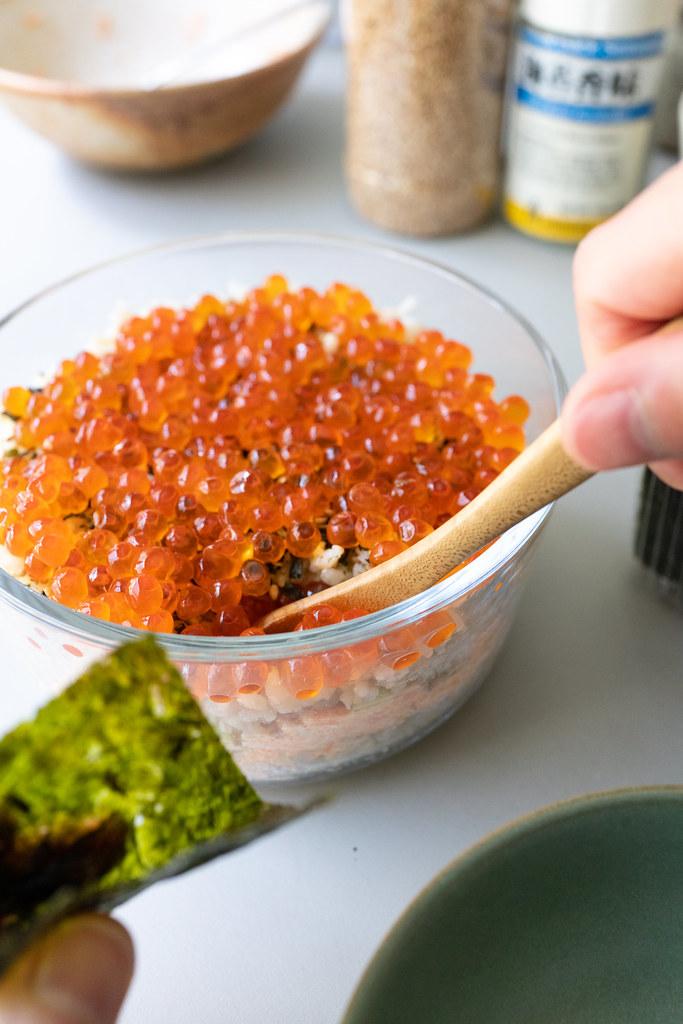 How To Eat Pan Sushi?

There are two main eating styles:

Scoop and Fold (with nori)
Take a big scoop of the pan sushi and put it on your plate. On the side of your plate are a few sheets of nori (seaweed). Put a spoonful of the pan sushi on the nori, and eat! It’s an extra easy version of DIY hand rolls. This is the more common version and the one I’m posting about today.

Pre-Cut Squares
For this method, you must layer the nori directly in the pan when making the pan sushi (make the nori the bottom and top layer of the pan sushi). Press tightly so that all the layers are packed. Refrigerate the whole pan sushi for an hour. Then cut into squares. Everyone picks up a square and eats it just like that. 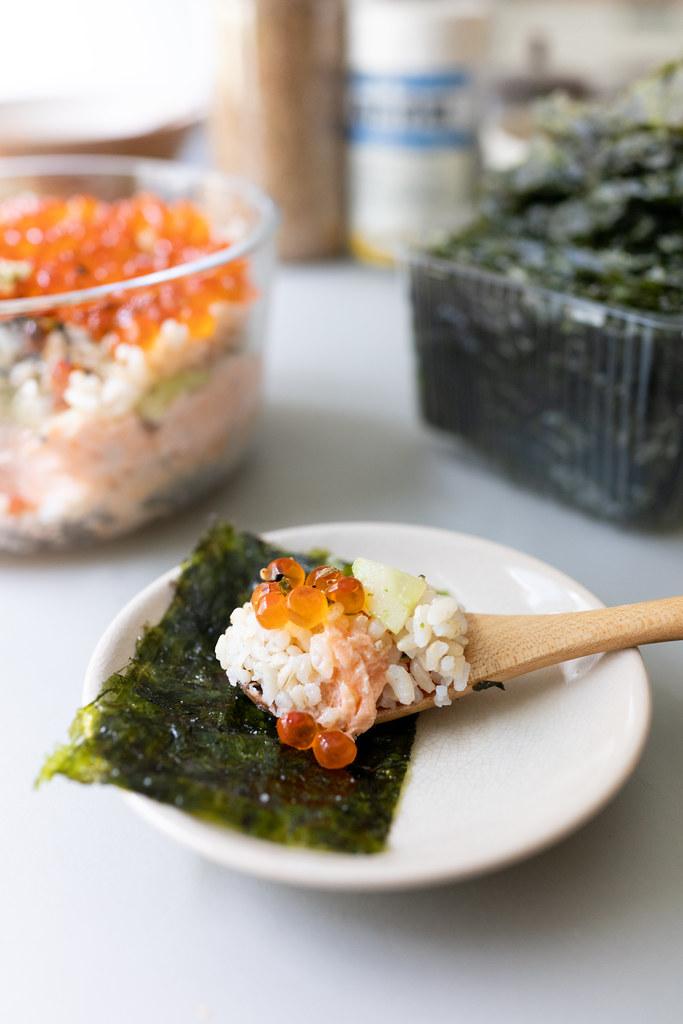 Scoop and Fold Method: just put a small scoop on a piece of nori and eat

Where Was Pan Sushi Invented?

As far as we know, Hawaii!

Pan Sushi was invented out of convenience. We love and know good sushi in Hawaii. But we are not snobby about it. What my friends and I missed most on the mainland was the lack of good, casual sushi. Sushi on the mainland usually comes down to two options: not-so-great sushi or $300 omakase. Few things in between.

In Hawaii, we are lucky to have all kinds sushi at every price point. When we meet with friends for a casual weekday lunch and say, “let’s get sushi,” it’s very normal and regular (sushi isn’t just a special occasion thing). It’s not unusual to eat sushi multiple times a week because we can get high quality and affordable sushi in Hawaii.

That’s why the idea of making “big batch” sushi is not a big deal. Hawaii is very family friendly, and gatherings with entire groups of families and friends are common. Someone is bound to bring a big tray of pan sushi to the party. The pan sushi is set on the table (along with many good local eats from other guests). Each person puts a big scoop of pan sushi on their plate so they can make individual sushi wraps/bites with nori.

Pan sushi is also popular at kids soccer games. My sister played elementary school soccer and a different parent was in charge of the post-game snack each week. One mom was known for her super good pan sushi. She precut them into squares…much easier making individual sushi pieces. All the kids would grab a square and devour (often with a chilled can of POG from the cooler). I bet it tasted extra good after running in the sun for an hour! 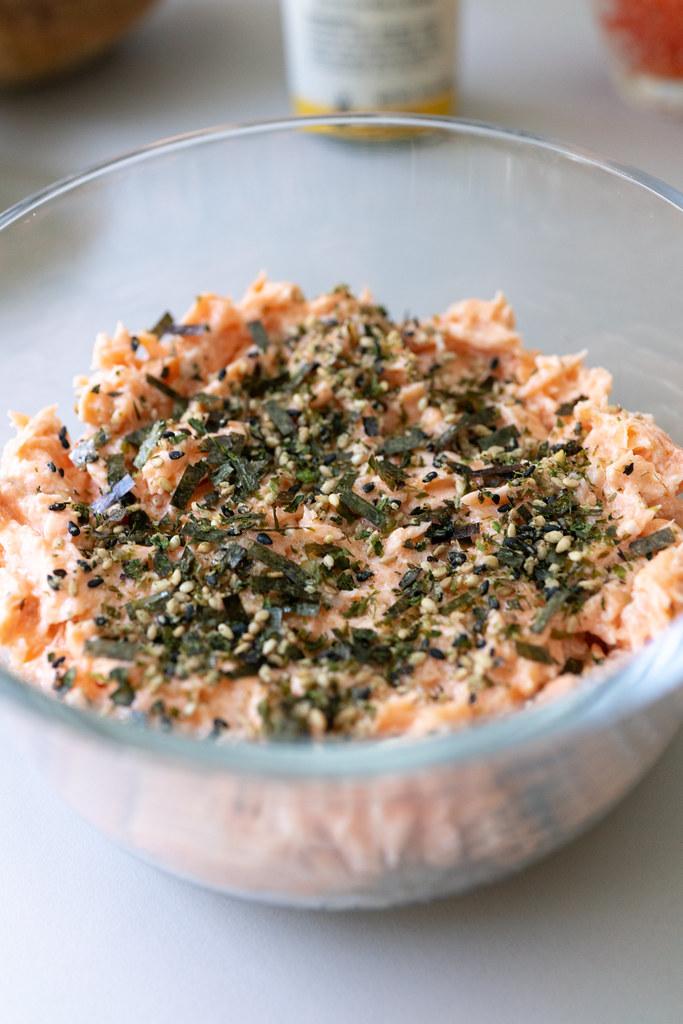 It’s all about the even layering when it comes to pan sushi.

Other Names For Pan Sushi

Pan Sushi is the name we most often use, but people also refer to this dish by other names: 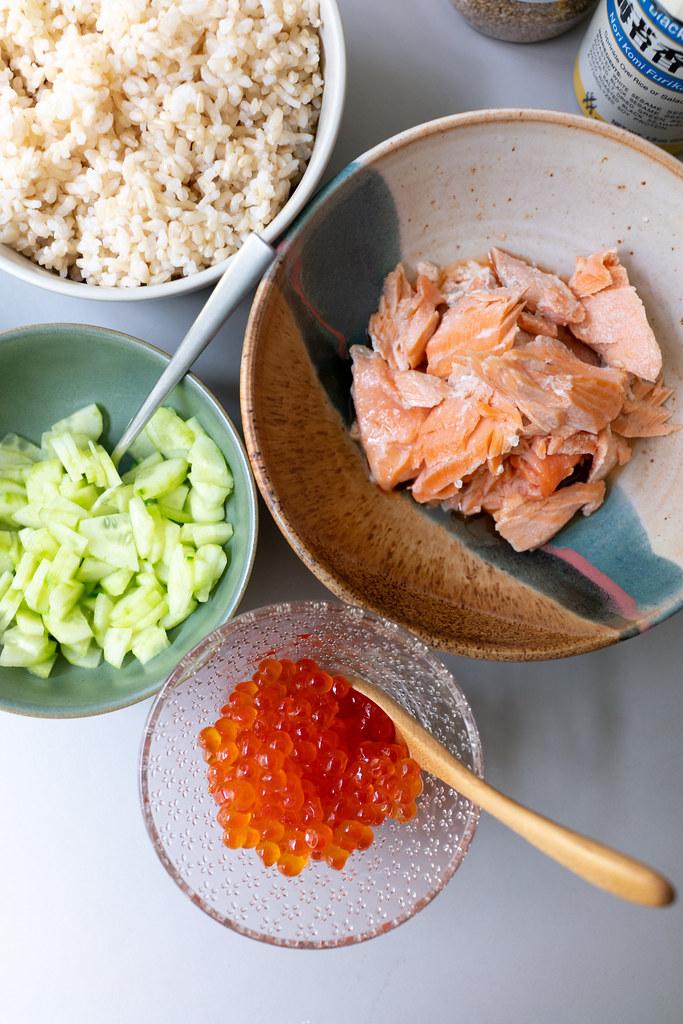 Rice, salmon (to be mixed with mayonnaise), ikura, and cucumber. Mix and match your favorite sushi roll fillings.

What Can You Put In Pan Sushi?

Pan sushi is super flexible. Everyone does their own version. There is no right or wrong, that is the beauty of it.

Make sure you have the basics (rice, furikake, etc), and then you can mix it up from there:

Rice
Pan sushi is usually made for a group, but I’ve just been cooking for two of us lately. I cook one cup of rice for two people.  After the rice is done cooking, remove from the rice cooker, let it cool for about 15 minutes and season with a mix of sugar, salt, and rice vinegar.

Furikake
You can use any kind of furikake you like. We usually get this Nori Komi Furikake.

Protein
Imitation crab is the most common protein for pan sushi. You can also use canned tuna or salmon, and even kamaboko (fishcake). I usually have salmon in the freezer so I’ll defrost a half pound fillet and bake it in the oven. Let cool and then flake it with a fork. You can also mix protein (I know some people love doing half imitation crab and half real crab).

Whatever protein you chose, flake/shred/dice small and mix it with a spoonful of mayonnaise. Why mayonnaise? Because 1) it tastes good, and 2) this allows you to spread the crab/tuna/salmon more easily over the rice.

Cucumber
Cut the cucumber into small dice (or thin slices, up to you), and sprinkle with a little salt and mix. Set aside for 15 minutes. The salt will draw out the water and make the cucumber extra crisp.

Avocado
Whether sliced thin or diced, avocado is always welcome in pan sushi. 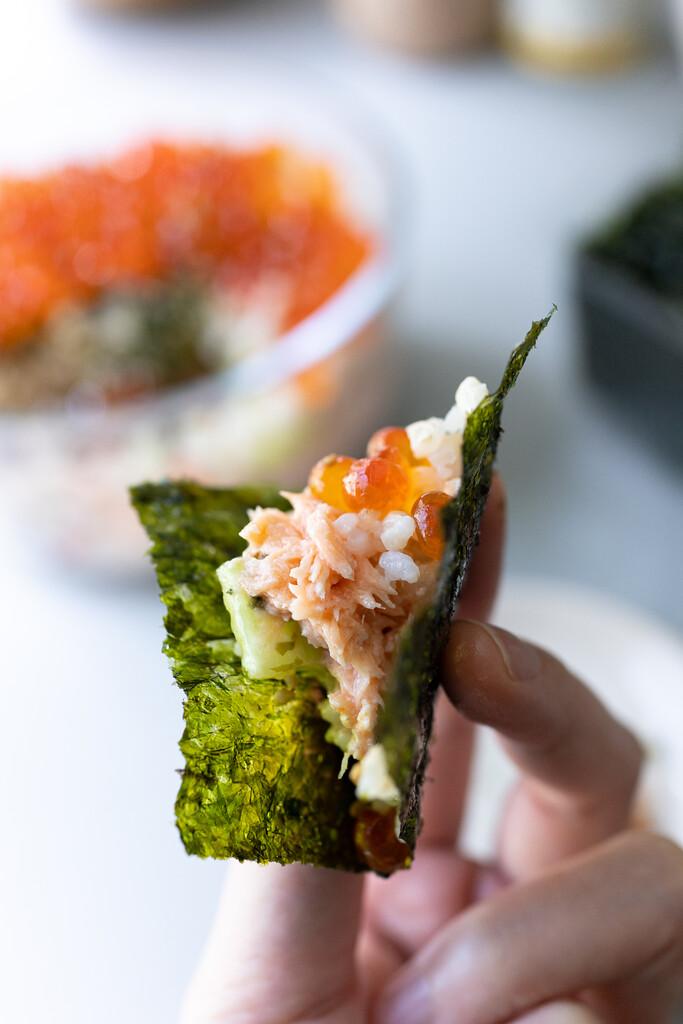 I’ve been reading your blog since you started it, but this is my first time commenting.

I made this pan sushi recently for my husband and I and it was a huge hit. I followed your recipe almost exactly, but made two changes/additions: First, I marinated the salmon in some teriyaki sauce, then air fried it because I didn’t want to turn the oven on (it was over 90° out). Second, I added some masago to the salmon and mayo mixture. This recipe was so easy and SO GOOD! It is definitely being added to our dinner rotation.

I have really enjoyed reading about all of these Hawaii & Hawaiian treasures that you have covered so far on the blog. Keep up the great work!

Hi Helen! Thank you so much for the kind words (you made my day ^_^) I'm so happy you are enjoying the blog! Love the idea of teriyaki sauce and air frying. And adding the masago was a brilliant idea...I can almost taste it now! - Kathy