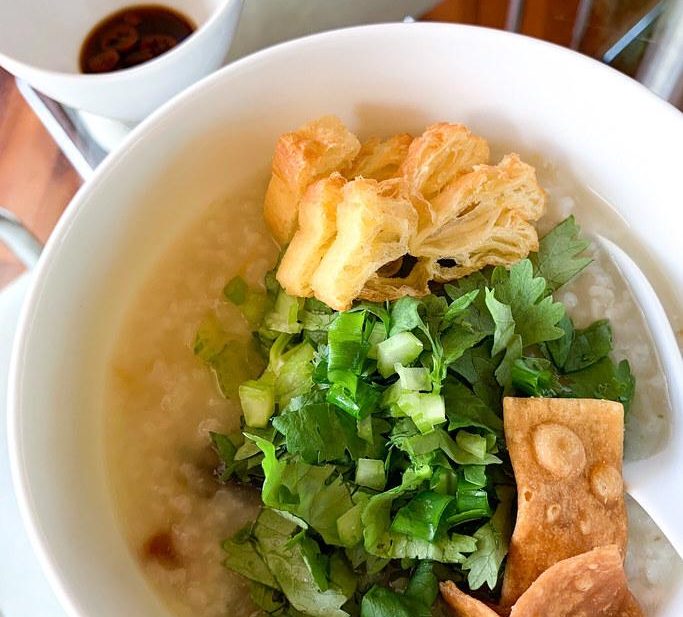 Congee is a weekend breakfast staple at our home. This is a classic Cantonese-style congee made with pork and century egg. Make it in the Instant Pot for an easy and satisfying meal.

Congee (jook) is comfort food. You only really need two ingredients for congee: rice and water. But we add in a few extras ^_^

Congee is also family food, solo food, and when-friends-come-over food. We often make a big pot of congee on Saturdays for a late breakfast or early lunch. Leftovers keep well for afternoon snack or breakfast the next day.

The congee toppings and accompaniments often change (it depends on who is in charge of making the meal). But we always prepare it classic Cantonese-style with sliced pork and century eggs cooked directly in the congee.

Congee is called jook in Cantonese. Because there are many Cantonese people in Hawaii, you'll see the word jook on menus more often than the word congee.

Many restaurants in Hawaii serve this specific century egg and pork congee including a few favorite dim sum spots like Tai Pan and Legend Seafood.

What Are Century Eggs?

They may look old but they are definitely not a century or thousand years old. Century eggs are preserved duck eggs. The yolk is a green-gray color (it's super creamy and rich) and the whites are a deep and translucent black/brown shade.

I love century eggs. Some people say it is an acquired taste, but we grew up eating these all the time so they taste very normal to me.

We'll do another post on the million ways to eat century eggs (like eating them with picked ginger and sugar!), but for this congee dish all you need to do is peel and cut it into pieces.

The eggs are already "cooked" and ready to eat. Some people prefer to dice it into small pieces while others cut it into wedges. The translucent egg whites remain intact in the congee while part of the yolks "melt" into the dish. So good!

We used to cook congee over the stove (takes over an hour of cooking), but the Instant Pot makes it much faster. Easy, hearty, and satisfying.

Ready to start? First get your ingredients in place. Here's what you'll need:

Now we can start cooking:

First, rinse the rice well. I usually do 3-4 rinses, until the water runs almost clear. Then put the rice, chicken broth, and water all together in the Instant Pot.

Cook it on High Pressure for 30 minutes. Set it for a Natural Release.

After the congee is ready, open the lid. Press the Sauté button (set the time for 5 minutes). Add in the century eggs, pork, and ginger. Keep stirring gently until the pork is cooked through.

Season to taste with the fish sauce and white pepper. And then you are ready to eat! Spoon everyone a big, generous bowl and enjoy ^_^

For serving, lay out many small bowls and plates filled with different toppings and accompaniments. All these toppings are optional, but they make the meal so much more fun and complete. More on this below.

This is the fun part! You can eat century egg and pork congee plain. Or you can jazz it up with many toppings and accompaniments. We divide the toppings into three different categories:

Dipping Sauce (for the pork and crunchy toppings)

No Instant Pot? No problem!

We often make a half portion of this congee recipe on a stovetop. It's just as easy, but requires a longer cooking time. You'll want to bring the rice, chicken broth, and water to a boil, and then turn it down to simmer for about 1 hour. The add in the century egg, pork, and ginger. Stir and cook for another 5 minutes (just until the pork is fully cooked through). Season with the fish sauce and white pepper. Eat and enjoy.

Does it have to white pepper?

Yes. The white pepper is what gives this congee that distinct, signature flavor. But if you don't have white pepper, don't let this stop you from making the dish...you can use black pepper this time (just make sure to get white pepper for next time).

Yes. It makes a huge difference and is the main seasoning ingredient in this congee. But! As with the white pepper, don't let this stop you from making the dish if you don't have it. Season with a bit of soy sauce instead. It won't be the same, but still worth making.