This post includes affiliate links. We may earn a small commission (at no cost to you), if you purchase through these links.
Jump to Recipe

Hawaiian pizza is not Hawaiian...but it is tasty. It's topped with tomato sauce, mozzarella, ham and bacon, plus pineapple. We also add onions. Here's the recipe and how/why this pizza came to be associated with Hawaii. 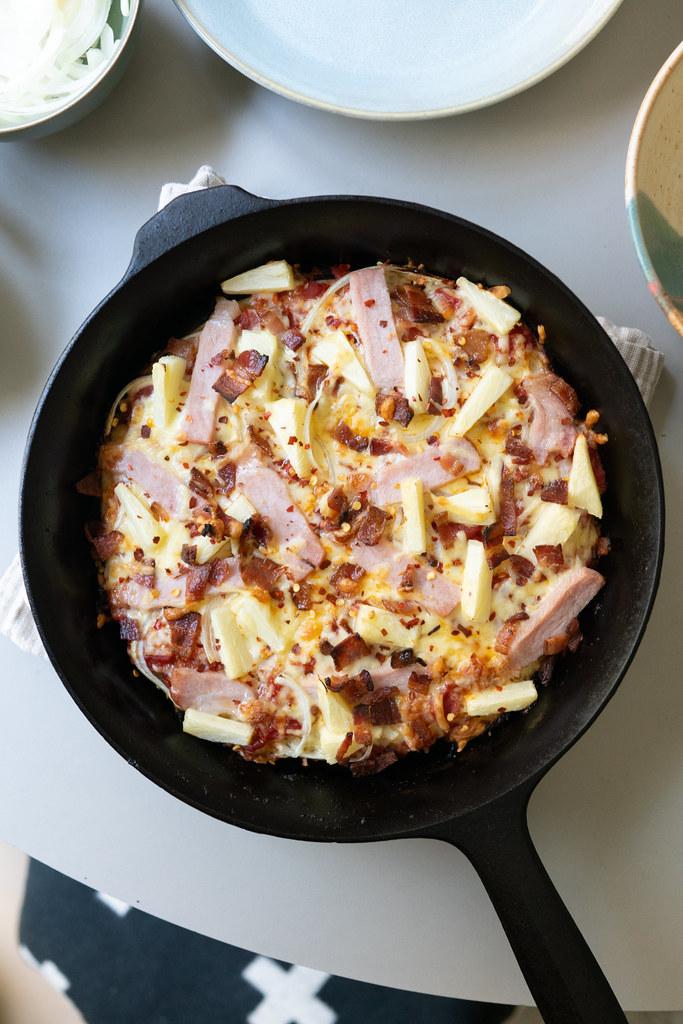 Ready to eat! Recipe at the bottom of this post.

"Hawaiian Pizza" Is Not Hawaiian

Three key facts before we get to the history and recipe:

The only restaurants in Hawaii where you can find Hawaiian pizza are at tourists traps. Well! Then where did Hawaiian Pizza come from? 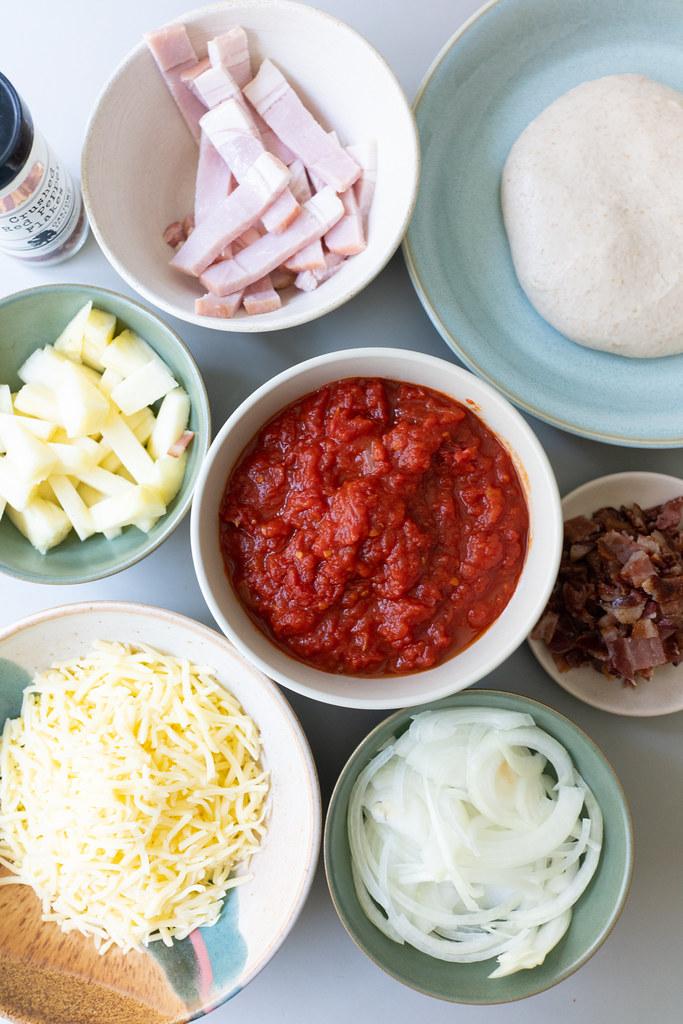 Hawaiian pizza is from Canada (!!) Who would have guessed?

It was invented in 1962 by a Greek guy who owned a pizzeria in Ontario, Canada. He liked how Chinese dishes mixed sweet and savory flavors, and thought to try the same on a pizza. Hence the pineapples.

But how did it get the "Hawaiian" name? It was because the brand of pineapples he used were from Hawaii!

That's how this pizza got it's name. The name stuck.

What Is Hawaiian Pizza?

It's a pizza topped with tomato sauce, ham, bacon, onions, mozzarella, and pineapples.

When made right, Hawaiian pizza is pretty tasty. We just wish it went by a different name...Pineapple Pizza, perhaps? Here's how to make it. 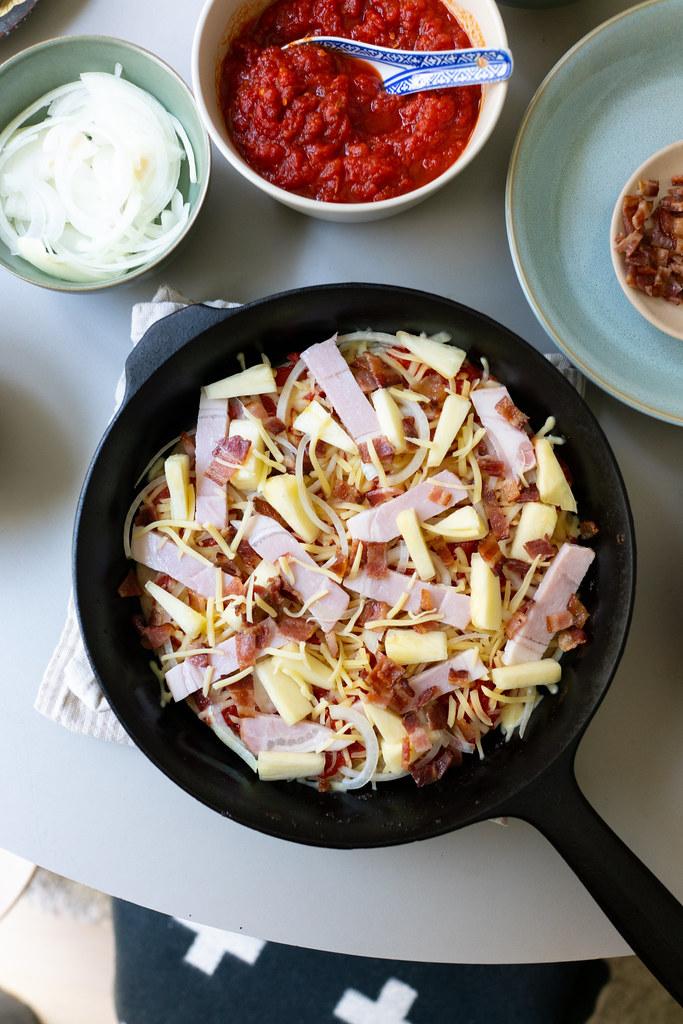 Right before it goes in the oven.

Now we start cooking. This recipe is actually more about assembling than cooking ahaha.

Bring your dough to room temperature. Then roll out the dough. I usually make pizza for my husband and myself, and we like to bake it in a cast iron pan (cast iron makes for a really nice pizza crust). A 10" or 12" pan works for two. Grease the pan lightly and press out the dough right in the pan (the fewer dishes to clean, the better). Drizzle some olive oil on top if you'd like.

Par-bake the dough for 7 minutes.

What is par-baking? It's when you bake the dough halfway (before putting any toppings). Par-baking is important! This ensures the crust doesn't get soggy and weighed down from the tomato sauce. This way you'll have a crisp and airy crust.

Remove the par-baked pizza from the oven. Spoon on the tomato sauce. I put the sauce all the way to the very edge of the pizza. It's bonus pizza "real estate."

Then put the cheese, ham, bacon, onions, and pineapple. Put as much/little of everything as you way. There's no right way to do pizza...it's just about personal preference.

Return the pizza to the oven. Bake for another 8-10 minutes. You want the top all golden. Remove the pizza onto a cutting board. Slice and enjoy! Don't forget the chili flakes ^_^ 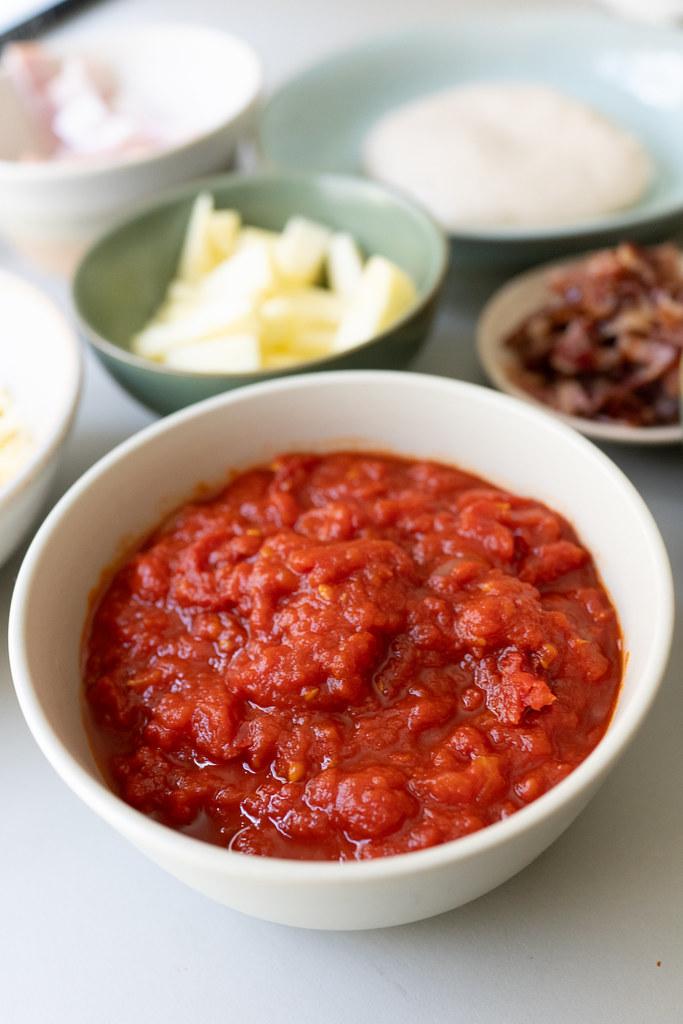 You can use any bottled pizza sauce. Or you can make your own tomato sauce at home (which is super easy). Marcella Hazan’s tomato sauce recipe is a classic - the sauce works beautifully for this pizza. Any leftover sauce you have can be used for pasta!

Open a 28 ounce can of whole peeled tomatoes*, and pour it into a pot. Add 5 tablespoons of butter and half an onion (just peel and cut the onion in half). Let it cook over low heat for 45 minutes (do not cover the pot). Stir every now and then. Most of the tomatoes will break down on their own, but you can use a wooden spoon to help break up any big pieces that are left.

Remove the onion. Salt to taste. Let the sauce cool. It's ready to be used for the pizza!

*We use whole peeled tomatoes a lot. The same type of tomatoes also appear in this recipe for One Pot Lamb Stew and Local Beef Stew. For whole peeled tomatoes, I usually buy Bianco DiNapoli or San Marzano. The 365 brand is not as delicious as the other two but it's way more affordable. Any of these three will work ^_^ 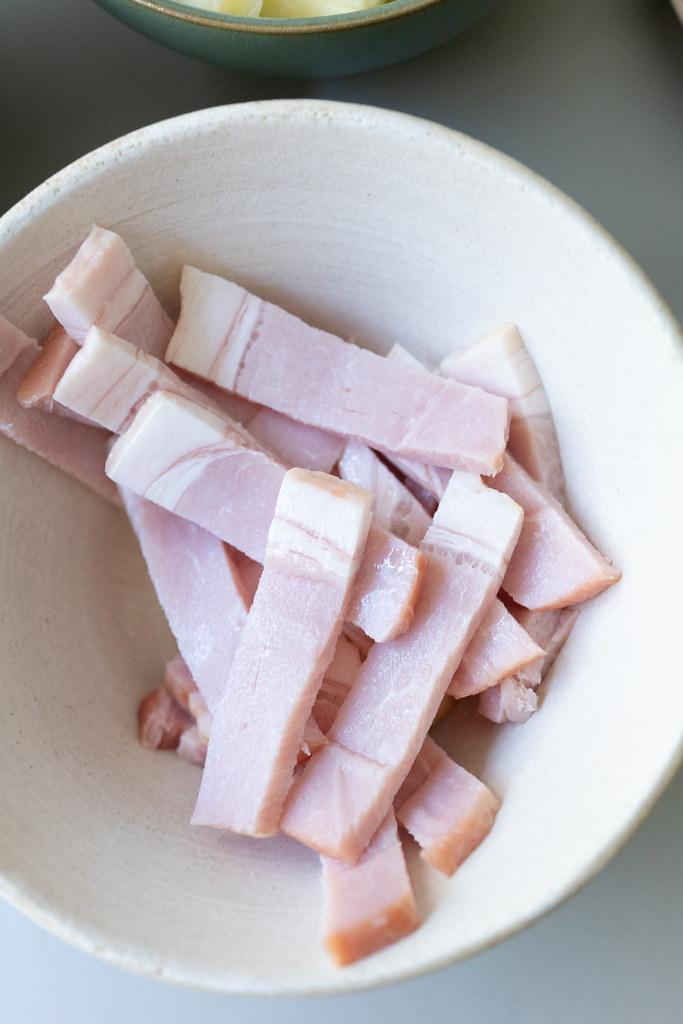 Are you familiar with Canadian Bacon? Canadian Bacon is similar to ham (but not bacon, go figure) in both looks and taste, and I'm crazy about it. Here's the difference between the three:

You can use ham or Canadian Bacon (my personal preference) for this recipe. 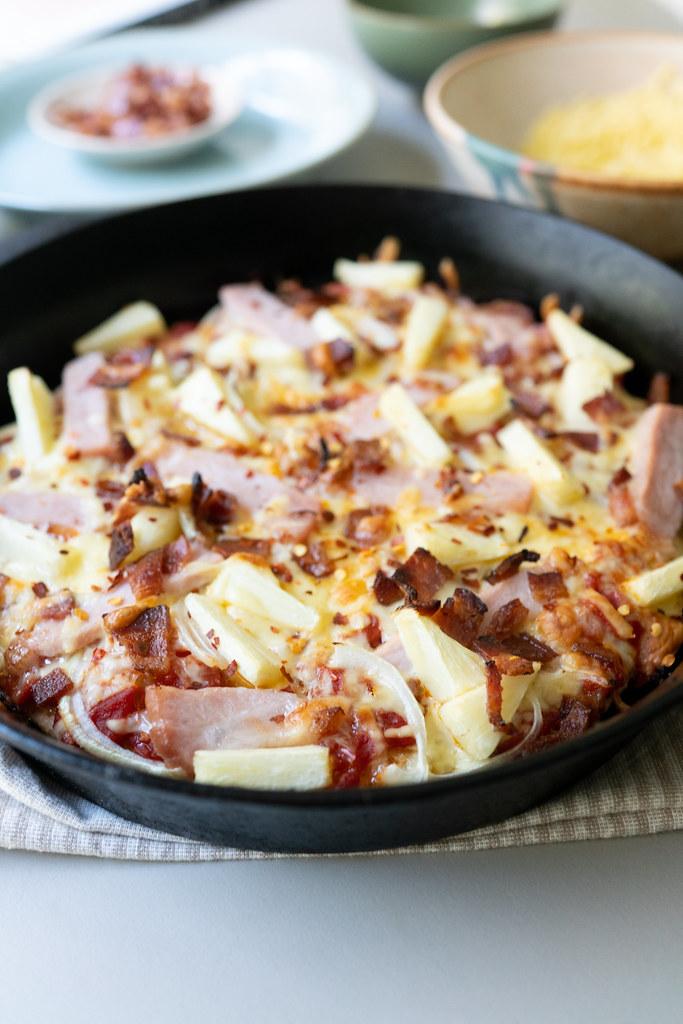 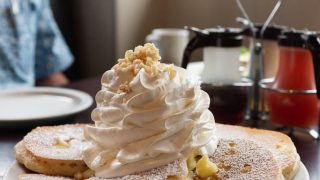 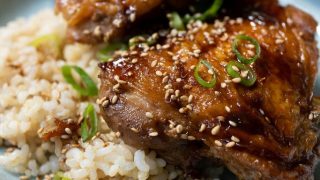 Next →
Shoyu Chicken
Mahalo for Reading!Click here to cancel reply.